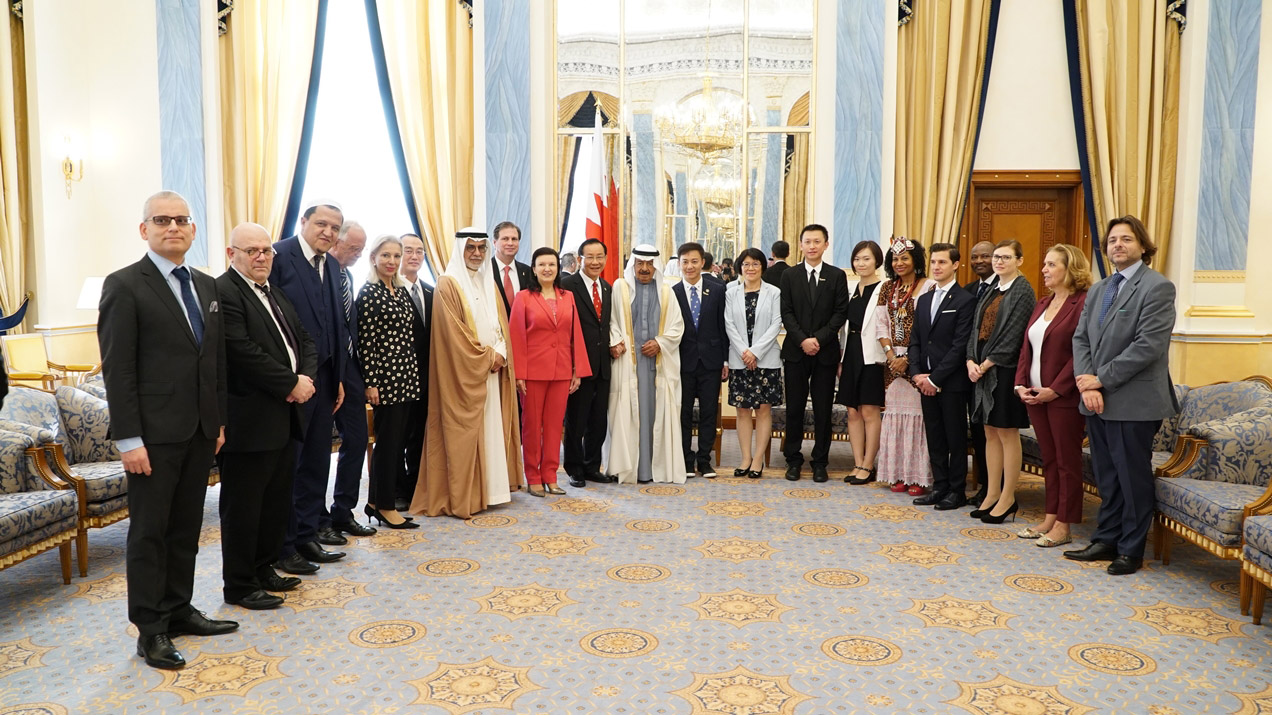 (By Yu Chen, Bahrain) In November 2018, Dr. Hong, Tao-Tze, President of the Federation of World Peace and Love (FOWPAL), led FOWPAL delegates to visit the Kingdom of Bahrain. On November 27, at the Gudaibiya Palace, H.R.H. Prince Khalifa bin Salman Al Khalifa, Prime Minister of Bahrain, received the FOWPAL delegation and other dignitaries from various nations, including Dr. Werner Fasslabend, former Austrian Minister of Defense, and his wife; Their Imperial Royal Highnesses Sandor and Herta Margarete Habsburg-Lothringen; H.R.H. Queen Diambi Kabatusuila of Kasai Kingdom of the Democratic Republic of Congo; and H.H. Prince Bernard Ndouga from Cameroon. 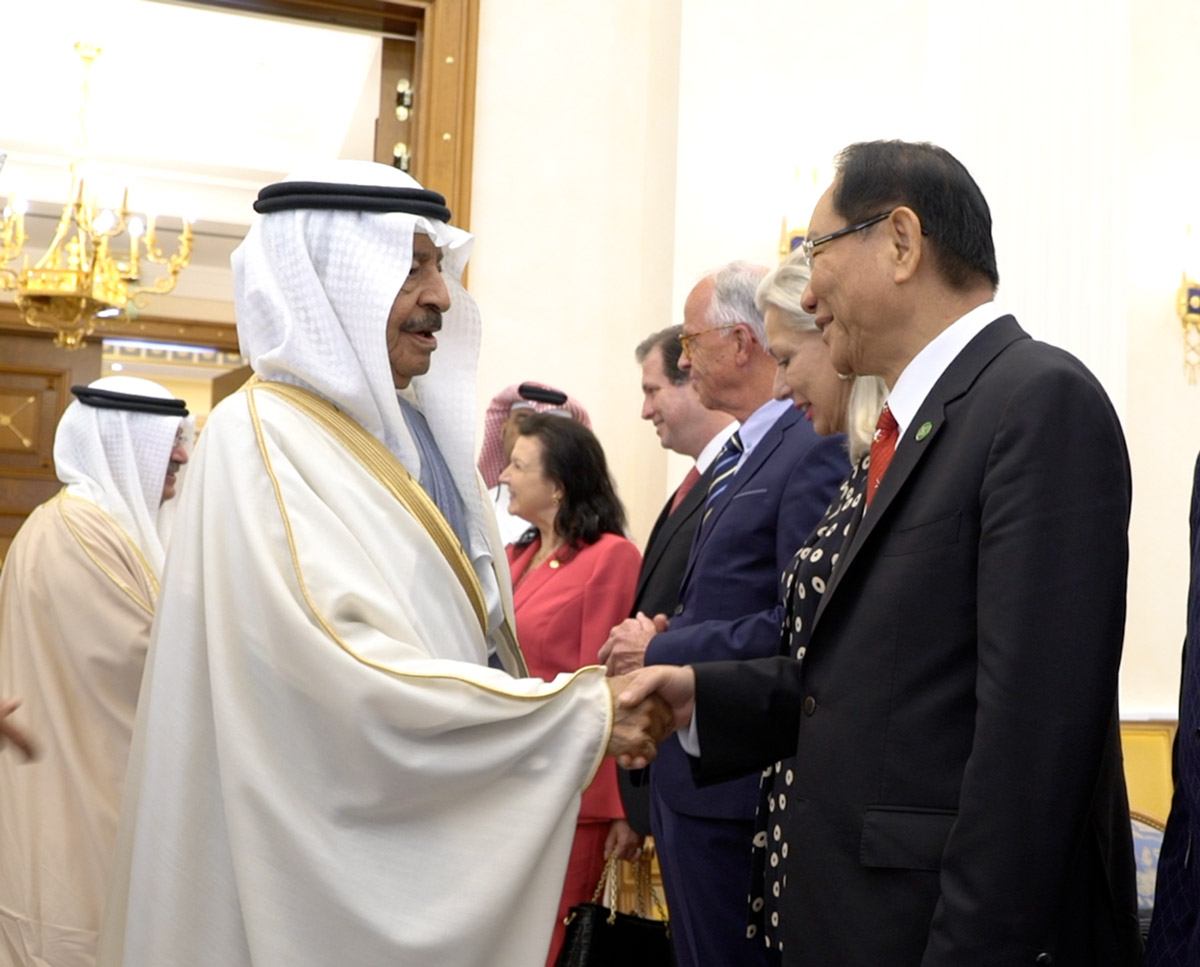 H.R.H. Prince Khalifa bin Salman Al Khalifa welcomed the visit of the FOWPAL delegation and other honored guests and stressed that such visits and meetings are important as they help promote world peace through dialogues and exchanges of visions. Dr. Hong commended His Royal Highness for leading Bahrain to accomplish remarkable achievements in the past nearly five decades. Under the leadership of His Royal Highness, Bahraini society is open and free, fostering peaceful coexistence, encouraging tolerance and acceptance of people of different backgrounds, and boasting a fast growing economy, free public education, extensive welfare system, etc.

His Royal Highness mentioned to Dr. Hong and the FOWPAL delegation that the Middle East has experienced the devastation and cruelty of wars, so Bahrain understands the importance of peace and sustainability and has built collaborative relationships with other countries. His Royal Highness encouraged all the guests to continue working closely together for peace.

Bahrain, one of the most inclusive and tolerant Islamic countries in the Middle East, is known for its cultural and religious diversity, with foreigners comprising more than half of its population. This was the second time that Dr. Hong led the FOWPAL delegation to visit the Kingdom of Bahrain. The delegation's first visit to the kingdom was in 2017. Since then, FOWPAL, in cooperation with Bahrain, has hosted multiple international meetings and cultural events. Sharing the same vision and mission for peace, FOWPAL and Bahrain have strived to preserve cultural heritage and promote the harmonic coexistence of different cultures and religions. For this reason, the Court of H.R.H. the Prime Minister invited the FOWPAL delegation to visit Bahrain to exchange ideas on building a peaceful world.

Dr. Hong presented the World Peace Culture Award to H.R.H. Prince Khalifa bin Salman Al Khalifa in recognition of his dedication in the past half century to cultural heritage conservations, promoting stability and harmony among the communities, and taking the lead in establishing the financial and harmonious cultural center in Arab region. The award was received by H.E. Shaikh Hussam Bin Isa Al Khalifa, the president of the prime minister’s court, on behalf of the H.R.H Prince Khalifa Bin Salman Al Khalifa.  Bahrain This Week, a weekly local magazine, specially ran a full coverage on the cover and the first section of issue 223 on Oct. 15, 2017 to highlight the awarding of World Peace Culture Award to the Prime Minister. (For more details, please check https://www.bahrainthisweek.com/wp-content/uploads/2017/10/BTW_223.pdf)

The World Peace Award Won by the Kingdom- Special Report by Bahrain This Week (October 15, 2017,Issue 223)

While the 72nd UN General Assembly was in session, His Royal Highness the Prime Minister's Court of Bahrain held a function of love, peace, and cultural exchanges with the Federation of World Peace and Love (FOWPAL) on Sept. 19, 2017 in New York. FOWPAL conferred a shield on HRH the Premier in recognition of his landmark contribution to promoting the traditions of peace, tolerance and diversity. 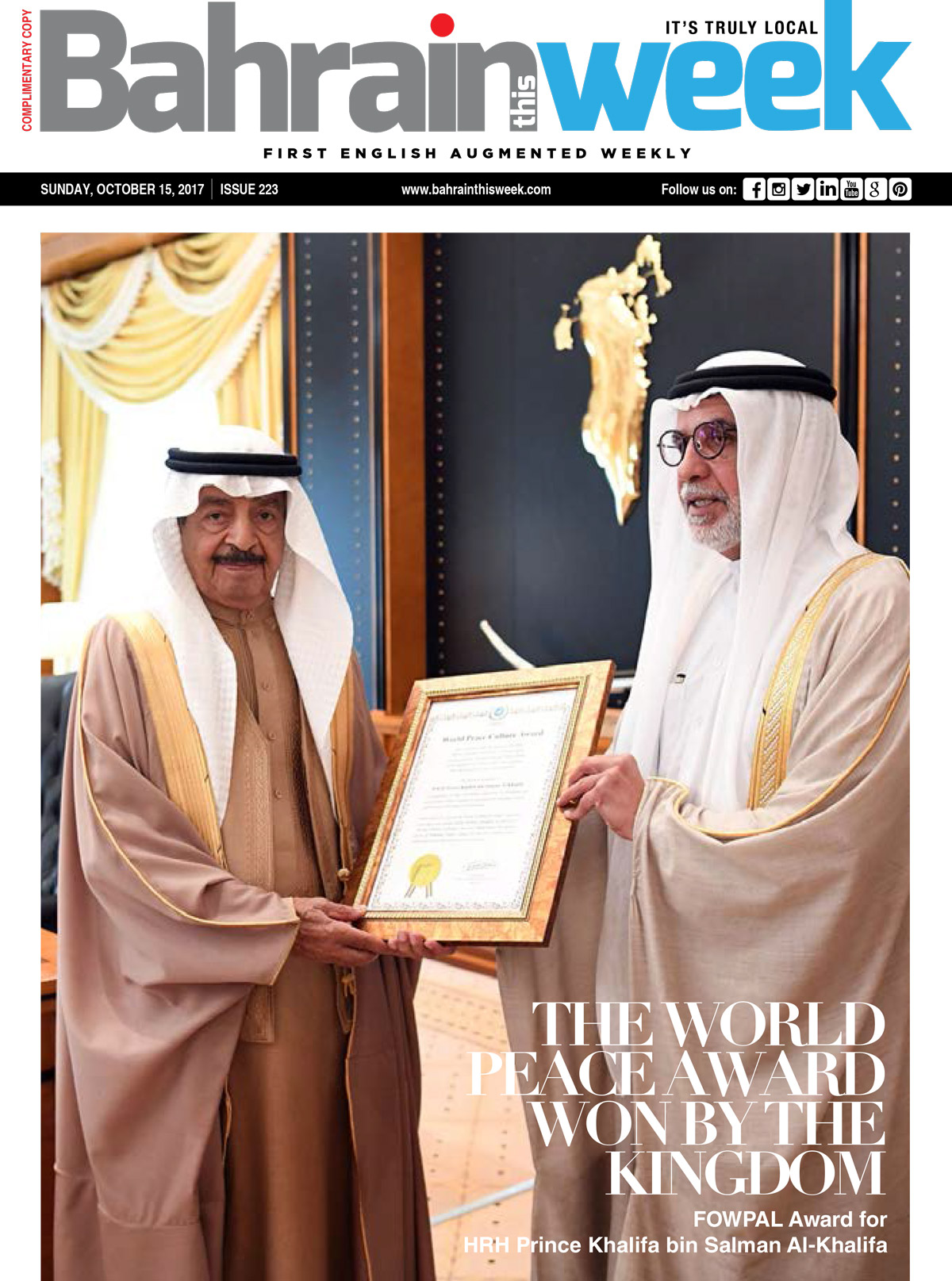 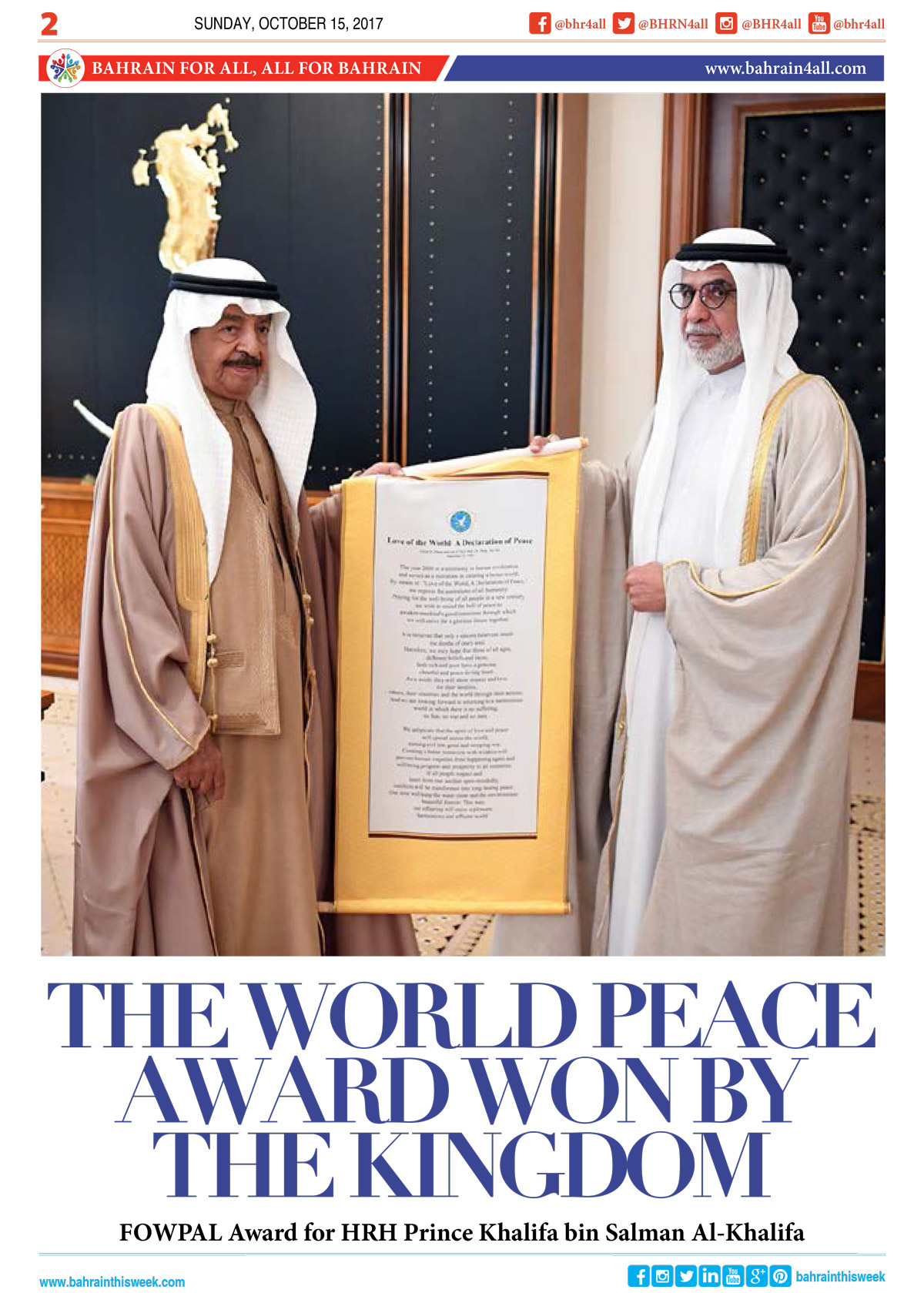 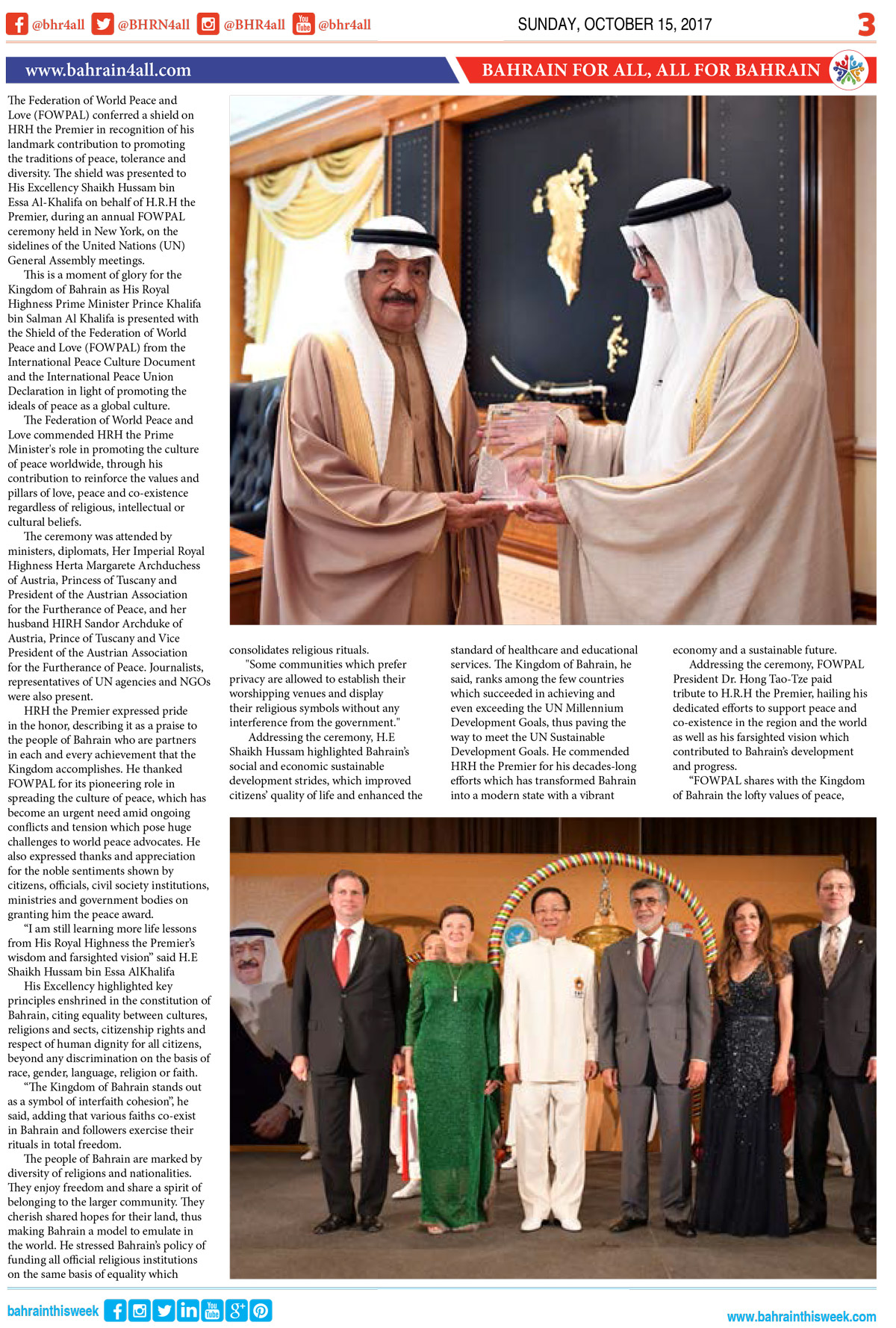 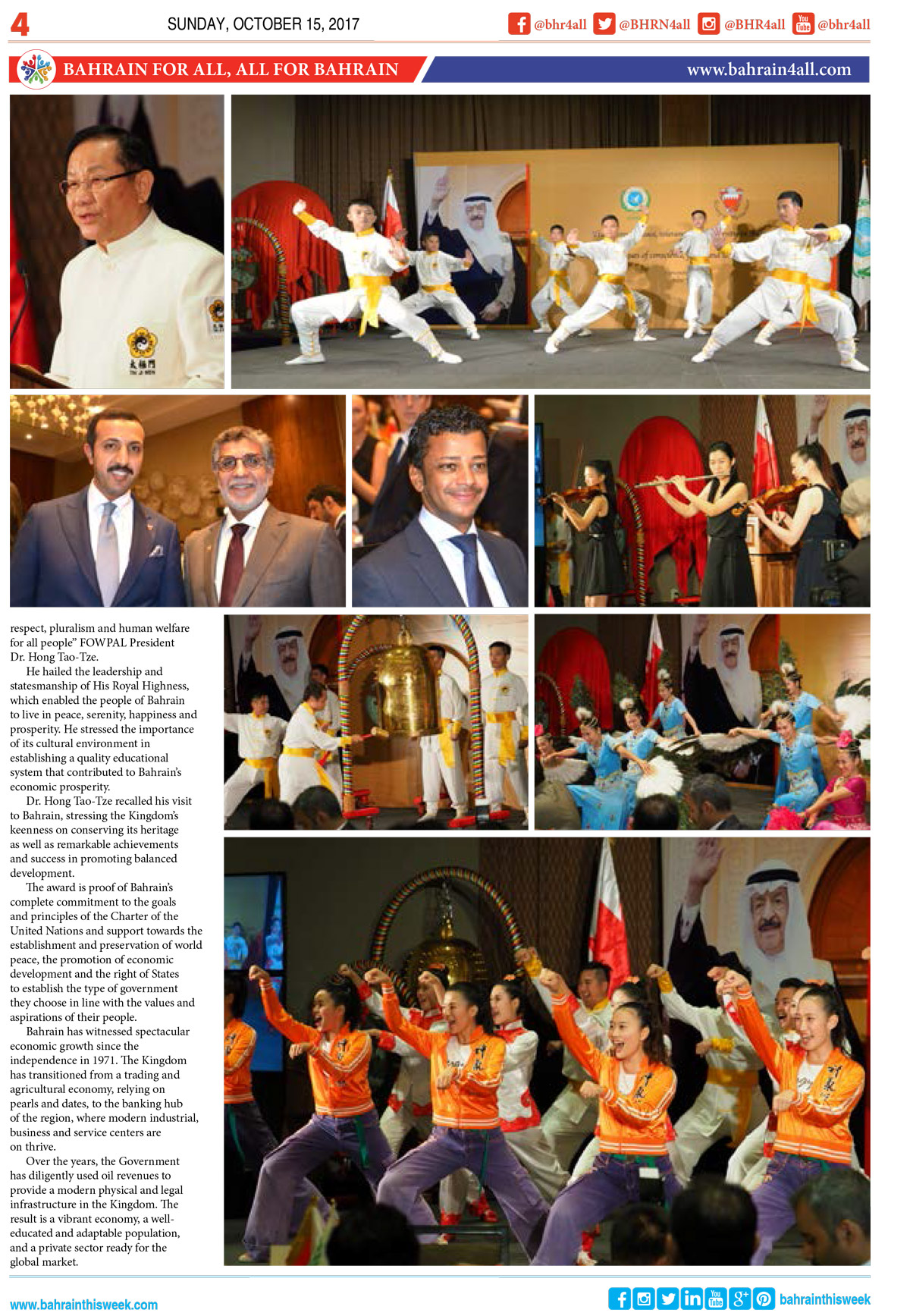 〔Video〕FOWPAL Delegation Holds a Dialogue of Peace with Bahrain PM