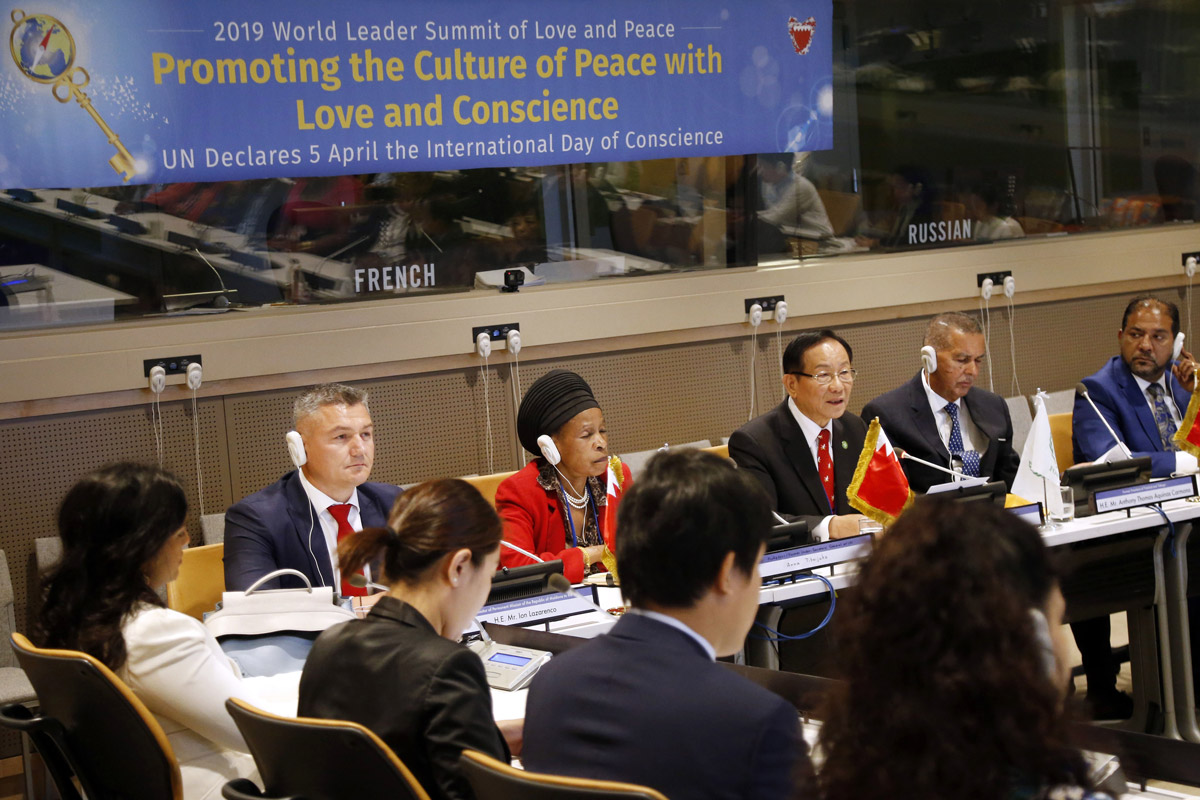 The Federation of World Peace and Love (FOWPAL), in cooperation with the Permanent Mission of the Kingdom of Bahrain to the United Nations, hosted the World Leader Summit of Love and Peace at the United Nations on September 26, 2019 during the 74th UN General Assembly to celebrate the UN’s adoption of a resolution titled “Promoting the Culture of Peace with Love and Conscience” and designation of April 5 as the International Day of Conscience.

Holding such a conference during the first annual session of the UN General Assembly after the passage of the resolution was especially significant. Dr. Hong, Tao-Tze, President of the FOWPAL, welcomed leaders of conscience from around the world as they celebrated the historic day together. Dr. Hong extended his gratitude to Bahrain for co-hosting the conference and expressed his admiration for H.R.H. Prince Sheikh Khalifa bin Salman Al Khalifa, the Prime Minister of Bahrain, for achieving his vision of the adoption of the International Day of Conscience by the UN. 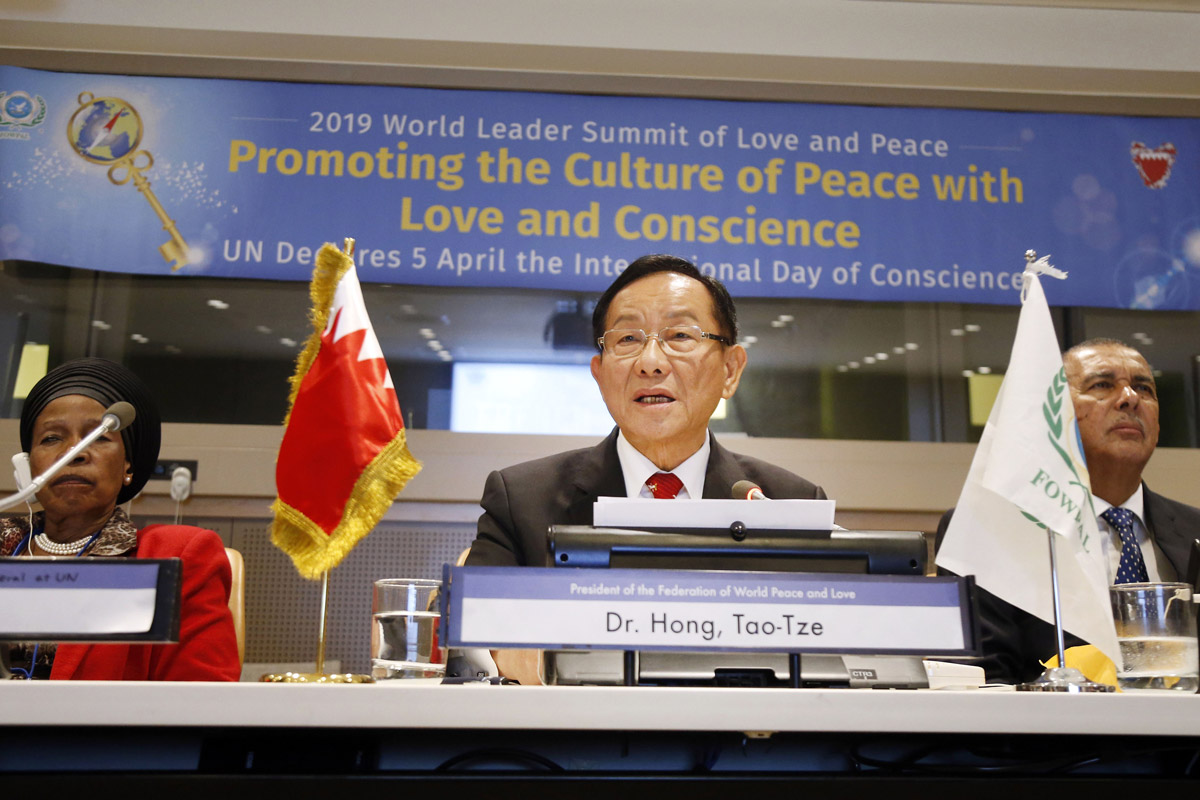 FOWPAL received congratulatory letters from many world leaders, including the Secretary-General of the United Nations; the Presidents of Guyana, Ireland, Malta, and Portugal; the King of the Netherlands; the Queen of the United Kingdom; the Prime Ministers of the Czech Republic, New Zealand, Slovenia, Trinidad and Tobago, and the United Kingdom; the Governor Generals of Australia, Canada, Grenada, Jamaica, and New Zealand; the Taoiseach of Ireland; the Grand Duke of Luxembourg; and the Prince of Wales.

The theme of this year’s UN General Assembly is “Galvanizing Multilateral Efforts for Poverty Eradication, Quality Education, Climate Action and Inclusion.” Dr. Hong advocated that conscience is the antidote to many problems. He emphasized that conscience “gives us wisdom. It is the most important wellspring from our hearts that enables us to settle conflicts. It provides solutions to current world issues by revealing the root of the problems. Conscience resides in everyone’s heart. Only when we look at our commonalities, can we treat one another as brothers and sisters regardless of our differences in race, language, or culture. Conflicts can, thus, be settled with love, tolerance and wisdom. With unity, cooperation, and global partnerships, global crises can be resolved, and a harmonious world can be a reality.” 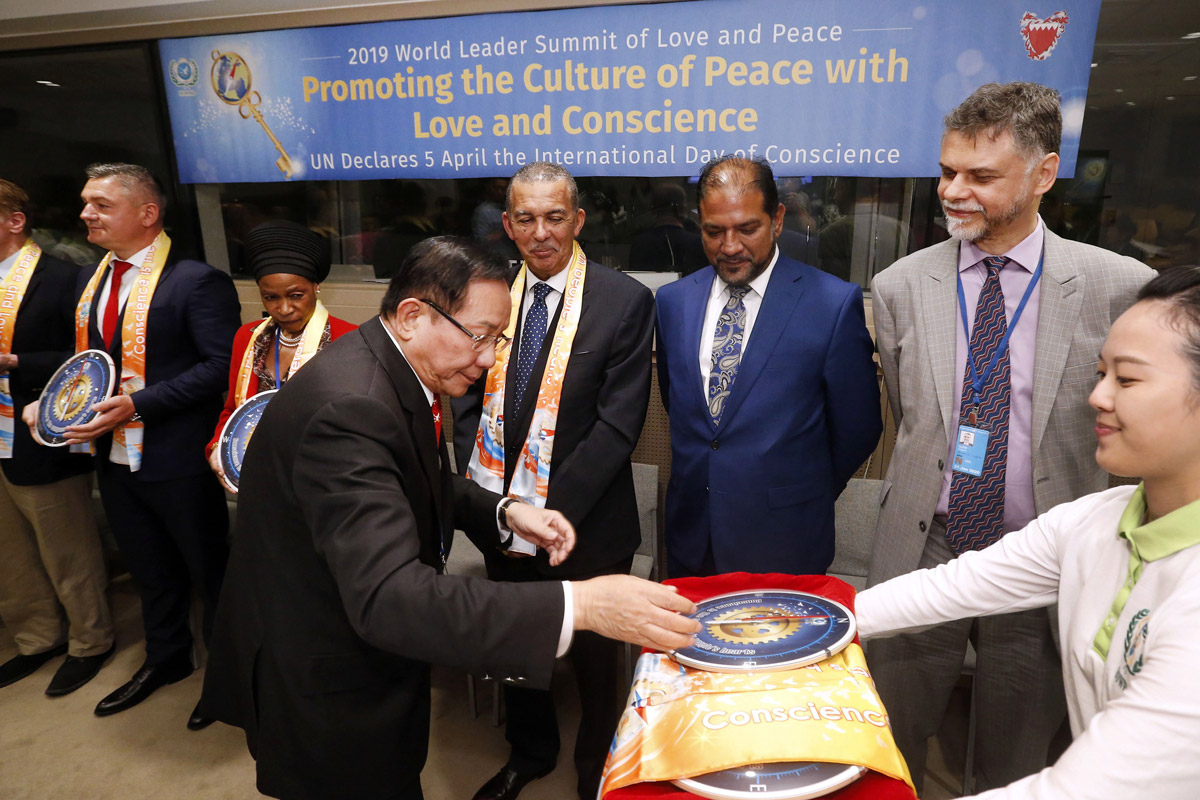 Several honored guests also shared their thoughts about how to promote the International Day of Conscience. Regarding the issues of wars and violence, H.E. Mr. Anthony Thomas Aquinas Carmona, former President of Trinidad and Tobago, stressed that “The solutions can be found in each and every one of us, in our hearts, in our lives, and most of all, in our conscience.” “Implementation! Implementation! Implementation!” said Ms. Anna Tibaijuka, former Under-Secretary-General of the United Nations, as she reminded everyone that since the resolution was passed, the mandate has been given and the international community needs to put it into practice. Mr. Ion Lazarenco, a candidate for the Nobel Peace Prize 2019, urged people to take actions and bring positive changes to the world by saying, “We need to wake up and start doing things for each other, love and care for one another.” Mr. Syed Omair Hassan, Assistant Director at NYC Mayor’s Office of Management and Budget, said, “I’m here tonight because I am an ambassador of love and peace.” He pointed out the importance of conscience education by saying that “we need to plant those seeds in the hearts of our children.” During the discussion segment, Dr. Zekeh Gbotokuma, Founder of Polyglots in Action for Diversity; Harlem's Queen Mother Dr. Delois Blakely; Mr. Rick Ulfik, Founder of We, The World; Dr. Scott Carlin, Associate Professor of Geography at Long Island University; and Ms. Bircan Unver, Founder-President, TV Producer and Head NGO Representative to the UN DPI The Light Millennium, also shared their thoughts about conscience. 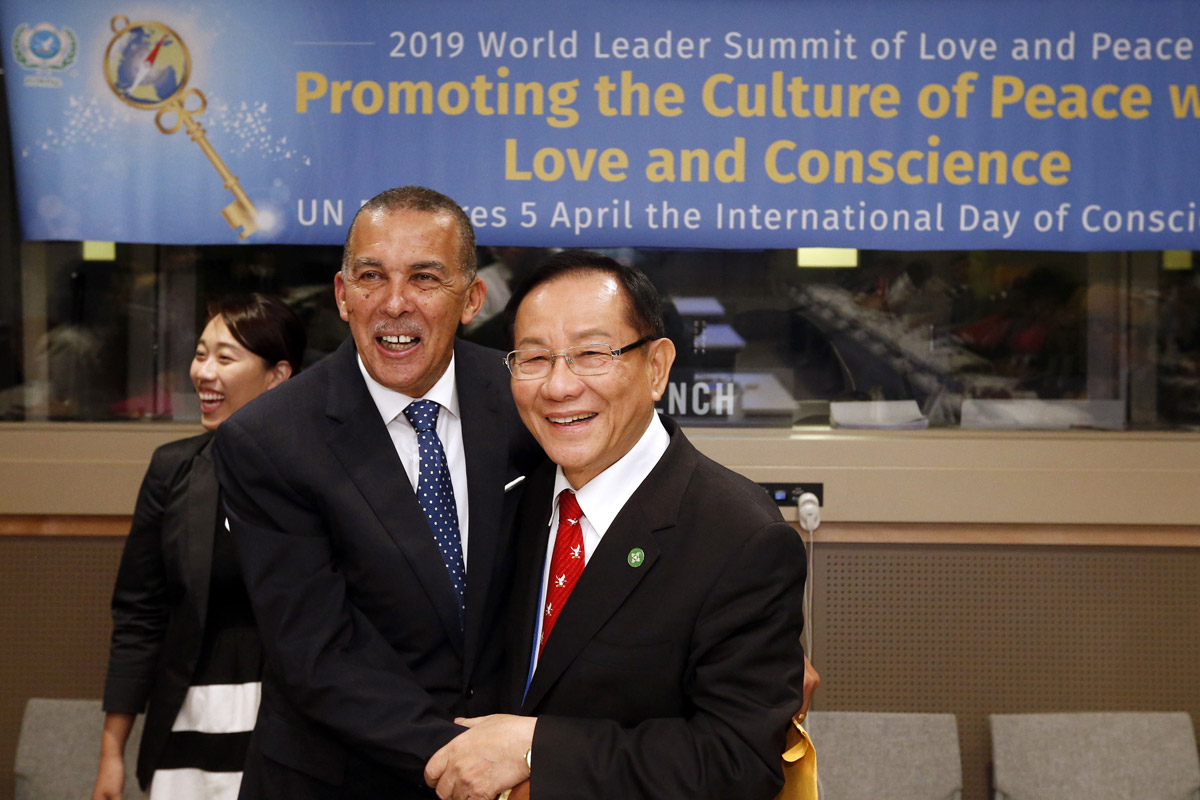 For the International Day of Conscience, FOWPAL specially designed the “compass clock of conscience.” A group of FOWPAL youth volunteers gave a poetic presentation of the meaning of the clock: "The compass clock of conscience represents time, direction and goal. It symbolizes that conscience is the guide that leads us toward the right path of life, harmony and truth. It constantly reminds us to return to our hearts, do good deeds and make wise decisions. It also serves as a reminder of the brevity of life, prompting us to be aware and act at once. Opportunities are to be created, not awaited. The prosperity of humanity calls for the awakening of conscience and positive actions. We must seize every moment in life to create profound and positive impacts. Let us work together to create peace and harmony for ourselves and the world." 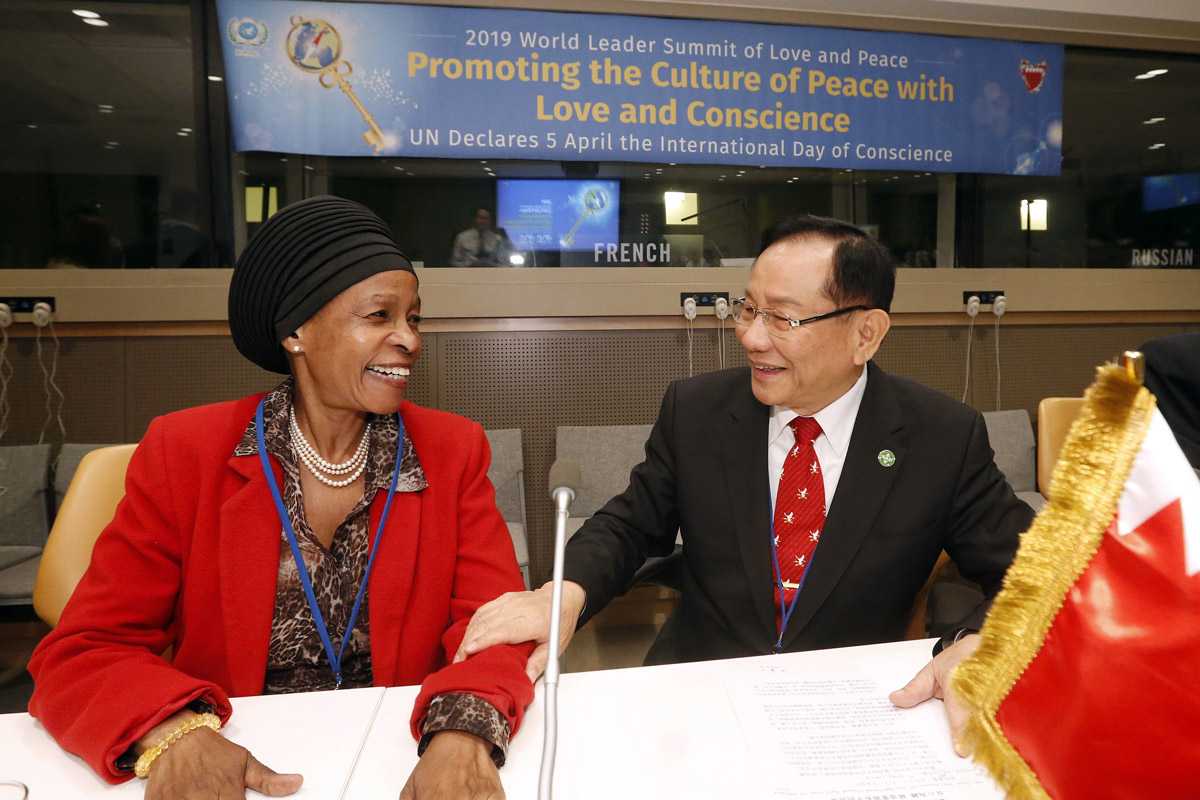 It is crucial to promote the concept of conscience; therefore, FOWPAL made an illustration book titled “Be the Spark,” which is about a little bear’s journey to discover that everyone can spark changes in the world with his/her beautiful heart. Many people who received the book think it is a very cute book and serves as a great tool to educate younger generations to follow their hearts to transform the world. 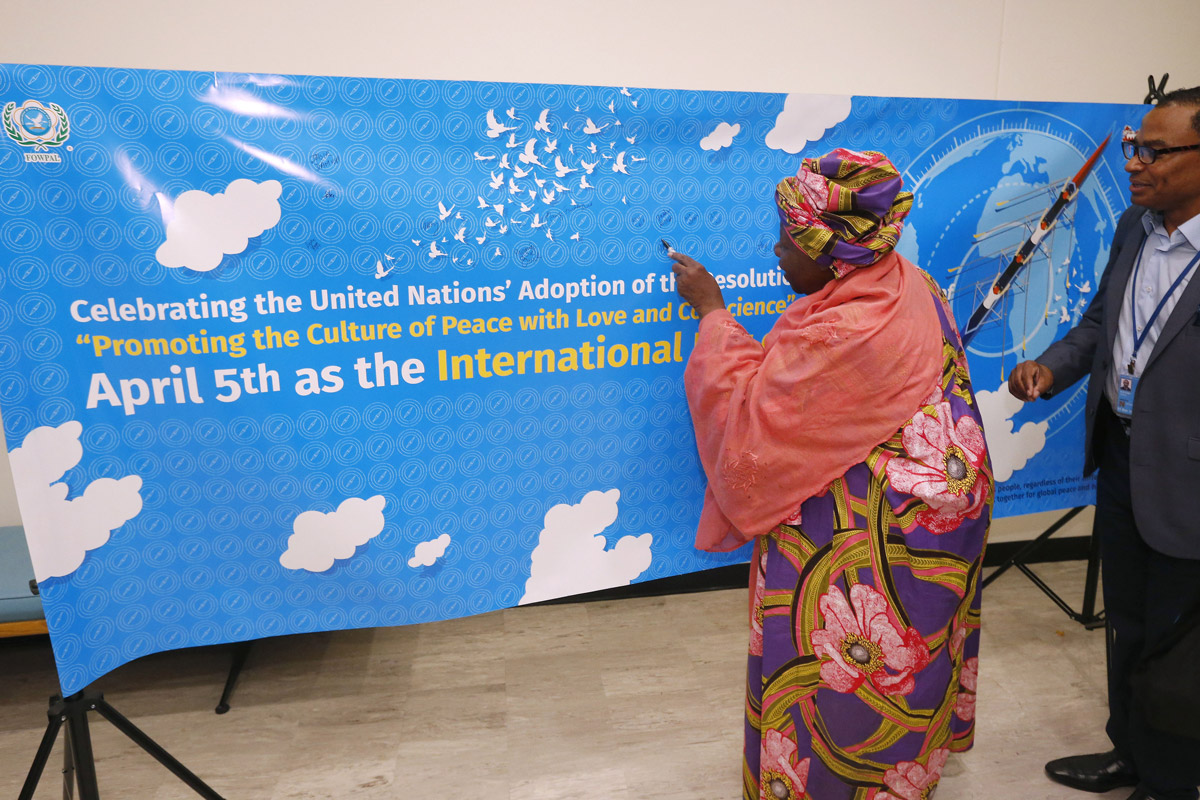 At the end of the event, when interviewed, Mr. Ion Lazarenco, a candidate for the Nobel Peace Prize 2019, said, “My heart is actually blooming and exploding in happiness" "It makes me emotional to see how many people from all over the world, no matter race, religion, culture, we came here together today and I understood one thing that yes we can, yes we can. With conscience and love we’re gonna be spreading everywhere in the world,” added Lazarenco.

During the 74th session of the UN General Assembly, the International Day of Conscience has been widely promoted, and leaders from around the world have become more aware of the importance of conscience in the attainment of peace. FOWPAL will continue to promote the culture of peace with love and conscience and encourage people to endorse the Declaration of International Day of Conscience, which has been translated into 41 languages and endorsed by people in 166 nations. Below is the link to the endorsement page: http://www.fowpal.org/Endorse/doidoc_endorse/index.php