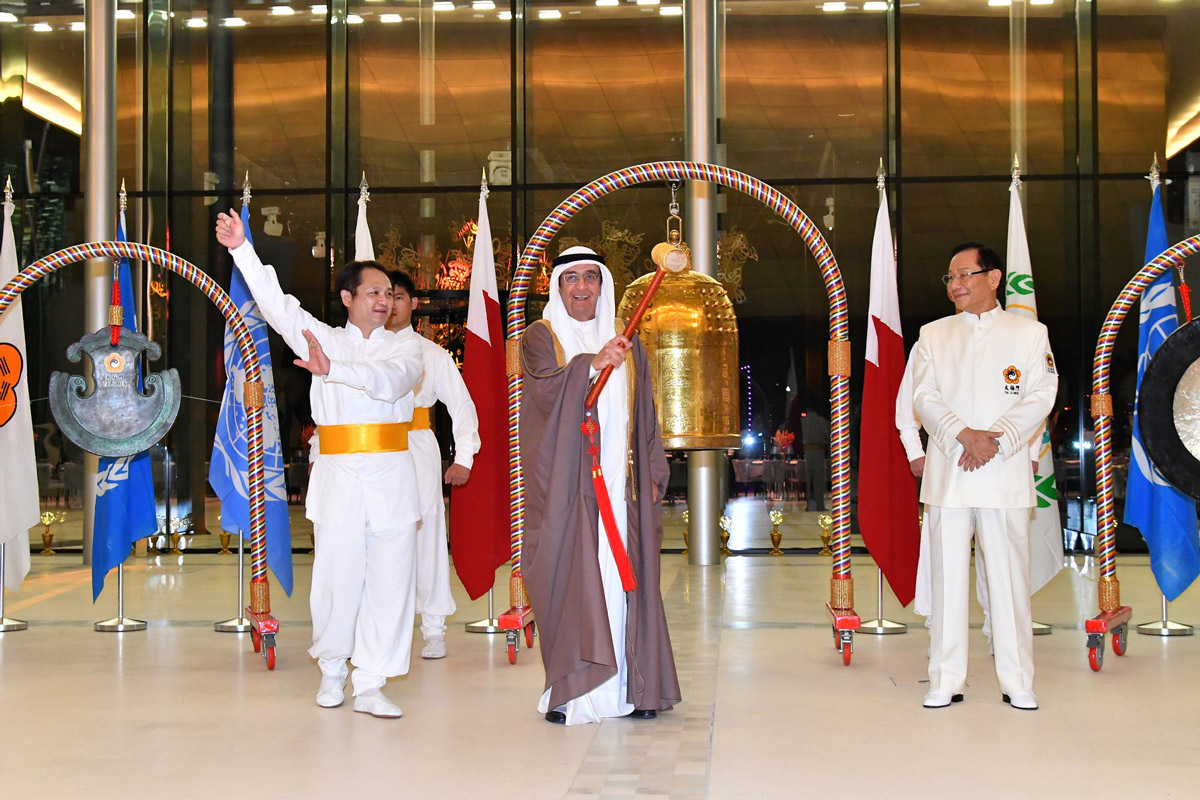 (By Wenny Tsai, Bahrain)
The Bell of World Peace and Love reverberated in the Kingdom of Bahrain in the Persian Gulf as the closing ceremony of the Celebration of Muharraq as the Capital of Islamic Culture for 2018 culminated with an extraordinary session on November 28. The Bahrain Authority for Culture and Antiquities (BACA) had invited the Federation of World Peace and Love (FOWPAL) to conduct the Bell of World Peace and Love ringing ceremony, at which H. H. Shaikh Mohammed bin Mubarak Al Khalifa, Deputy Prime Minister of Bahrain, became the 334th Bell Ringer. Over the years, Dr. Hong, Tao-Tze  has led FOWPAL in travelling around the globe to invite world leaders to ring the Bell of Peace and make and carry out commitments to peace. 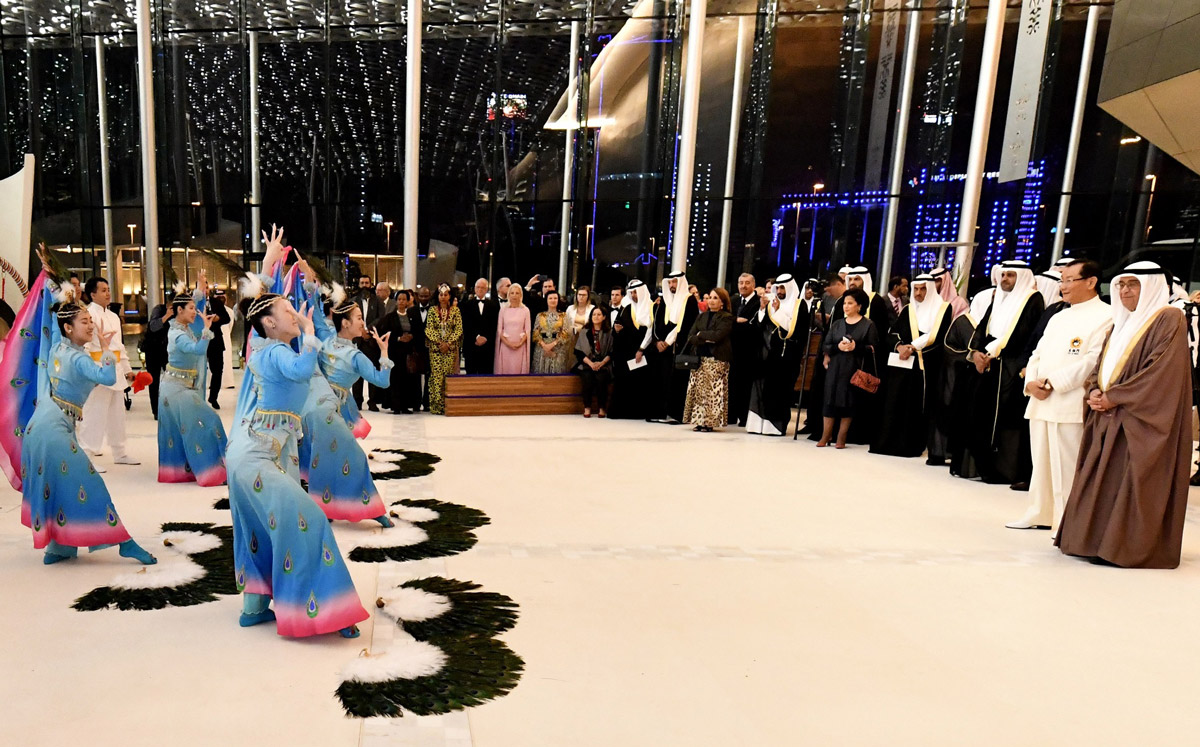 “I hope year 2019 will be a year of peace,” said H. H. Shaikh Mohammed bin Mubarak Al Khalifa while ringing the Bell of Peace. His Highness believes that world peace can be achieved through cooperation between diverse nations, peoples, and religions. Up to the present day, 334 prominent leaders from 104 countries have rung the Bell of Peace, including 41 heads of states and governments, seven Nobel Peace Prize laureates, UN Ambassadors, and world leaders in various fields.

The delegates of the Ministries of Culture of 44 UN members, along with 14 NGOs, were invited to the November 28 closing ceremony of the Celebration of Muharraq as the Capital of Islamic Culture for 2018 at the Bahrain National Theater, for which BACA organized spectacular cultural events, including the Bell of Peace ringing ceremony conducted by FOWPAL. Dr. Hong, President of FOWPAL, hosted the ceremony, which began with a “Peacock Dance” by FOWPAL youth volunteers. 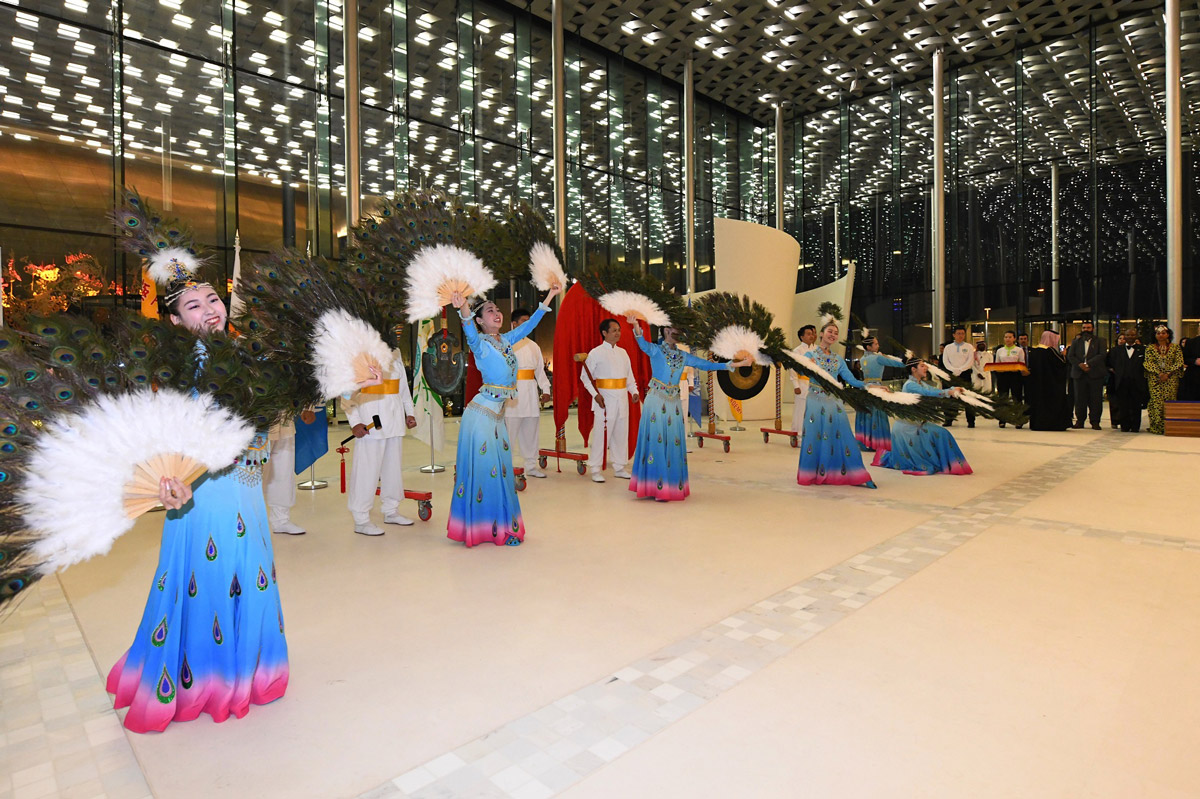 Through beautiful movements and peaceful smiles, the dance demonstrated the spirit of peacock, the auspicious bird that “tastes all poisons but pours out fragrance.”  FOWPAL volunteers also demonstrated the spirit of knights through a martial-arts performance, using boxing, rods, and kung fu fans in an exquisite display of traditional culture. Embracing martial arts as well as the cultivation of the mind, FOWPAL’s culture of peace highlights the promise of “stopping conflicts and promoting goodness,” a sentiment that inspired thunderous applause from the audience.

During the Bell of Peace ringing ceremony, Dr. Hong presented the Cultural Contribution Award to H. E. Shaikha Mai Bint Mohammed Al Khalifa, BACA’s president, in recognition of her efforts to preserve and promote Bahraini culture. Shaikha Mai expressed her admiration of the ceremony, commenting that it was “wonderful” and wishing everyone love and peace. 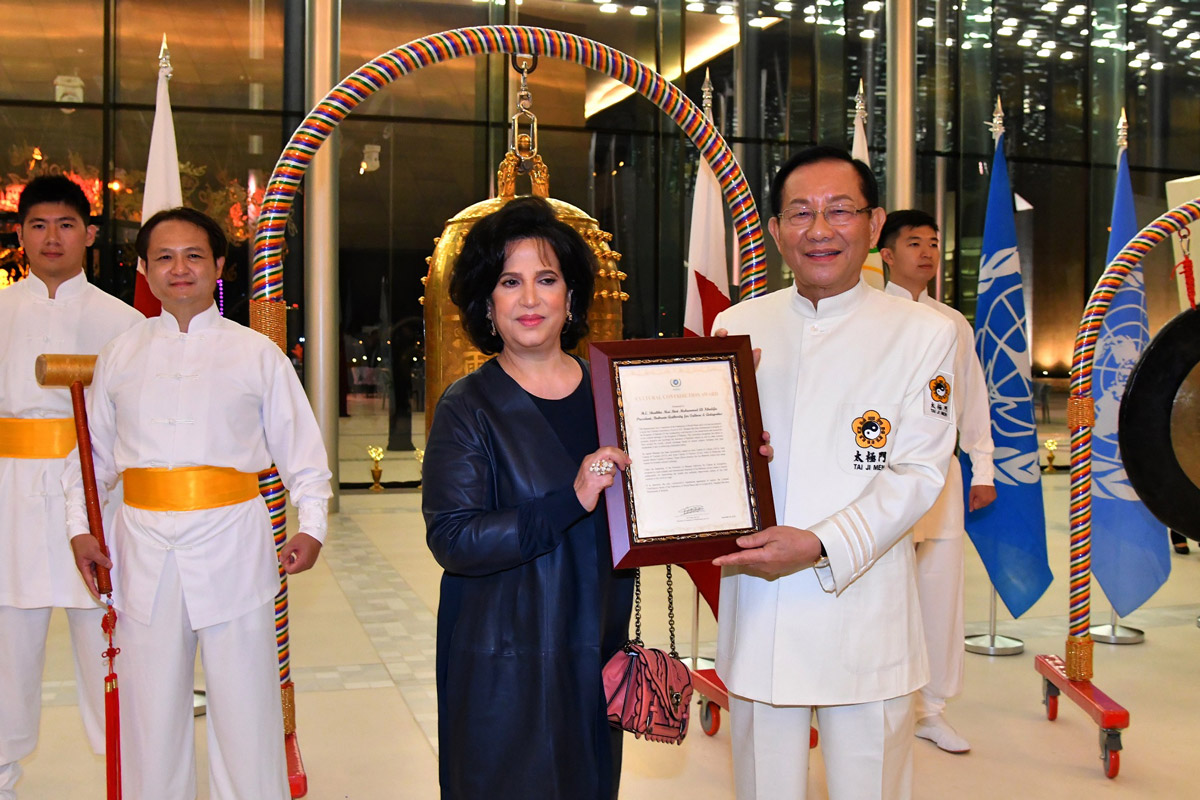 H. E. Dr. Abdulaziz Othman Altwaijri, Director General of the Islamic Educational, Scientific, and Cultural Organization (ISESCO) was also moved by the ceremony. His Excellency stated that “the world is suffering from hatred, killings, wars, and xenophobia. Peace is an essential factor for bringing people together, to know each other, to cooperate, to make our lives fine for everybody. Therefore, this event is a symbol for the whole world to give peace the appropriate place in their lives.”

The Minister of Culture of Mali, H. E. N'Diaye Ramatoulaye Diallo, described as “magical” the Bell of Peace ringing ceremony.

She said, “The themes of peace and love are what united all of us here. All the Islamic countries, Islamic ministers are gathering here…. Only culture is the means to get to peace and love. Military ways have been there for years, but culture has been there for lives ever since the world was created.” 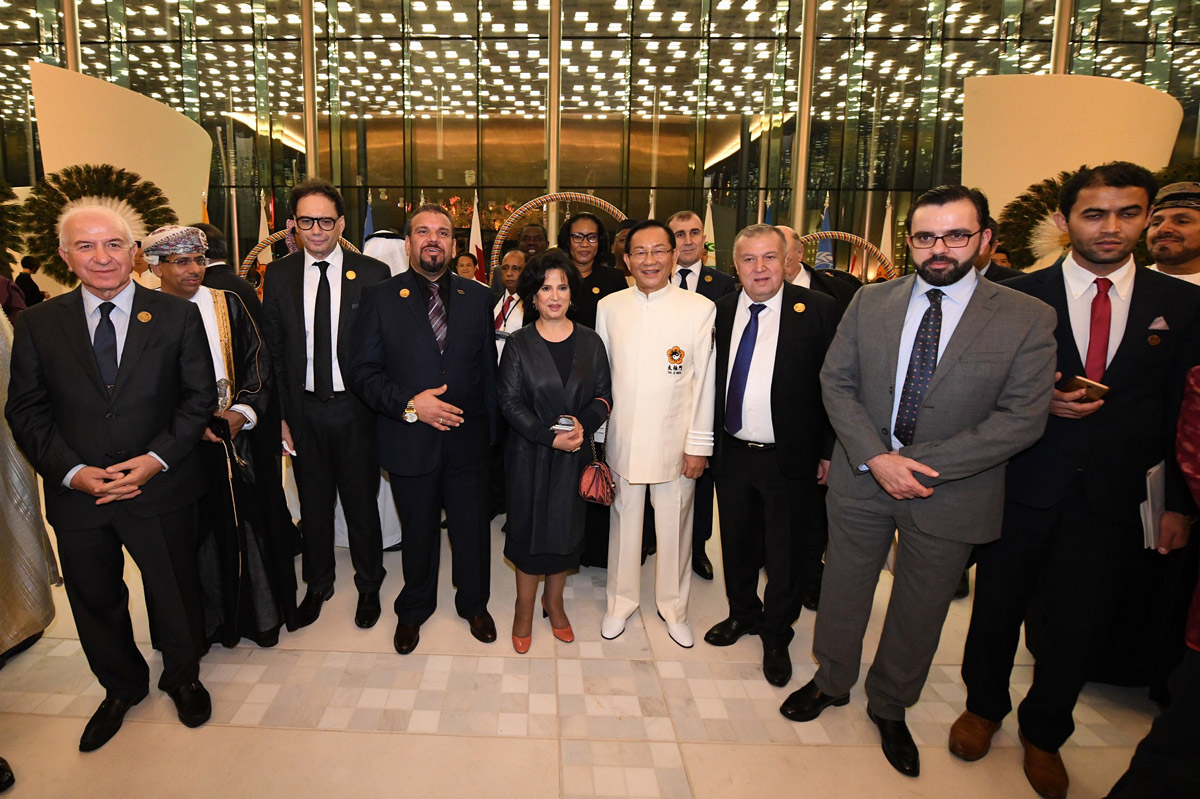 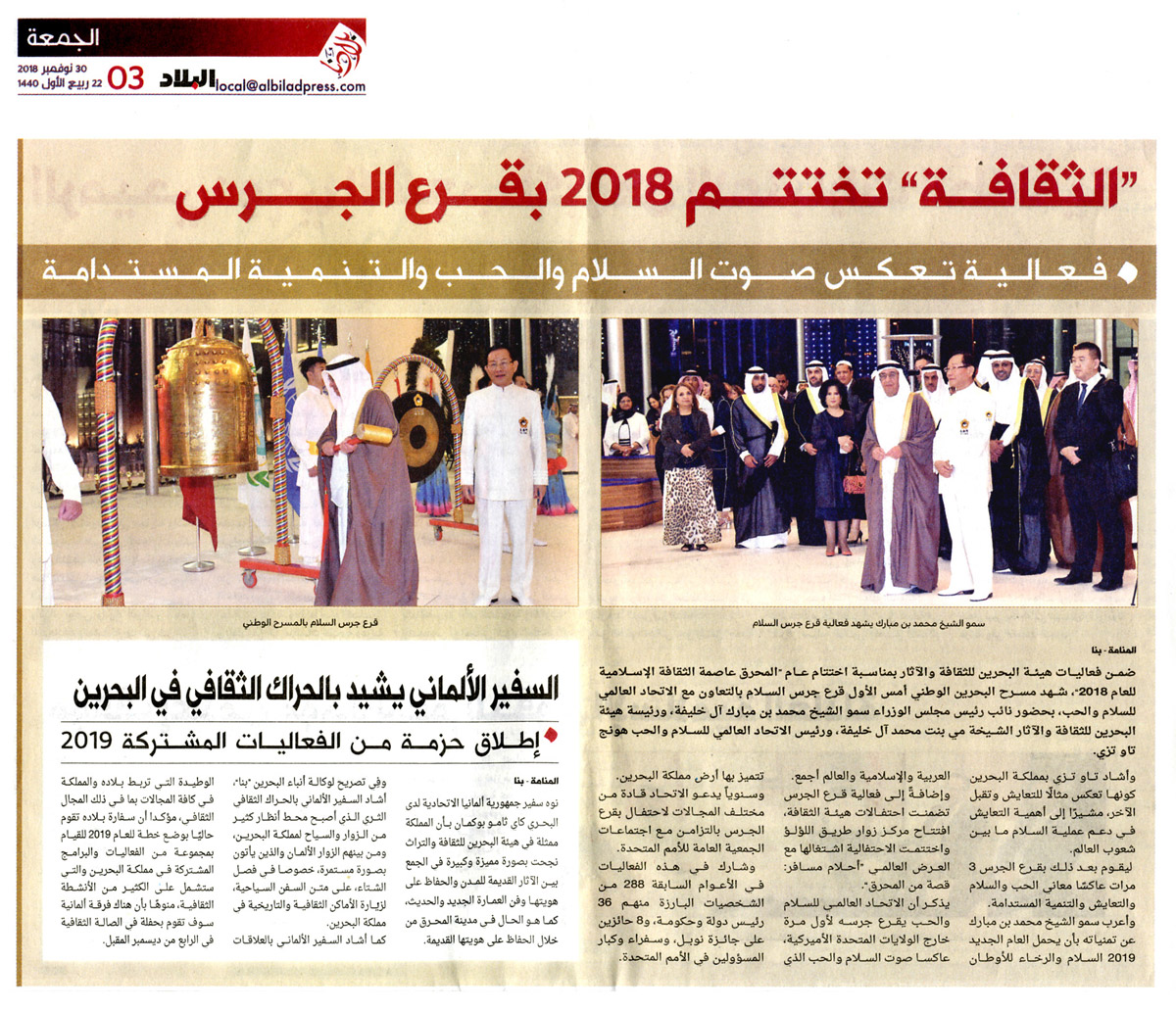 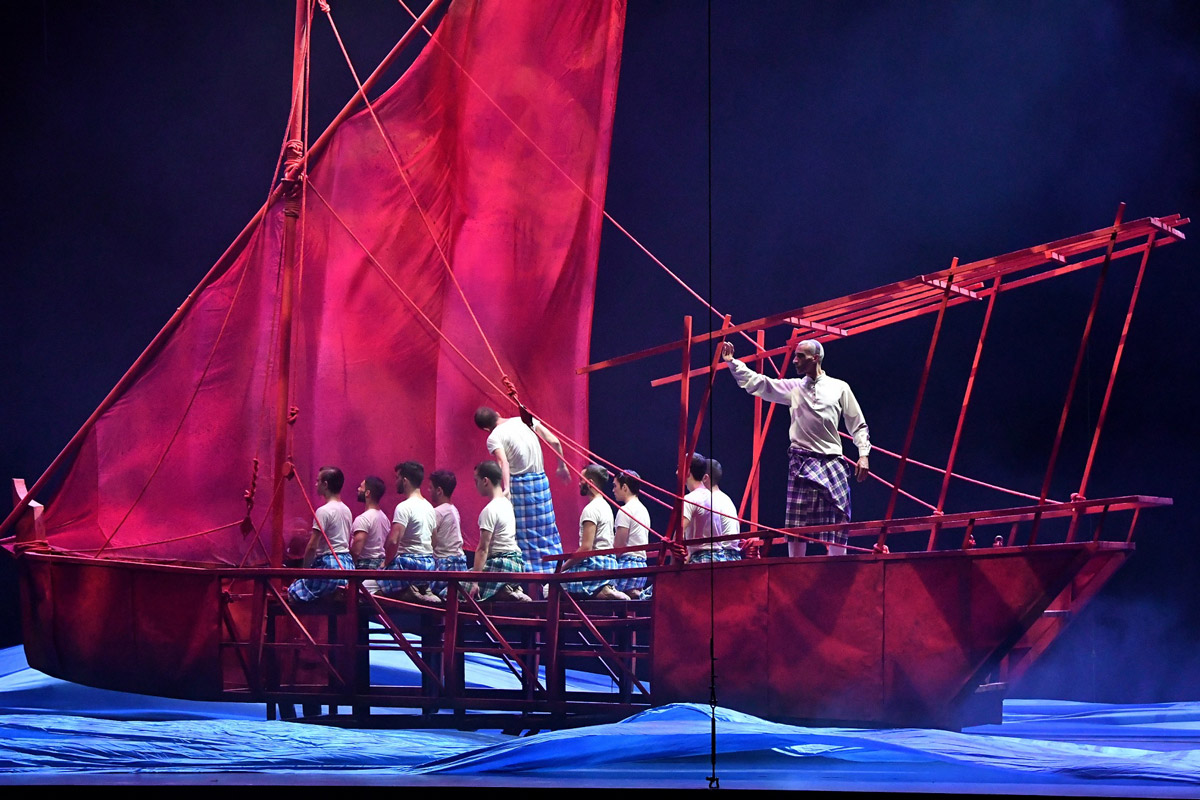 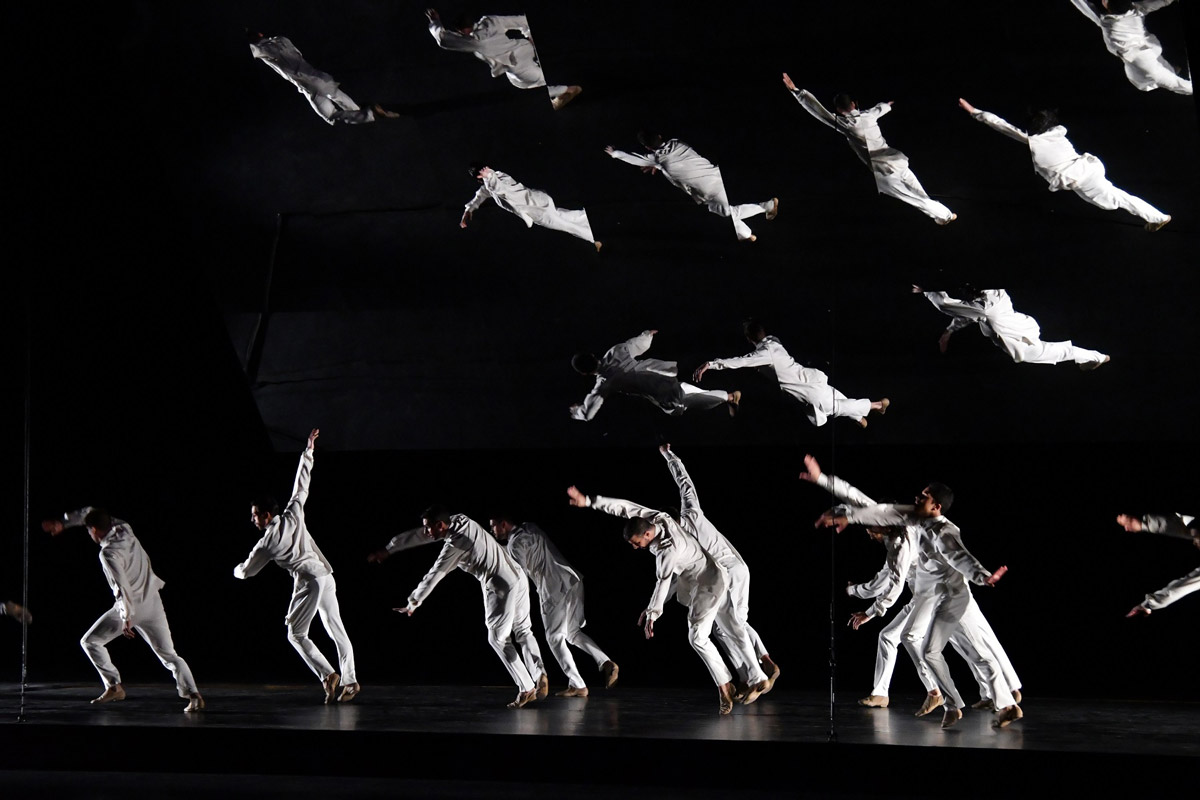