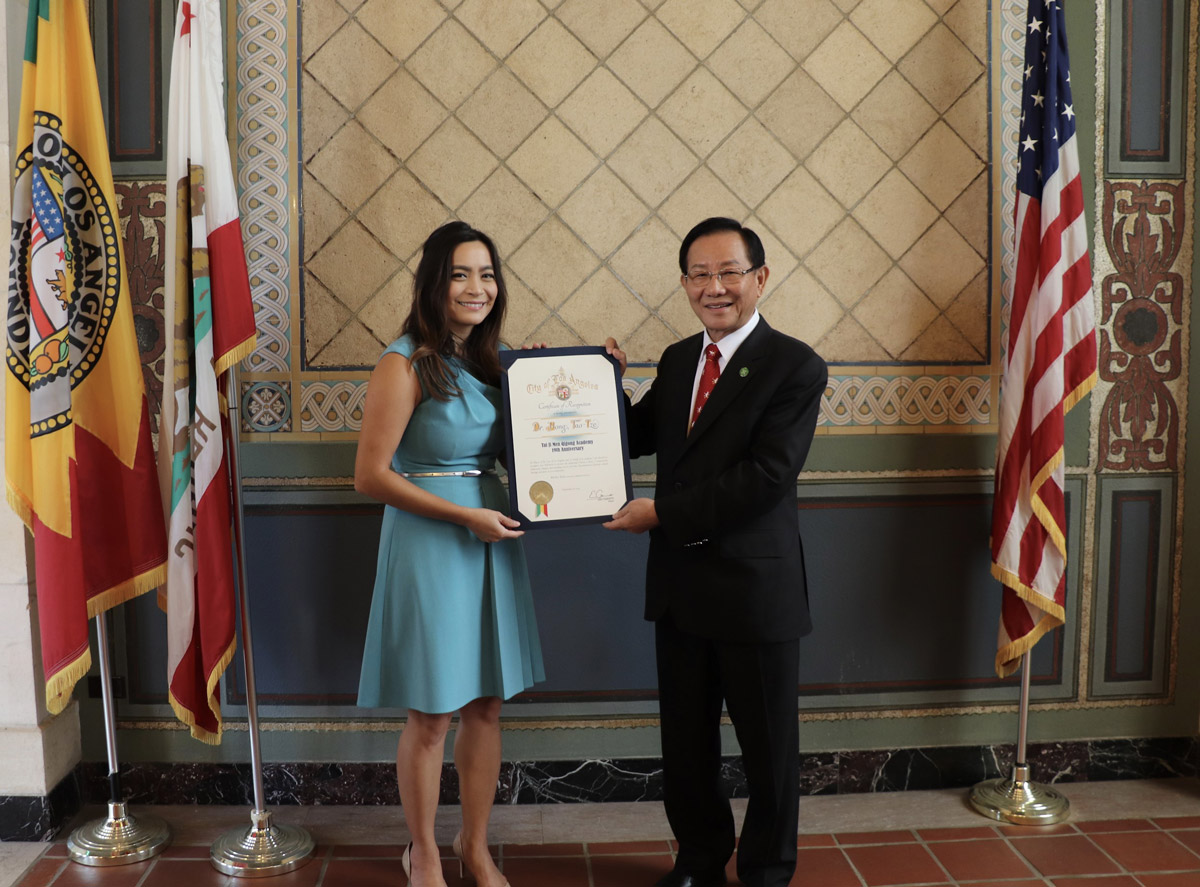 Dr. Hong, Tao-Tze, president of the Federation of World Peace and Love (FOWPAL) and Zhang-men-ren (grandmaster) of Tai Ji Men, was praised by Los Angeles Mayor Eric Garcetti on September 4, 2019 for his dedication to preserve traditional Chinese culture and promote peace. Mayor Garcetti states in the certificate of recognition for Dr. Hong, “I commend the enthusiasm, integrity and exemplary service you have demonstrated to promote cultural heritage and peace in our communities.” On behalf of the mayor, Jessica Caloza, a commissioner on Los Angeles City’s Board of Public Works, presented the certificate of recognition to Dr. Hong.

Under the leadership of Dr. Hong, FOWPAL members bring positive energy to their families, workplaces, communities, and the whole world. They have visited 100 nations, conducting cultural exchanges, promoting a culture of peace with love and conscience, and advocating the idea that the world is one big family and we are all brothers and sisters. 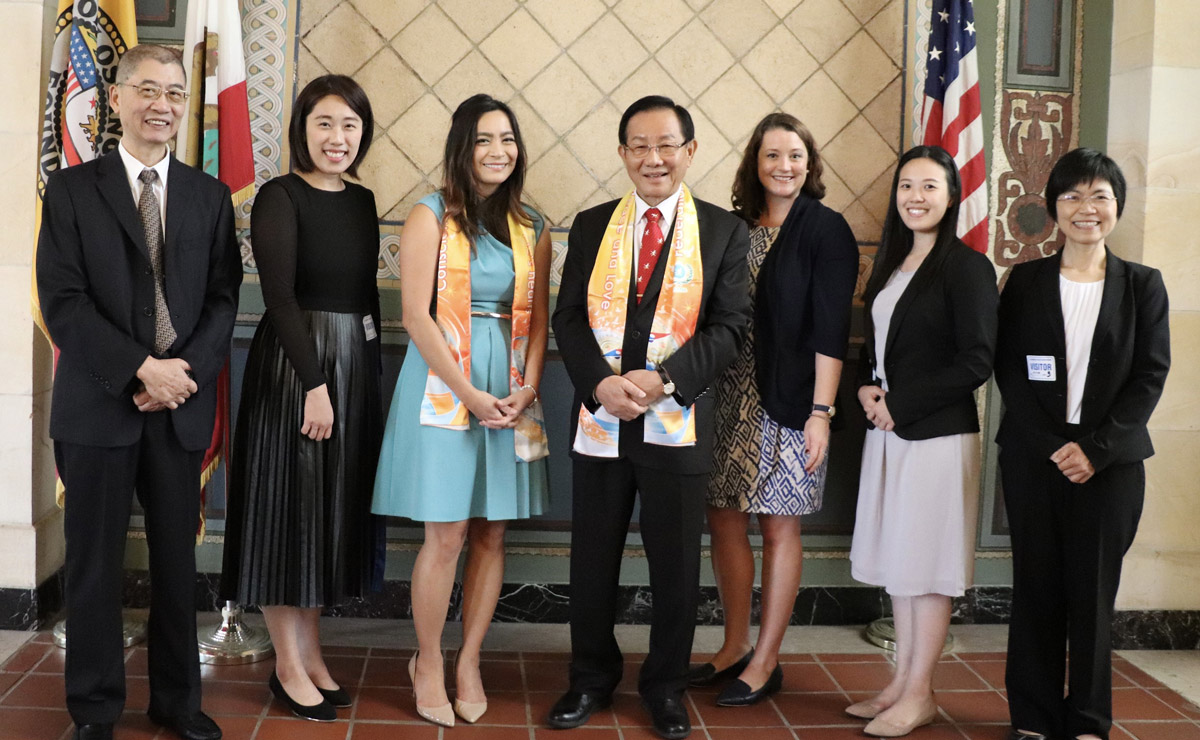 Over the years, Dr. Hong has traveled around the globe, striving to promote a culture of peace. In 2014, he initiated the movement of An Era of Conscience, which has been supported by people in 197 nations. Since 2018, Dr. Hong has worked with various Permanent Missions to the UN on a draft resolution, highlighting the importance of conscience.  They have co-organized conferences at the United Nations in New York and in Vienna to exchange views and consolidate ideas for world peace. Then the Kingdom of Bahrain submitted a draft resolution to the UN, and on July 25, 2019, the United Nations adopted the resolution and declared April 5 as the International Day of Conscience, allowing a culture of conscience to guide the world towards a secure, harmonious, peaceful and sustainable future through the influence of the United Nations. 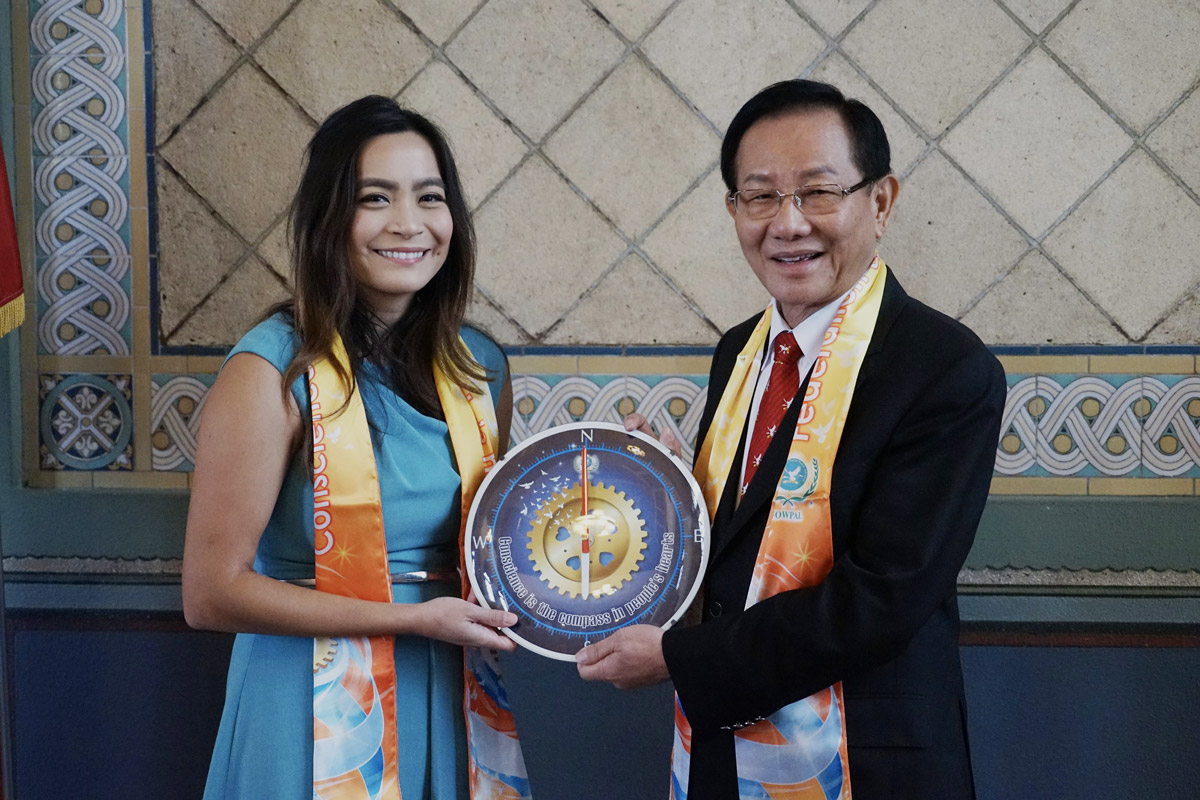 During the meeting, Dr. Hong shared the good news about the UN's designation of the International Day of Conscience with Commissioner Jessica Caloza and Erin Bromaghim, director of Olympic and Paralympic Development of Los Angeles City. They were very impressed with this achievement of Dr. Hong's and praised him for his peace efforts. They also endorsed the Declaration of International Day of Conscience in support of a culture of peace. To date, people in 163 nations have endorsed the Declaration.

On behalf of Mayor Garcetti, Commissioner Jessica Caloza was presented with a special clock by Dr. Hong. The face of the clock bears a compass of conscience, which symbolizes that all are encouraged to follow the guidance of their conscience at all times. Dr. Hong hopes that the City of Los Angeles will continue to encourage the preservation of cultural heritage and promote conscience education to set a great example for other cities around the globe.