An Evening of Love, Peace and Conscience
Celebrating the UN’s Designation of April 5 as the International Day of Conscience in Vienna 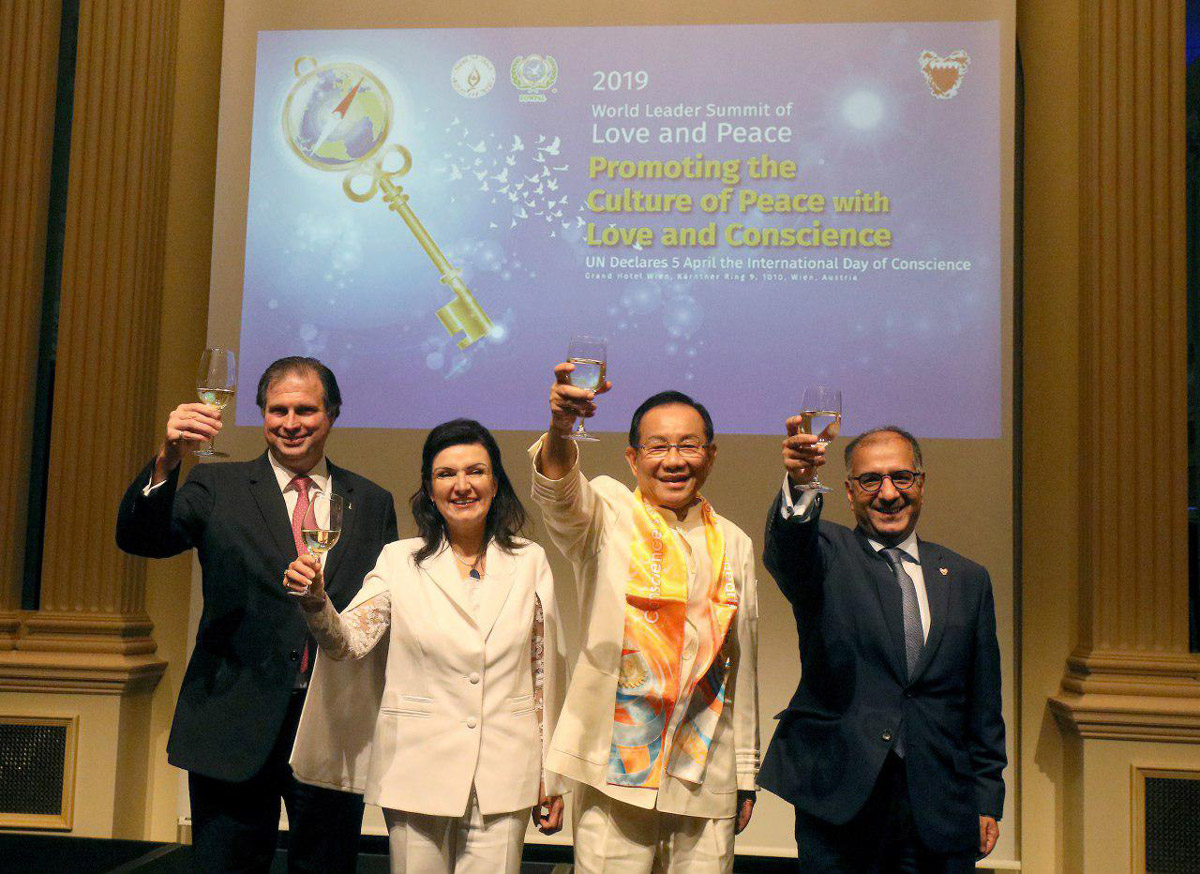 The Permanent Mission of Bahrain to the UN (Vienna), the Flame of Peace, and the Federation of World Peace and Love (FOWPAL) co-hosted a gala dinner in Vienna on October 10, 2019 to celebrate the United Nations’ adoption of April 5 as the International Day of Conscience.

FOWPAL received many congratulatory notes from world leaders, including UN Secretary-General; the presidents of Guyana, Portugal, Ireland, Malta, and Kazakhstan; a former president of South Africa; the King of the Netherlands; the Grand Duke of Luxembourg; the prime ministers of the Czech Republic, Slovenia, New Zealand, Trinidad and Tobago, Ireland, and the United Kingdom; the governor-generals of Australia, Canada, Grenada, Jamaica, and New Zealand; and the Prince of Wales. 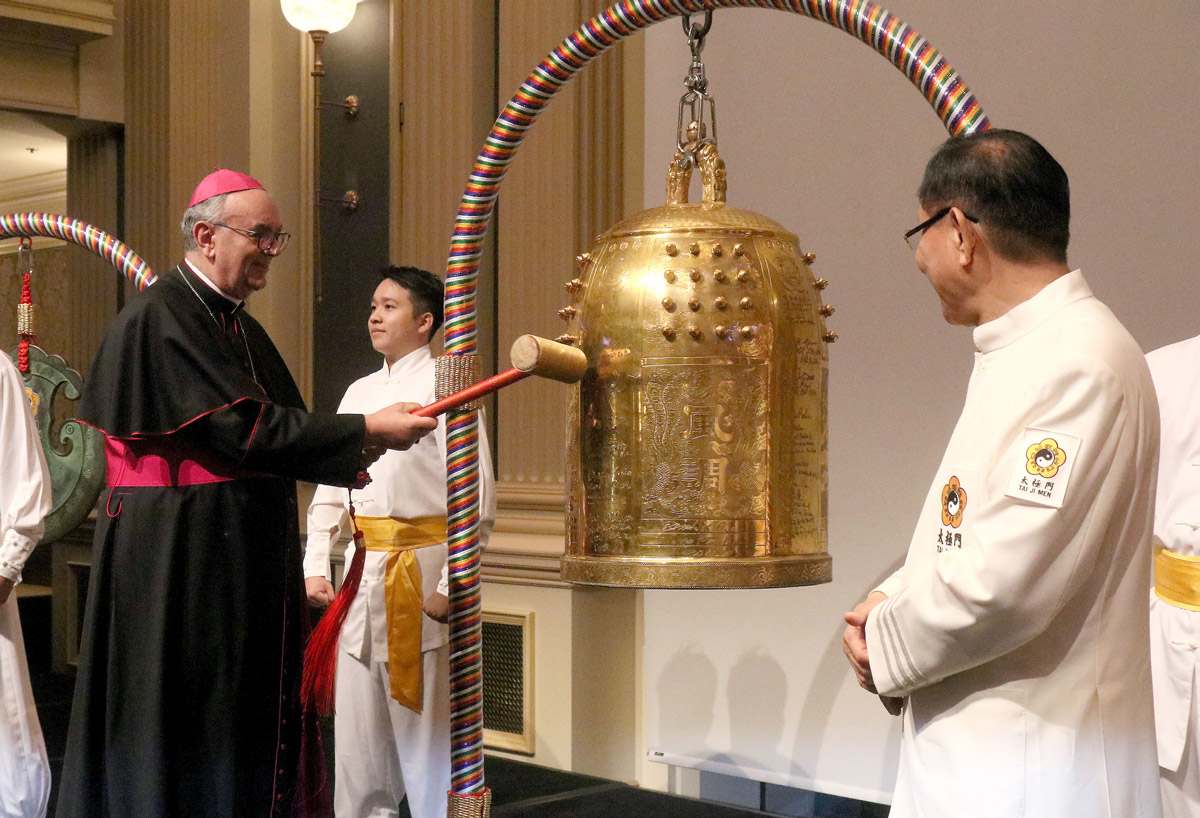 Dr. Hong, Tao-Tze, President of FOWPAL, welcomed peace promoters from 25 nations and emphasized that “the designation of April 5th the International Day of Conscience by the UN is a significant progress for peace in the history of mankind. This achievement was made possible through the relentless efforts of numerous heroes of conscience. The International Day of Conscience is meant to activate sincere and pure hearts, inspire good deeds and extend selfless collaboration to achieve peace and common prosperity. This is a truly inspiring moment and a hopeful start.”

H.E. Dr. Yusuf Abdulkarim Bucheeri, Permanent Representative of Bahrain to the UN (Vienna), welcomed the participants and expressed his joy of co-hosting the event with FOWPAL and the Flame of Peace. He stated, “Let me pay tribute to Dr. Hong, the president of FOWPAL, for his wise words regarding the launch of the International Day of Conscience. It is indeed a wake-up call to remind people of the world to listen to their conscience.”  Ambassador Bucheeri feels very delighted and satisfied with the UN’s adoption of Bahrain's resolution designating April 5 as the International Day of Conscience. He stressed that this shows that the cooperation between governments and international civil society organizations can achieve a lot. 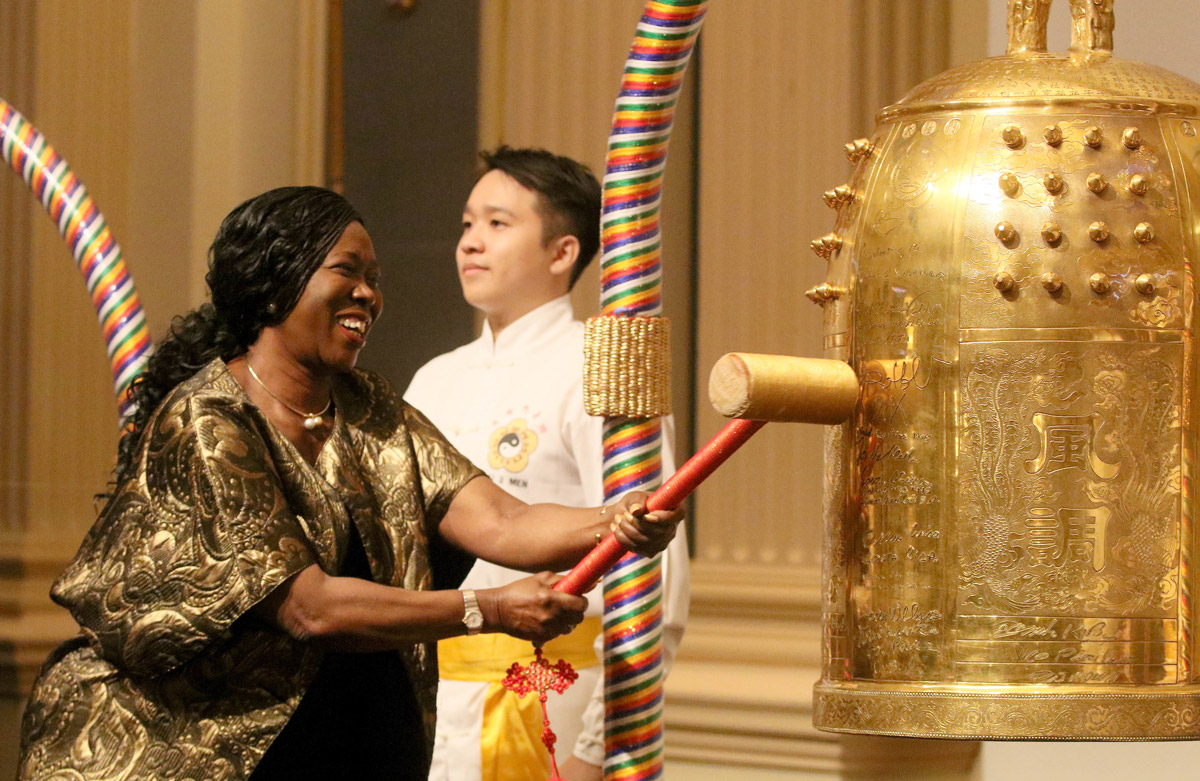 Vice President of the Flame of Peace, H.I.R.H. Sandor Habsburg-Lothringen said, “Promoting the culture of peace with love will only work if we have a conscience.” He continued by saying, “I really believe that the world is in for a very big change and that it is so important that there are leaders and organizations like Dr. Hong, Tao-Tze and FOWPAL who are working immensely to create a real awareness for peace in world leadership to focus on sustainable activities for a lasting peace.”

To awaken the conscience in people’s hearts, FOWPAL conducted a ceremony of ringing the Bell of World Peace and Love. Apostolic Vicar of Northern Arabia, His Lordship Bishop Camillo Ballin rang the Bell and stated, “Peace is possible with a rightly formed conscience and with a deep spirit of forgiveness. I wish everyone to be able to forgive all!” Ambassador of Liberia to Austria, H.E. Ms. Youngor Sevelee Telewoda also rang the Bell and stated, “How wonderful it will be for all of God’s people to live together in peace and harmony--from the Book of Psalms. Peace is intangible, invisible but indispensable to humankind.” 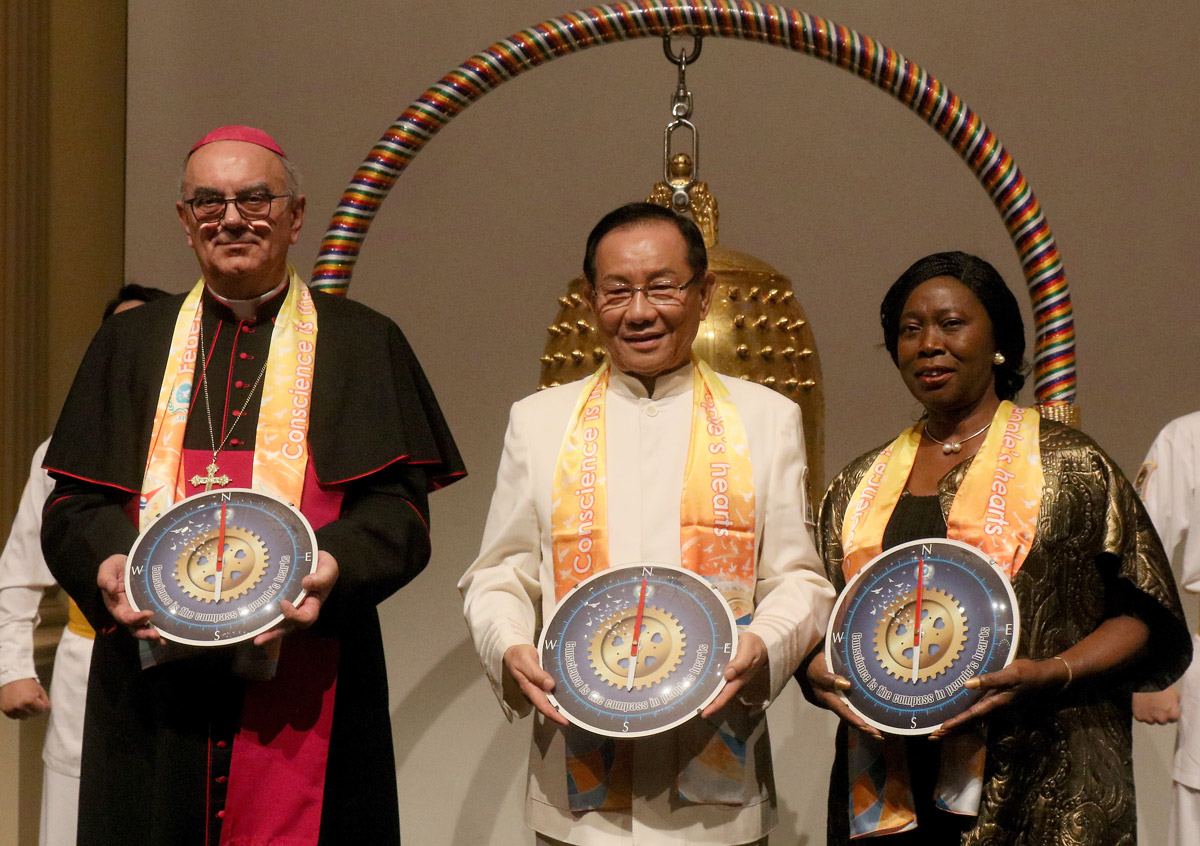 H.H. Prince Bernard Ndouga of Cameroon encouraged people to foster love and peace and said, “Let our hearts be filled with the feeling of peace. Without this, peace of the heart, we will never be able to bring harmony around us or in the world.” Dr. Werner Fasslabend, former Defense Minister of Austria and President of Austrian Institute for European and Security Policy, expressed his appreciation to the Kingdom of Bahrain for having started this initiative for the International Day of Conscience. “It is for the first time that it is not just an appeal to some leaders of nations, but an appeal to everybody, to go down to personal conscience,” said Dr. Fasslabend. President of the International Observatory of the Communes of Nations for Peace, Mr. Albert Konan Koffi mentioned, “The unity of the world is not a weapon, power, a human force, a country that shows its muscles. The unity of the world needs women and men, strong and courageous, like Dr. Hong, Tao-Tze.” H.E. Mr. Peter Schatzer, Permanent Observer of the Parliamentary Assembly of the Mediterranean to the UN (Vienna), stated, “The decisions about peace and war are still made by leaders whether elected or not. You can influence them with positive messages on peace and love.” “There are many ways to work towards peace, and I congratulate the organizers of today’s event, in particular, the Kingdom of Bahrain and Dr. Hong for their engagement,” added Ambassador Schatzer. Dr. Massimo Introvigne, Founder and Director of the Center for Studies on New Religions used an analogy that the world is on fire and said, “I believe tonight we see something extremely important. We saw the way out. We saw the way to salvation.” Dr. Introvigne added, “Let’s board the chariots Dr. Hong is offering to us. Let’s board the chariots and get saved.” 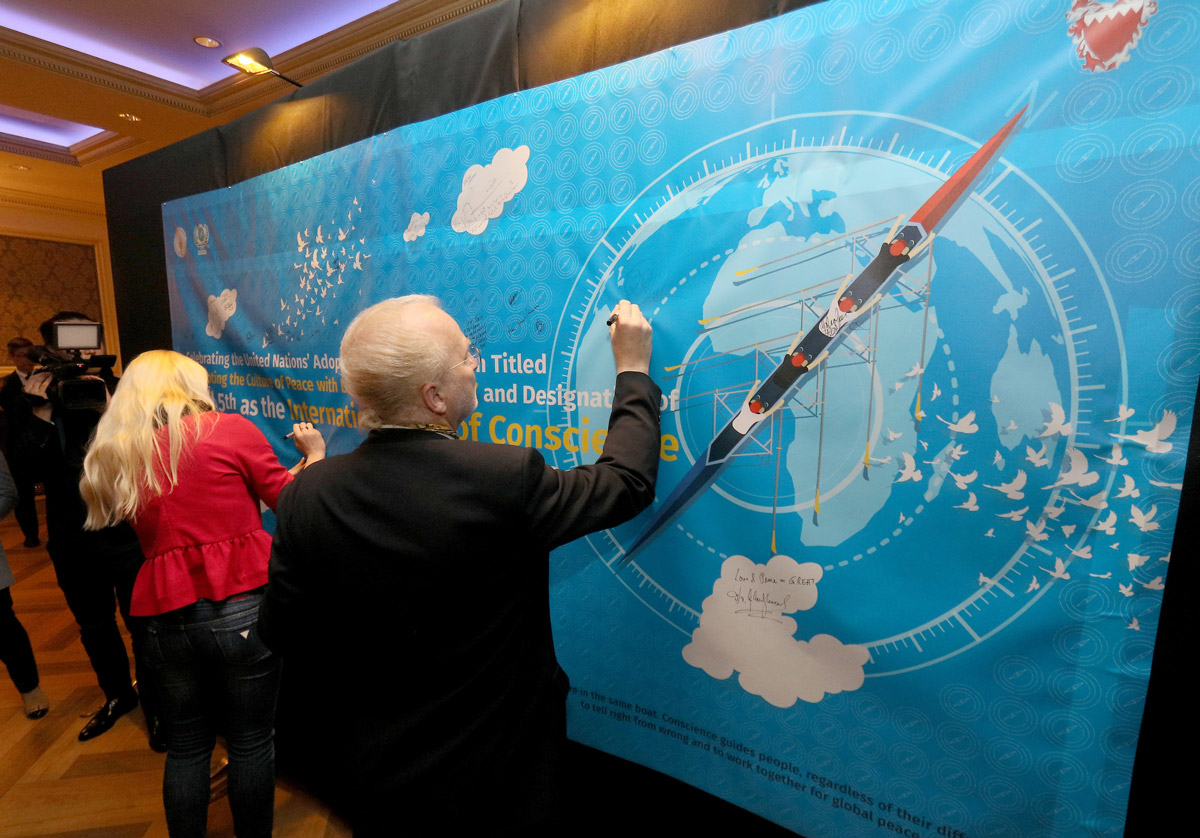 FOWPAL members sang a song called “The Song of Conscience” and enacted a play called “The Kingdom of Happiness” to encourage people to follow the guidance of their conscience to help themselves and the world. Dr. Hong, Tao-Tze presented “compass clocks of conscience” to many leaders. The clock represents time, direction, and goal. It symbolizes that conscience is the guide that leads us toward the right path of life and reminds us to seize every moment to practice kindness in order to create peace and happiness. 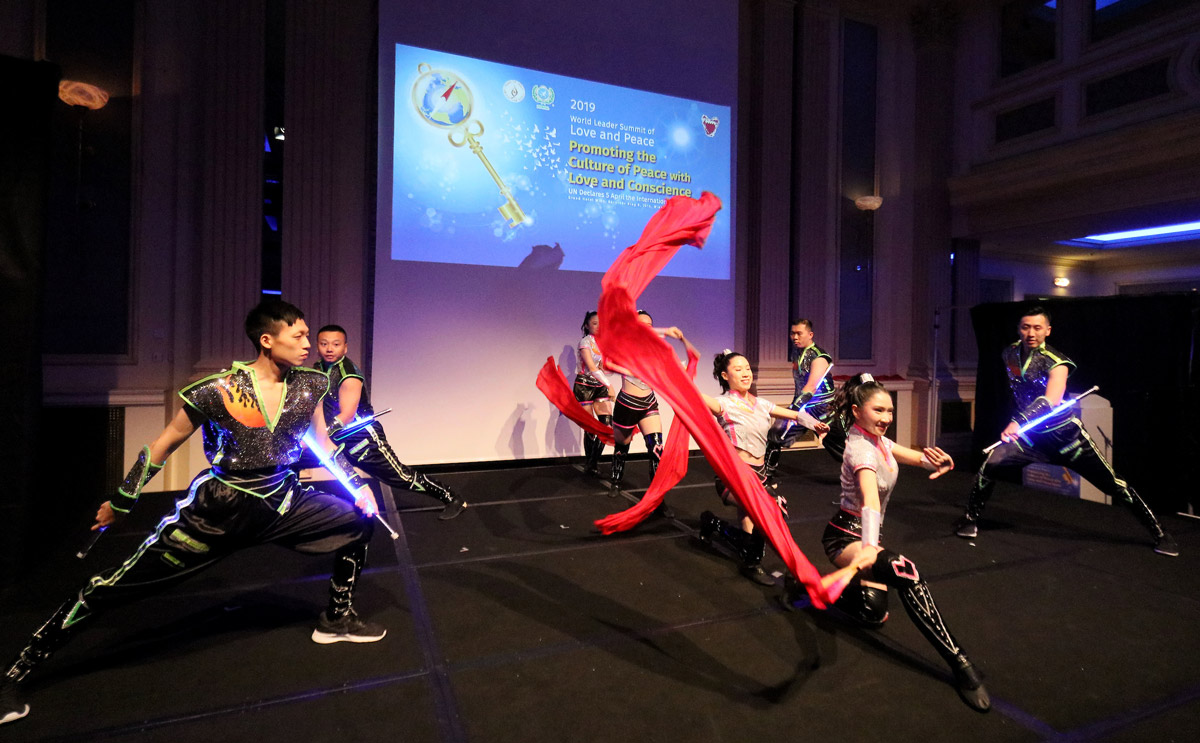 Dr. Hong presented another compass clock of conscience to H.E. Ms. Roxanna De los Santos de Piantini, Alternate Permanent Representative of the Dominican Republic to the UN (Vienna), and asked Her Excellency to give the clock to former Dominican Republic President Leonel Fernández on Dr. Hong’s behalf. This was to honor the former president’s contribution to peace as he defused a possible war among Columbia, Ecuador, and Venezuela in 2008, carrying out his wish for peace when ringing the Bell of World Peace and Love.

At the end of the event, when interviewed, H.E. Ms. Roxanna De los Santos de Piantini, Alternate Permanent Representative of the Dominican Republic to the UN (Vienna), said that “this is the second time I attend this activity. Last year I rang the Bell, and it was such a beautiful experience of love and peace. I want to be here every year, and share with those marvelous people all this beautiful thing about love, peace, conscience.” Eager to observe the International Day of Conscience, she continued to say, “I’m going to be here to celebrate it, not only myself, but also my family, my friends, all the world to celebrate this day because it’s such a beautiful day and very important!”