Global warming is threatening humanity's continued existence, and low-lying nations bear the brunt of climate change. At the invitation of H.E. Mr. Taneti Maamau, President of Kiribati, the Delegation of the Federation of World Peace and Love joined the 40th National Day celebration of Kiribati. On July 7, 2019, the FOWPAL delegation, led by FOWPAL's president Dr. Hong, Tao-Tze, embarked on a 19-day journey of peace to Oceania. FOWPAL visited the Marshall Islands, Kiribati, Solomon Islands, Nauru, Tuvalu, Vanuatu, and Fiji. The FOWPAL delegates also brought the Bell of World Peace and Love with them on the journey. FOWPAL held ceremonies of ringing the Bell of World Peace and Love to consolidate positive energy of visionaries to foster world peace. The peaceful sound of the Bell reverberated in Oceania. During the trip, FOWPAL visited the presidents of Kiribati and Vanuatu, conducted cultural exchanges, and encouraged people in these seven nations to endorse the Declaration of International Day of Conscience. FOWPAL urged them to promote a culture of peace with love and conscience, and to date people in 151 nations have endorsed the declaration.

The Bell of World Peace and Love Rings in Oceania 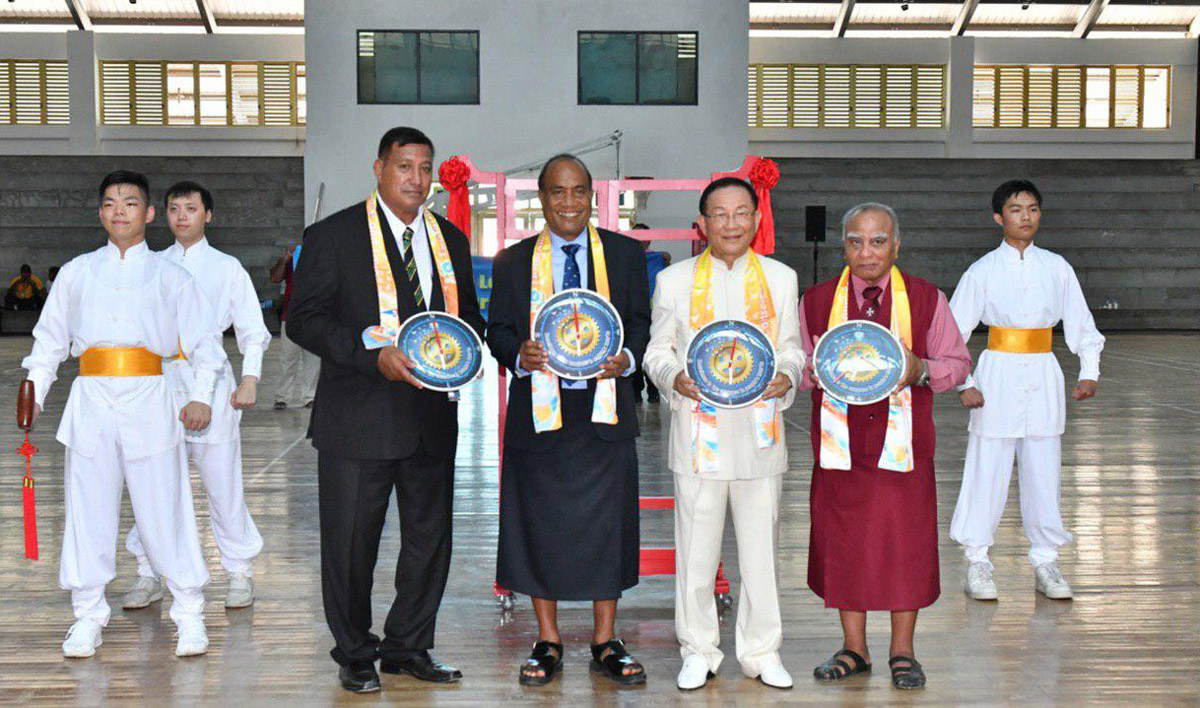 Kiribati is the only nation that is situated within all four hemispheres. It is one of the nations that see the first rays of the rising sun every day. The first bell-ringing ceremony took place on July 12 during the 40th anniversary celebration of Kiribati’s independence. Dr. Hong rang the Bell of World Peace and Love and made three wishes for the Pacific region and the world: First, may all conscience be awakened; second, may love and peace spread; third, may the world be as one.

President Maamau also rang the Bell and prayed for his country, his people, and the world. His Excellency said he knows very well that “ringing the Bell implies our belief that peace should prevail around the world not only for the present generation but for future generations as well.” President Maamau first rang the Bell in 2016 in New York, and he was very glad that he was able to ring the Bell again in Kiribati, allowing his people to hear the peaceful sound of the Bell.

FOWPAL is an international peace organization. It has been promoting the idea of love and peace through various means, such as holding summits, hosting ceremonies of ringing the Bell of World Peace and Love, and conducting cultural exchanges. During the 19-day journey, FOWPAL hosted four bell-ringing ceremonies, and five additional visionaries rang the Bell, including Sir Tom Marsters, Queen’s Representative to the Cook Islands; Hon. Tebuai Uaai, Speaker of the Parliament of Kiribati; Mr. Peter Jacob, Secretary to the Prime Minister of Nauru; Hon. Jean- Pierre Nirua, Minister of Education and Training of Vanuatu; and Ms. Rosy Sofia Akbar, Minister of Education, Heritage and Arts of Fiji. Ringing the Bell represents a bell-ringer’s wish to take actions for the bell-ringer, his/her nation, and the world. To date, 357 prominent leaders from 110 countries have rung the Bell of World Peace and Love, including 42 heads of state and government, seven Nobel Peace Prize laureates, UN ambassadors, and other visionary leaders from various circles. 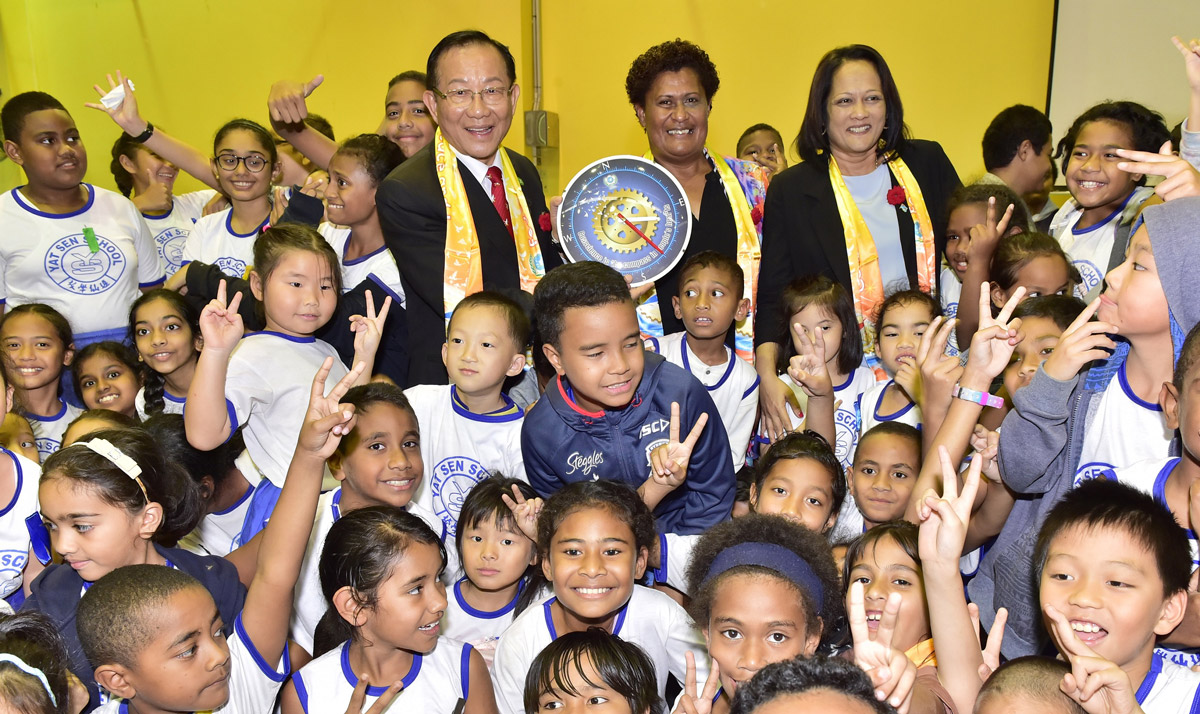 The island nations in the Pacific are like pearls floating on the ocean. Boasting abundant marine resources, they are like a paradise on Earth, and the people in these nations lead simple and happy lives. Their unique tribal cultures are worth our joint efforts to preserve them. Many island nations in the Pacific region are now facing severe challenges brought forth by global warming. FOWPAL delegates listened attentively when locals talked about their houses lost to the rising seas. FOWPAL delegates shared with them the endorsement campaign for the Declaration of International Day of Conscience. FOWPAL delegates sang peaceful songs to comfort people’s hearts when visiting sites of bloody battles during World War II.

It is stated in the Declaration of International Day of Conscience: “An excellent culture is the foundation of a quality education, which is essential for sustainable economic development. Countries are encouraged to promote a culture of conscience and incorporate the best aspects of other cultures and education systems to improve national economies.” Dr. Hong, Tao-Tze. President of FOWPAL, presented a special clock to Ms. Rosy Sofia Akbar, Minister of Education, Heritage and Arts of Fiji. The face of the clock bears a compass of conscience, symbolizing that all are encouraged to follow their conscience at all times to make the world a better place. Dr. Hong’s idea of love and peace resonated with Minister Akbar, who not only endorsed the Declaration of International Day of Conscience but also invited the FOWPAL delegation to conduct cultural exchange at a school called Yat Sen School, where the delegation shared messages of love and peace with approximately 600 elementary and middle schoolers. Minister Akbar and the principal of the school Mrs. Kami Kamica accompanied the FOWPAL delegation the whole time during FOWPAL’s visit. The students were very excited; they cheerfully sang their school anthem to welcome the FOWPAL delegation. Young FOWPAL delegates presented energetic singing and dancing, and many teachers and students happily join them. The FOWPAL delegates also shared with them the meaning behind the Declaration of International Day of Conscience. As the principal, Mrs. Kamica took the lead to endorse the declaration, and her colleges and students followed suit. 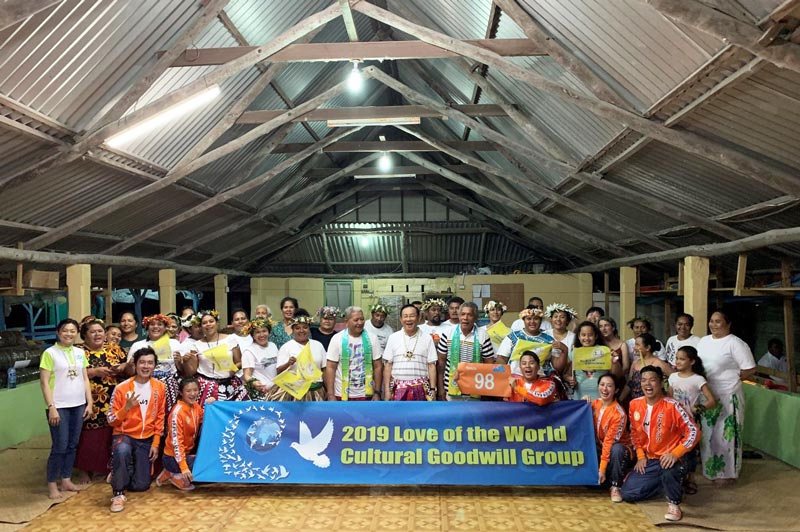 FOWPAL has visited 100 nations, promoting the idea of love and peace 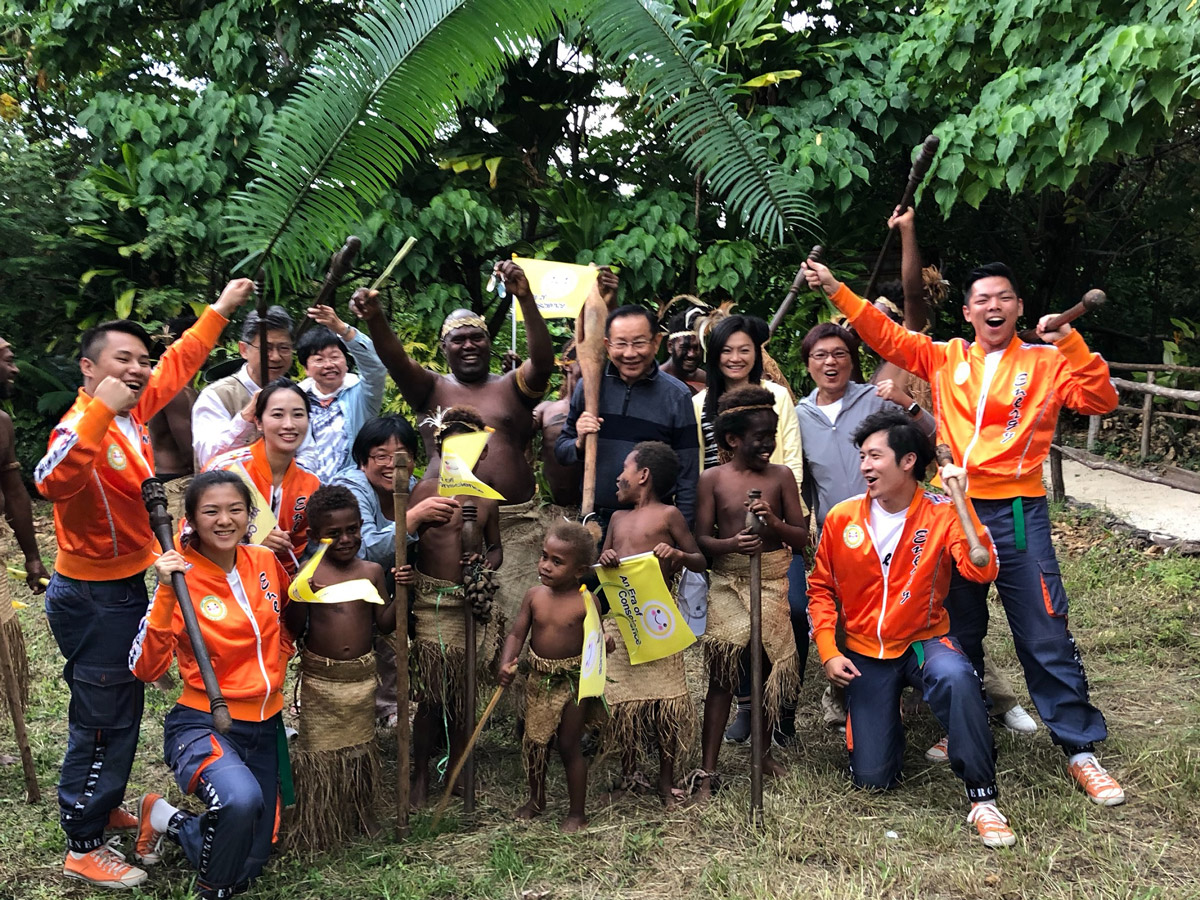 Motivated by love, FOWPAL has been conducting cultural exchanges to unite global citizens’ hearts. Over the past nearly two decades, FOWPAL volunteers have been promoting the idea of love and peace around the globe. On July 23, 2019, the FOWPAL delegation arrived in Fiji, the 100th nation that FOWPAL has visited for cultural exchanges of love and peace. During the 19-day journey, the FOWPAL delegation took a total of 21 flights to complete the trip of peace. The total flight time was 46 hours and the delegation has traveled 26,000 kilometers. The delegation visited many government officials in Oceania, including the presidents of Kiribati and Vanuatu; the prime minister and deputy prime minister of the Solomon Islands and Tuvalu respectively; ministers of the Marshall Islands, the Solomon Islands, Tuvalu, Vanuatu, and Fiji; an official of the Ministry of Foreign Affairs of Fiji; and the mayor of Majuro, capital of the Marshall Islands. Additionally, FOWPAL conducted cultural exchanges with a local school, a national dance group, and traditional tribes. FOWPAL delegates also interacted cheerfully with people they met and shared with them the idea of love and peace.

FOWPAL delegates sang songs, such as songs  titled “Love and Peace Song,” “We Are One World,” and “We Can Change the World,” to comfort people’s hearts and encourage one another. Their singing was inspirational and brought happy laughter wherever they went. Mr. Luni Tinilau, director of a dance group from the Nukulailai Island of Tuvalu, shared after the cultural exchange that he was very grateful for FOWPAL’s visit from thousands of miles away because he knew it was very hard to reach Tuvalu. Besides, FOWPAL was spreading the idea of love and peace. He agreed with FOWPAL’s idea and said that when his dancers and FOWPAL delegates danced together, he couldn't tell that they are from different cultures and nationalities. This embodied the notion that the world is a big family and we are all brothers and sisters.