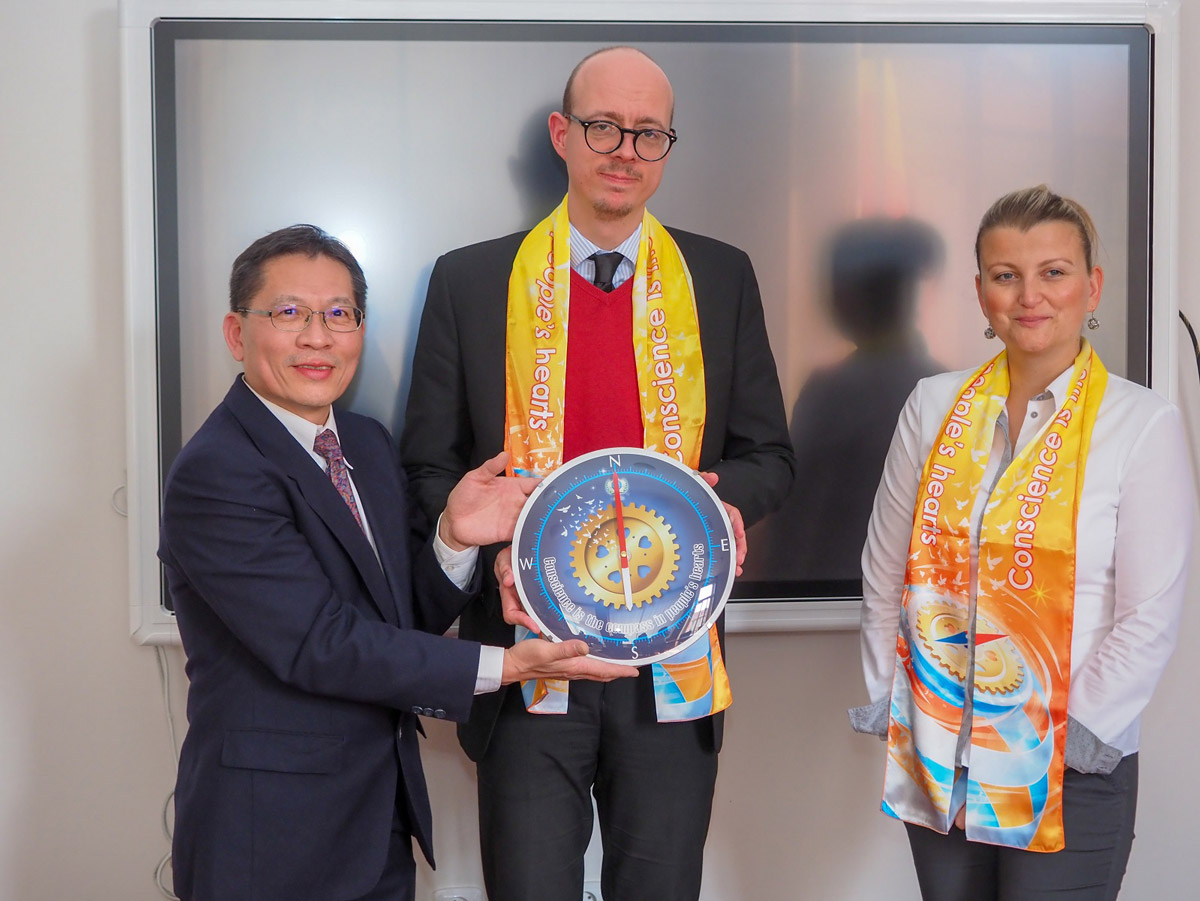 (By Ya Han Yang, Czech Republic) Twenty-five delegates of the Federation of World Peace and Love (FOWPAL) visited the Prague City Hall on April 2, 2019 to conduct cultural exchange and share the message of conscience, love, and peace. They were warmly received by Mr. Martin Churavy, Head of the International Relations and Protocol of the city. On Mayor Zdeněk Hřib’s behalf, Mr. Churavy was presented with a special clock, which is a compass of conscience, by the representative of Dr. Hong, Tao-Tze, President of FOWPAL. The clock, designed for the upcoming launch of the International Day of Conscience, symbolizes that people are encouraged to follow the guidance of their conscience at all times.

On February 5, 2019, FOWPAL initiated the global endorsement campaign for the Declaration of International Day of Conscience at the United Nations in New York and set April 5 as the International Day of Conscience. In less than two months, over 12,000 people in 105 nations have endorsed the declaration. It is stated in the declaration that “Conscience is the wellspring of love; it is essential to awaken world citizens' conscience to promote love, tolerance, acceptance, and care among people, thus enhancing friendships, family bonds, and international relationships, which facilitates a united world, where all people work together for the common good.” 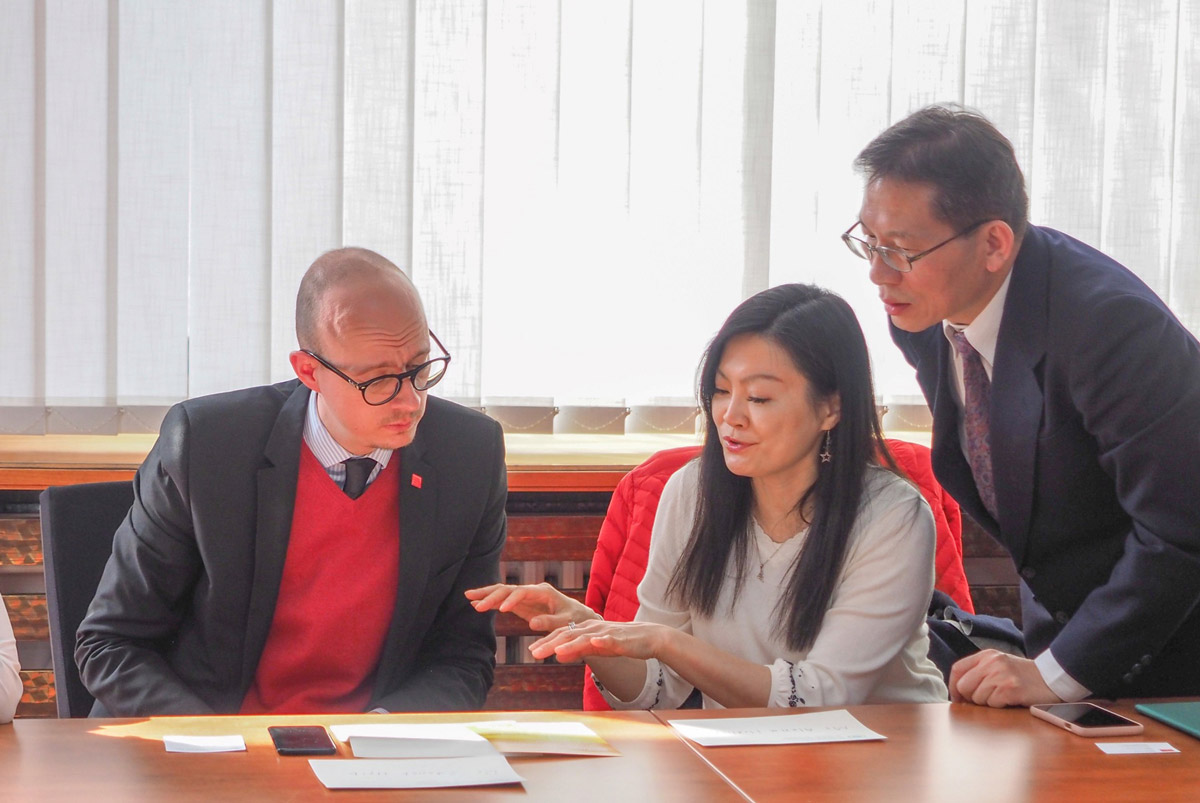 The FOWPAL delegates, most of whom are young volunteers, were invited to a conference room in the city hall. They shared with Mr. Churavy FOWPAL’s promotion of love and peace around the world over the past nearly two decades. On behalf of their president Dr. Hong, they extended his best wishes to the mayor and the citizens of Prague. They praised the mayor for placing great emphasis on education and shared information about the upcoming celebration of the first International Day of Conscience in Vienna as well as global citizens’ enthusiastic responses to the Declaration of International Day of Conscience. 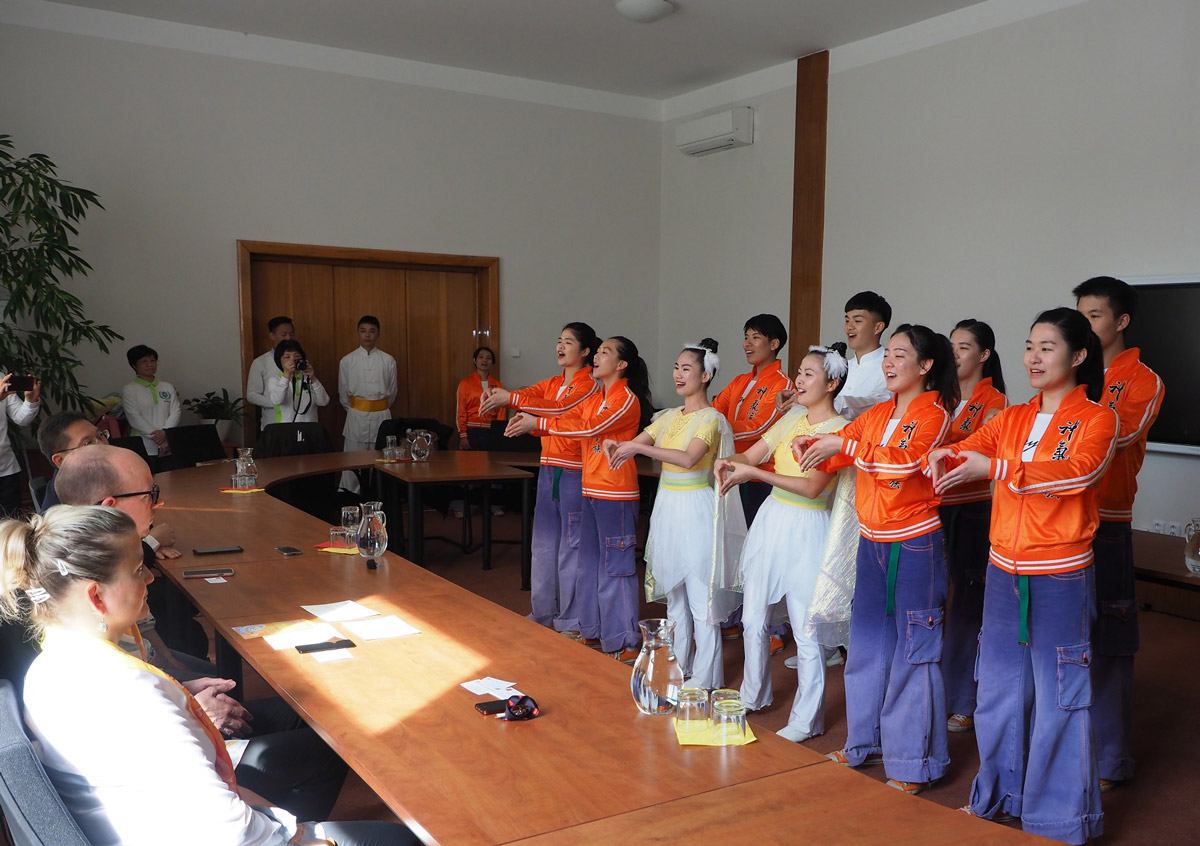 Young volunteers of FOWPAL shared their experiences of fostering love and peace. Over the past few days, through singing and dancing, the FOWPAL delegates have been promoting the endorsement campaign for the Declaration of International Day of Conscience in various places in the Czech Republic. Many people they met endorsed the declaration; some of them were moved to tears by the loving and peaceful energy radiated by the delegates while some of them gave the delegates big hugs.

Iris Chen, who just earned her master’s degree from a university in the United Kingdom, said,  “I think music is the fastest way to connect people, even beyond words.” She shared that while in Karlovy Varyne, the FOWPAL delegates were singing a song called “We Can Change the World” at a square. A lady from Germany, who stood there and listened to the delegation's singing, told the FOWPAL delegates that although she couldn't understand the lyrics, she was attracted by their smiles and the positive energy they displayed. Iris said, “We keep spreading the message of love and peace and hope that the Czech Republic and the world will become better.” 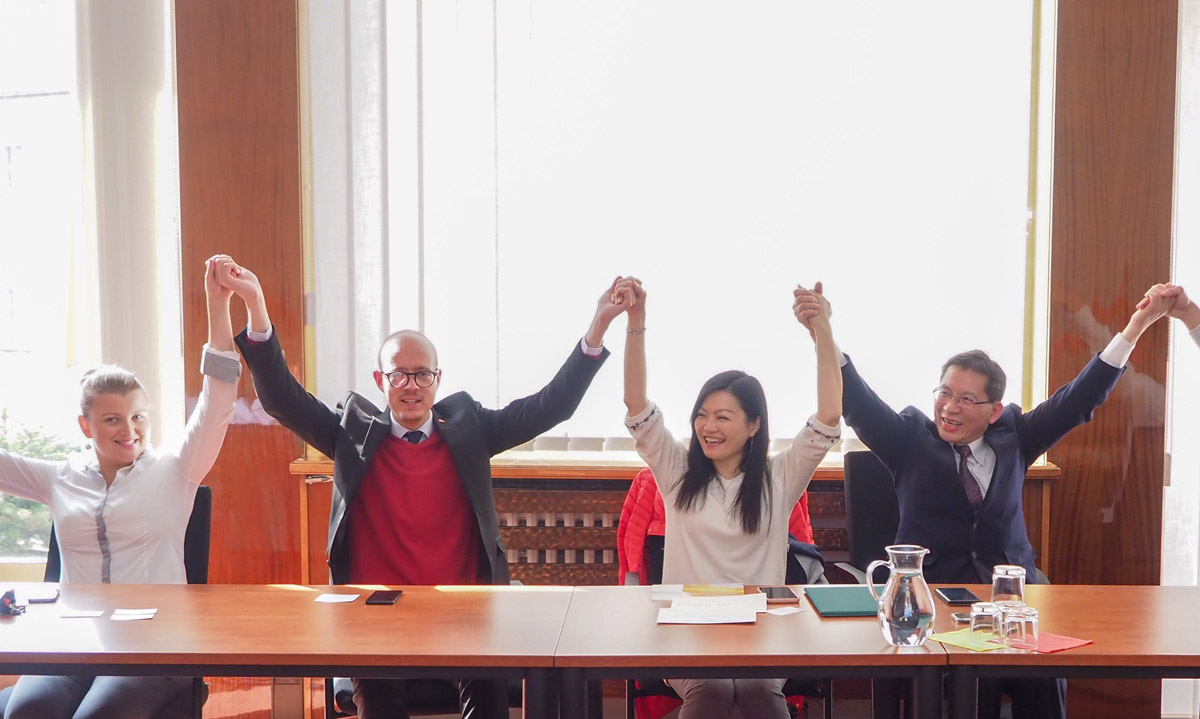 Chih-Han Chen, age 18, who is going to attend college this fall, shared that over his last winter break, he came across the president of an NGO working for child education in a very remote area of Africa during a conference in the United Nations in New York. At the time they had a chat about how education can impact the decisions people make after they grow up. Chih-Han said, “I believe that having the will to influence those around me is one of the most important skills of growing up. In the future I want to be a leader of those around me, and we will start our careers carrying the idea of conscience in whatever we do.” 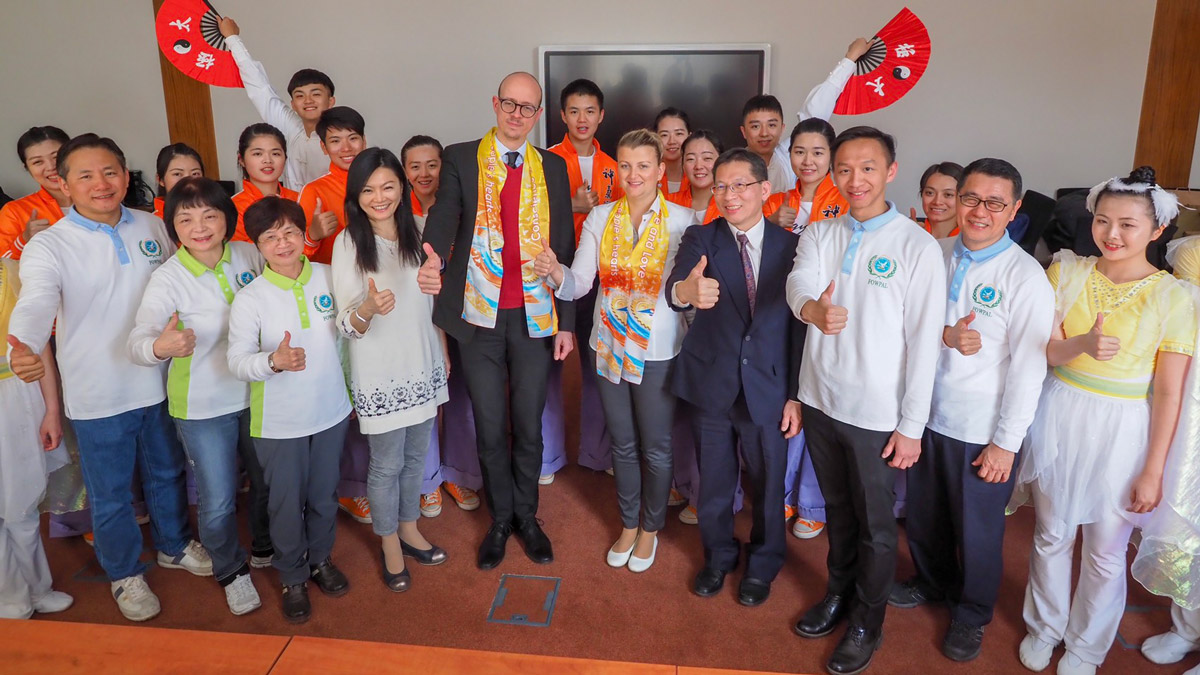 The young delegates’ sharing, which was full of passion and enthusiasm for the world, touched the listeners’ hearts. Mr. Churavy smiled as he and FOWPAL delegates held hands together and shouted in one voice, “Love and Peace.” Megan Hsu, a FOWPAL delegate, pointed out, “Through doing good deeds, these young volunteers of FOWPAL have become more confident, brave, and proactive. Under the guidance of Dr. Hong, Tao-Tze, they have learned to listen to their conscience to make the world a better place.” 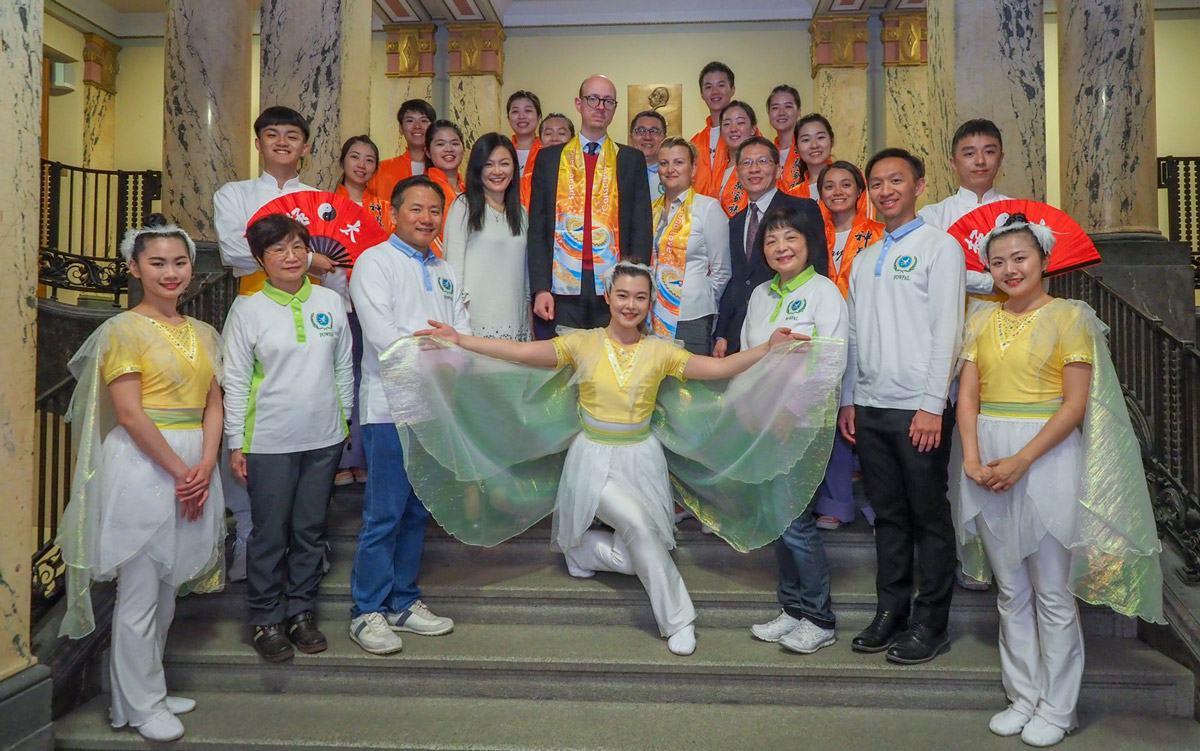 In response to the young volunteers’ sharing, Mr. Churavy stated, “I feel a bit humble because you spoke so wisely. Volunteering is a great way to learn new things, apart from things you can learn from teachers at school, your parents at home. And also it is a great chance to connect your own experience from school with the real world outside the classroom. And you spend your time to be the delegates. I can only say to you is congratulations!”

During their visit to the city hall, young FOWPAL delegates presented two songs titled “Love” and “The Angel in Your Heart,” filling the conference room with love and peace. Through the cultural exchange, FOWPAL has forged a precious friendship with Prague.