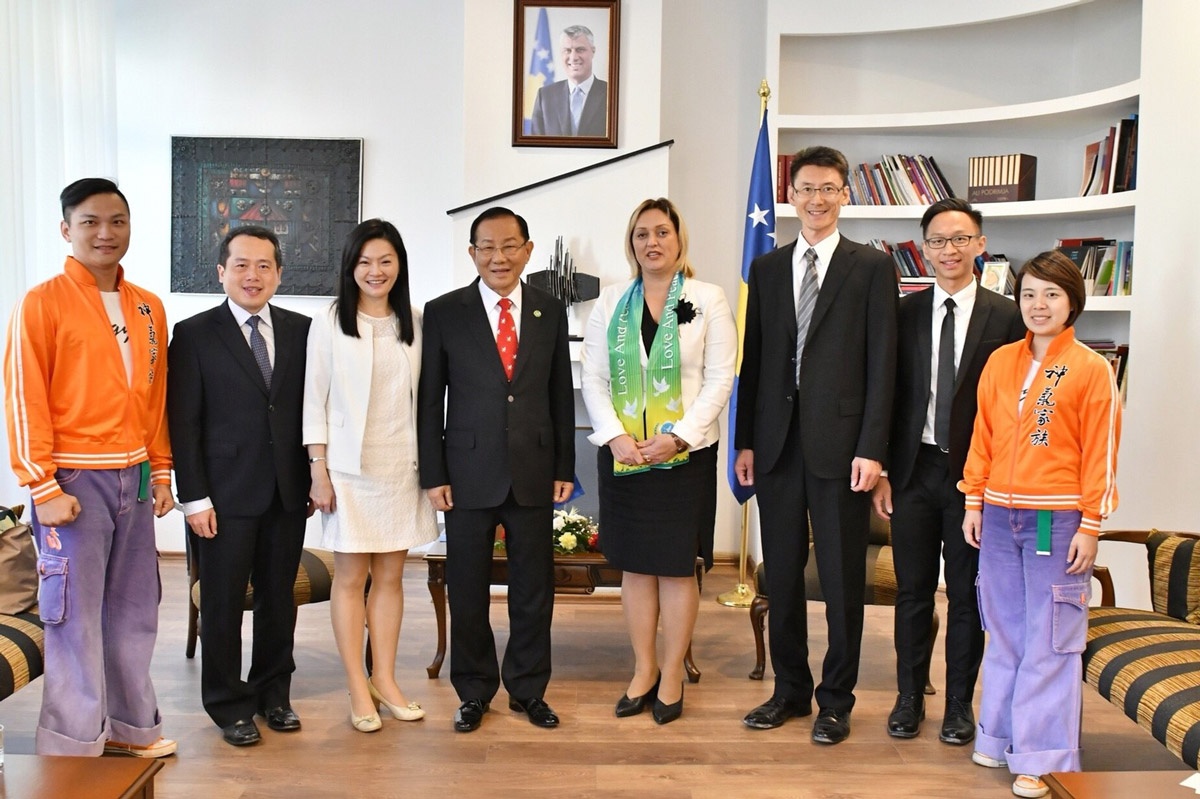 (By Chen-Hsin Liu in Kosovo)

What do the people in a war-torn and conflict-plagued nation need the most? What does it take to govern a country and make it prosperous? On October 16, 2018, the 10th anniversary of Kosovo’s independence, the Federation of World Peace and Love (FOWPAL), led by its President Dr. Hong, Tao-Tze, arrived in Kosovo, the 87th nation that it visited. Dr. Hong led FOWPAL delegates to visit the Ministry of Culture, Youth and Sport as well as the Assembly of Kosovo, sharing their experiences of promoting love and peace. Mrs. Leonora Morina-Bunjaku, Deputy Minister of Culture, Youth and Sport of Kosovo, stated that cultural exchanges of love and peace are very much needed in the land. Mr. Driton Lajci, Senior Advisor to the Assembly of Kosovo, pointed out that it will be necessary to have the Bell of World Peace and Love ring in Kosovo. 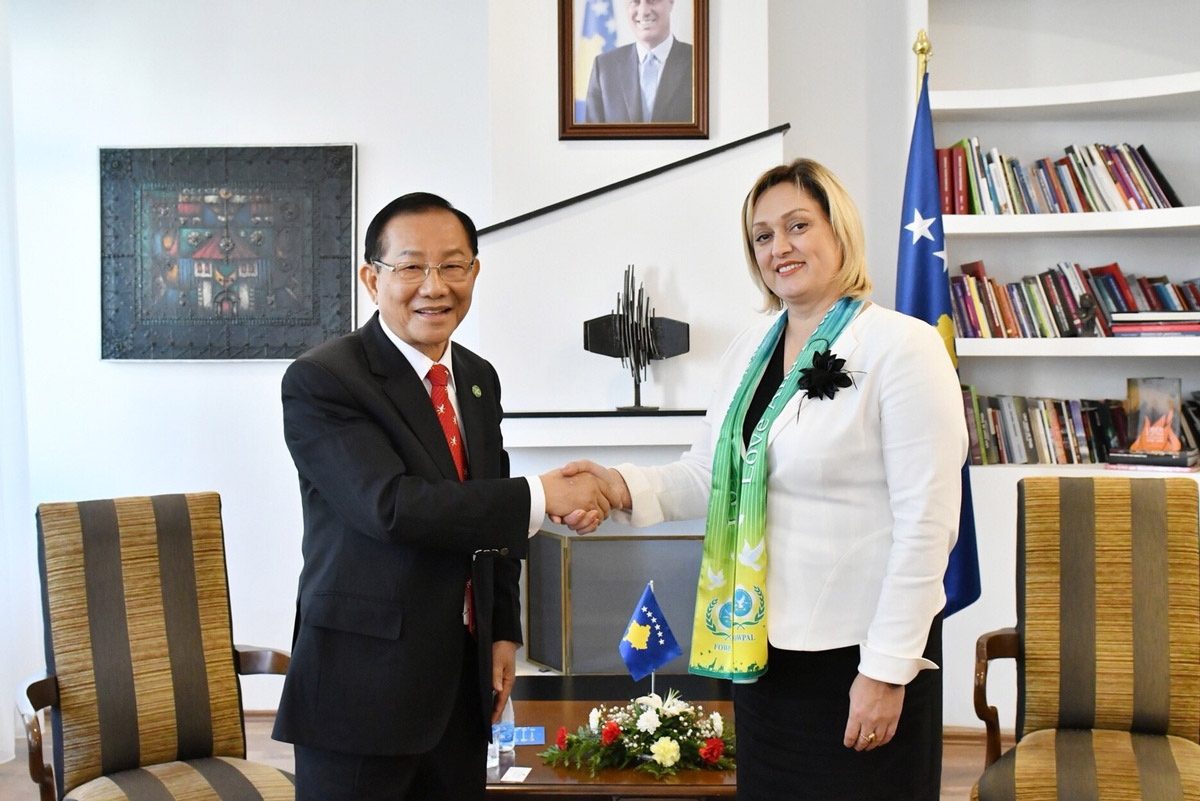 Dr. Hong led the FOWPAL delegates to visit the Ministry of Culture, Youth and Sport; Mrs. Leonora Morina-Bunjaku, Deputy Minister of the Department, on behalf of the Minister, H.E. Mr. Kujtim Gashi, received them and had a wonderful conversation with them. The FOWPAL delegates shared how FOWPAL promoted the culture of peace worldwide through cultural exchanges, including its recent World Leader Summits of Love and Peace and ceremonies of ringing the Bell of World Peace and Love at the United Nations headquarters in New York and in Vienna, which aimed to garner a consensus of love and peace from various nations. Dr. Hong stated that the purpose of cultural exchanges is to appreciate other nations’ cultures, learn from their strengths, and infuse those good elements into one’s own culture for the betterment of people’s lives. 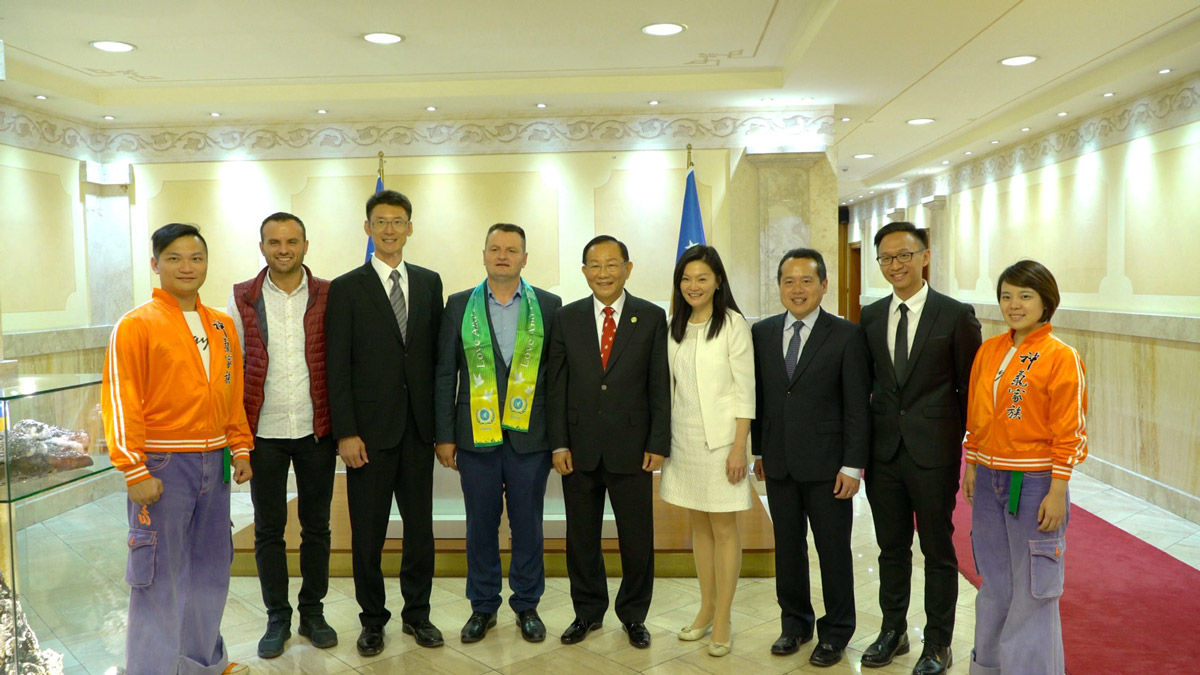 Mrs. Morina-Bunjaku agreed with what Dr. Hong shared and remarked that in order for people to enjoy better lives, it is important for the government to maintain good relations with its neighboring countries, in addition to enhancing racial harmony within the country. She commended FOWPAL for its contributions to the world and said that Kosovo is a young nation and welcomes cooperation and exchanges with FOWPAL. In response to her question about how her government can participate in and support FOWPAL’s peace endeavors, Dr. Hong replied that it only needs to do one thing--to make its people smile. Dr. Hong emphasized that although from birth to death humans face many problems and need to resolve them, if everyone stays cheerful, the world will be very different. Happiness is vital to a school, a community, and a nation because it enables people to get things done easily and quickly, added Dr. Hong.

Mrs. Morina-Bunjaku also shared her philosophy of life, quoting Mother Teresa’s powerful words: “We cannot all do great things, but we can do small things with great love.” Mrs. Morina-Bunjaku treated Dr. Hong and the FOWPAL delegates with great courtesy and asked a staff member to escort them to the Assembly of Kosovo. 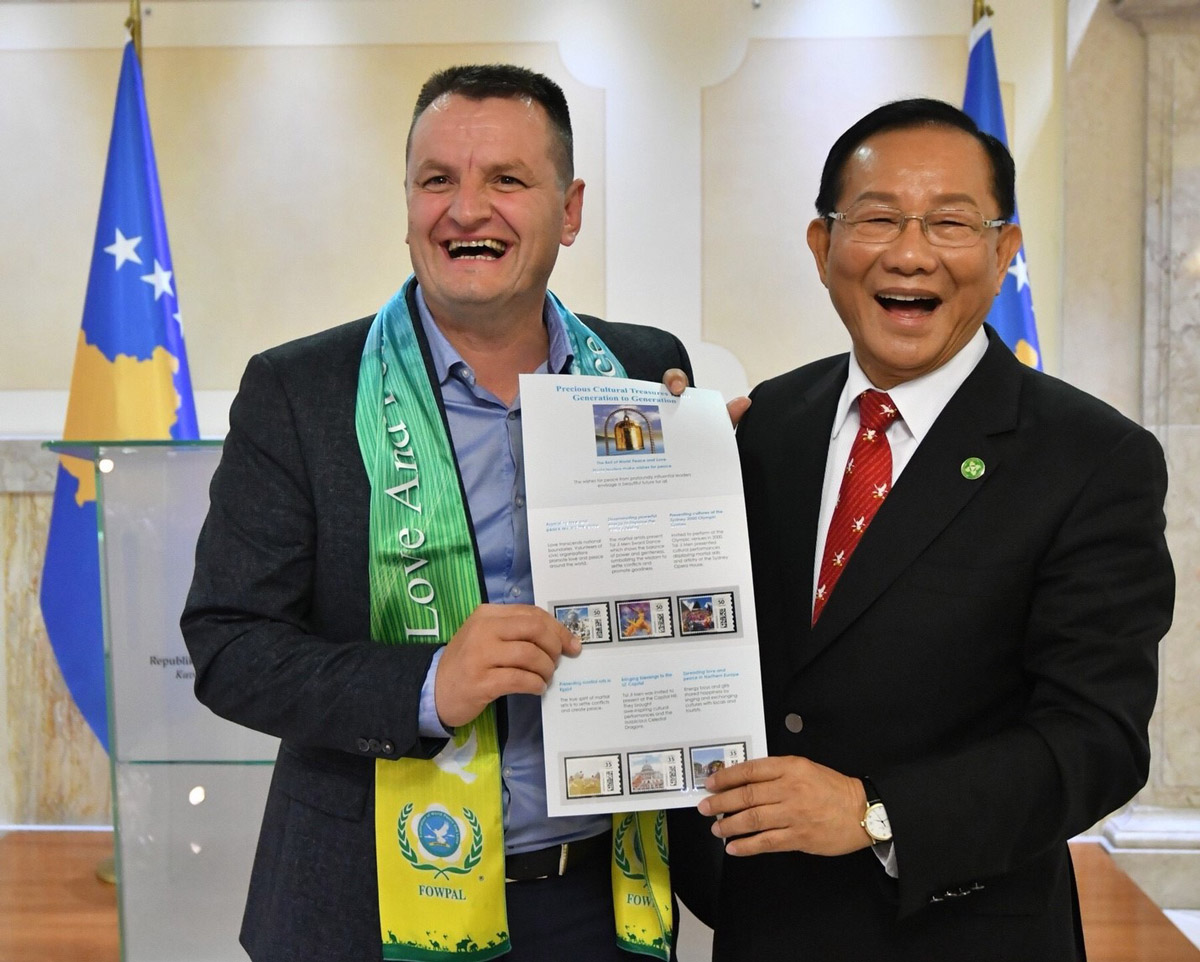 Political Advisor Mr. Driton Lajci, on behalf of the Chairman of the Assembly H.E. Mr. Kadri Veseli, received the FOWPAL delegation. After watching a video about FOWPAL, Mr. Lajci stated that it will be necessary to have the Bell of World Peace and Love ring in Kosovo; Dr. Hong extended his invitation to the President of Kosovo to ring the Bell in the future.

Mr. Lajci pointed out that Kosovo experienced five wars in the last century and that ethnic conflicts and wars have hampered the development of the young nation. It needs to promote peace, diversity, and multiculturalism so that people will respect and love one another, added Mr. Lajci. He stressed that peace and love are what Kosovo needs now. Dr. Hong shared that a nation can grow stronger and more prosperous through exchanging cultures with other nations and learn from one another because a good culture nurtures quality education, which leads to sound economy. Everyone aspires to peace, but there will be no peace without a healthy economy; therefore, culture is the most crucial foundation, said Dr. Hong.

Mr. Lajci praised FOWPAL and said that what FOWPAL has done is great and will be remembered forever. He felt that the FOWPAL delegates are full of positive energy and wear genuine smiles that come from their hearts. Kosovo needs the assistance of an organization like FOWPAL, he added.

Dr. Hong gave the Chairman of the Assembly H.E. Mr. Kadri Veseli the “Key to the Heart,” which was received by Mr. Lajci on the Chairman’s behalf. Dr. Hong shared the meaning of the key: Leaders can use the key to unlock the heart of everyone, improve the world, and bring love and peace to all. Shortly after the FOWPAL delegation left the Assembly, it received a thank-you letter from Mr. Lajci, who cordially invited FOWPAL to work together in the future.