Promoting the Idea of Conscience in Cappadocia

Dr. Hong, Tao-Tze, president of the Federation of World Peace and Love (FOWPAL), led delegates of FOWPAL to visit Cappadocia, a region in central Turkey, on October 17, 2019. With a beautiful volcanic landscape and a unique historical and cultural heritage, Cappadocia was inscribed on the UNESCO World Heritage List in 1985. Cappadocia covers several provinces, including Nevşehir. The FOWPAL delegation visited the City of Nevşehir, the capital of the Nevşehir Province, and was received by Deputy Mayor İbrahim Yüzel. During the meeting, the delegation shared with the deputy mayor important information about the International Day of Conscience. The FOWPAL delegates also visited well-known attractions, such as Kaymakli Underground City and the Göreme Open-Air Museum, and they interacted with locals and visitors from different countries through their music, dance, and bright smiles, hoping to spread positive energy and messages to all parts of the world. 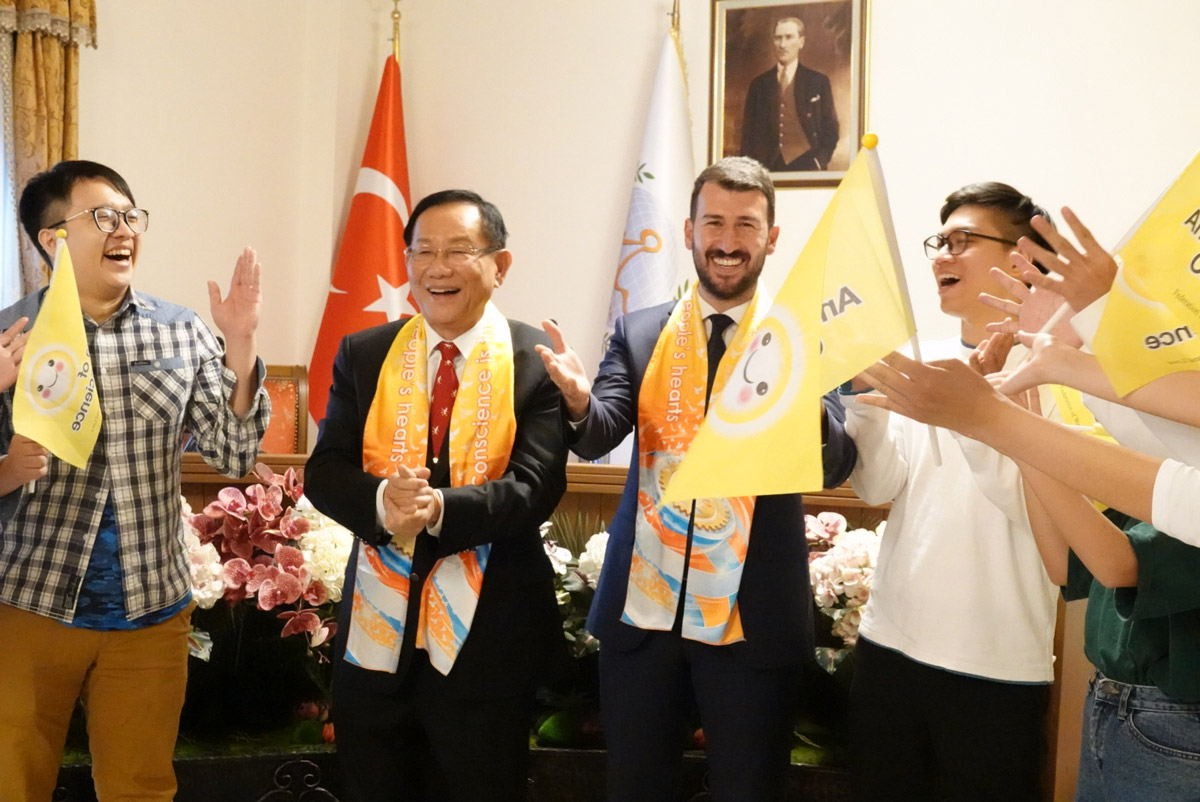 In his dialogue with Dr. Hong, Deputy Mayor Yüzel expressed his appreciation and admiration to FOWPAL for its noble ideas and objectives. He also emphasized that Nevşehir is a city of peace and the city’s monument of peace represents its residents’ aspiration for peace. Dr. Hong shared with him the United Nations’ designation of April 5 as the International Day of Conscience. It is hoped that through worldwide promotion of this UN day, people will foster a culture of peace with love and conscience. The deputy mayor remarked, “From now on, the International Day of Conscience is an important day for us all. As it is a day adopted by the United Nations, we will start preparing and considering how to connect our current works with the International Day of Conscience and to implement them together. We are really looking forward to sharing with you the achievements.” Dr. Hong presented Deputy Mayor Yüzel with a Compass Clock of Conscience, symbolizing that people shall follow the guidance of their conscience all the time. 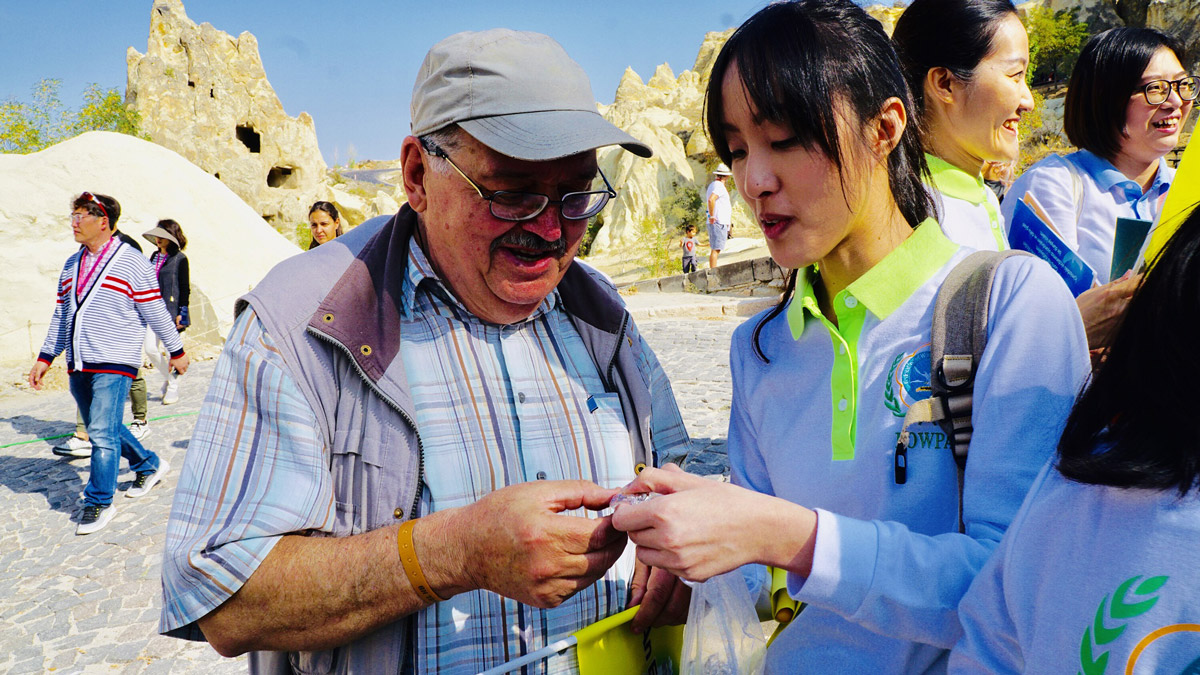 At the City Hall, young FOWPAL delegates performed the “Love and Peace Song," filling the meeting room with love, peace, and warmth. Dr. Hong invited the City of Nevşehir to celebrate the International Day of Conscience together. It is hoped that on April 5, 2020 the spirit of peace will be embodied, conflicts across the planet will cease, and people will jointly embrace conscience and love. Dr. Hong also pointed out that FOWPAL had visited 22 cities in a six- month period in order to spread positive messages and energy to more people. If all people, regardless of their gender and age, can exert their good influences, the collective energy will bring positive changes to the world. Deputy Mayor Yüzel said that he was moved by FOWPAL’s efforts to promote love and peace and expressed his aspiration for a world without war and conflicts. He said that peace is not just free of war and that the true meaning of peace is to create a happier living environment for people. He further added that the City of Nevşehir is working on gender equality, cultural education for children, and refugees’ adaptation to society, and it aims to create a happier and more prosperous environment for all. 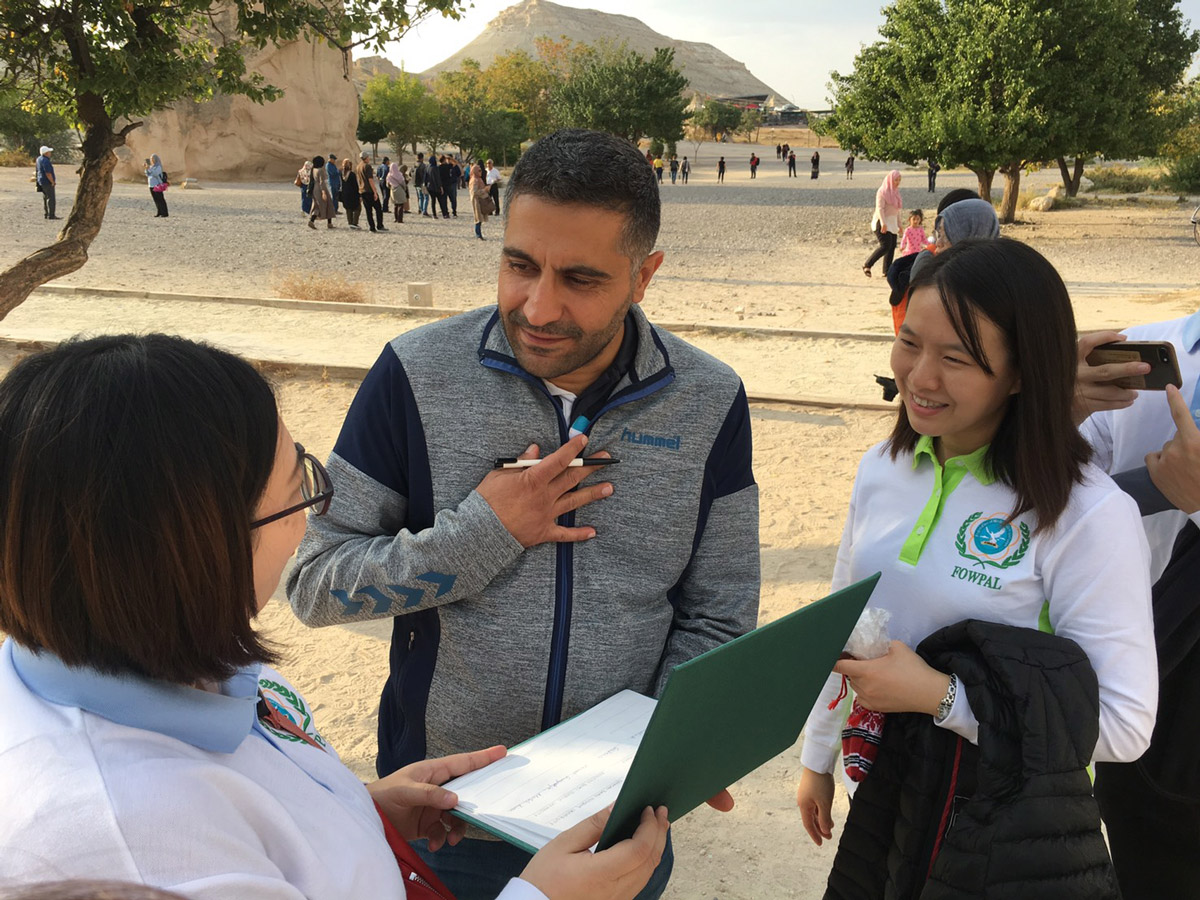 The delegates also visited many historic sites; they spread the energy of love and peace through singing everywhere they went. The Göreme Open-Air Museum contains over 30 cave churches, most of which were built in the 9th to 11th century and served as sanctuaries for Christians fleeing political persecution. Now the shelters have become well-known scenic spots attracting tourists from around the world. The FOWPAL delegates’ singing attracted many tourists, and the delegates shared with the tourists the endorsement campaign for the Declaration of International Day of Conscience and what conscience is to them. One FOWPAL delegate said, “Conscience is the positive voice in the heart. Staying happy, smiling to ourselves and others, and spreading the energy of love around us are all deeds of conscience.” Many tourists agreed with the idea of conscience and endorsed the declaration. Some tourists even indicated that they would hold the flag of FOWPAL throughout their entire journey in Turkey to spread positive messages. One of the tourists from Bulgaria said that the FOWPAL delegates’ singing reminded him of a similar song that he heard during an activity at his granddaughter’s school. He said that the delegates’ singing made him feel warm and the lyrics resonated with him as the song depicts joy and love. After endorsing the declaration, he said he would share the message about conscience, love, and peace with his two granddaughters, too.

At the Mushroom Valley, the delegates took photos with friendly teachers and students of Tuzapakpen Meslek Teknike High School. One of the teachers, Mr. Merve Zengiz, signed the declaration and called her students to pose for group photos with the hand gesture of love. Another teacher, Mr. Sabon Ulusoy, talked with the FOWPAL delegates after group photos were taken. He mentioned that the founder of the Republic of Turkey, Mustafa Kemal Atatürk, once said, "Yurtta sulh, cihanda sulh" (Peace at Home, Peace in the World), which left a profound influence on the people of Turkey. Mr. Ulusoy also pointed out that in the Battle of Gallipoli, the Turkish soldiers were called “gentlemen” as they would save their enemies abandoned by the enemies’ comrades. He also said that Turkey would never start a war except for protecting themselves. Mr. Ulusoy not only endorsed the declaration but also invited his friends to do so as well, and he said that he hopes to have more interactions with FOWPAL in the future.