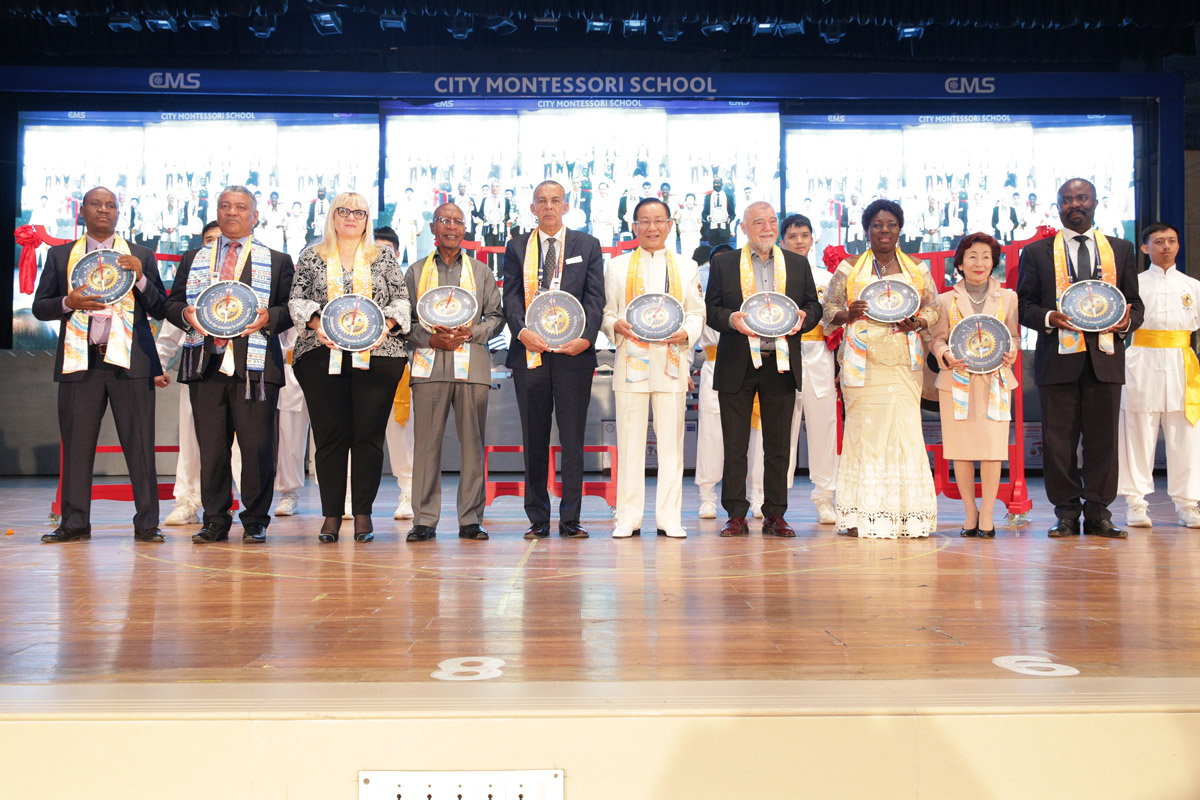 During the 20th International Conference of Chief Justices of the World, a series of meetings kicked off in Lucknow, India on Nov. 8, 2019.  Under the theme of “Uniting the World for Children Through Enforceable World Law and Effective Global Governance,” the Conference was attended by 297 honored guests from 74 nations, including heads of state, chief justices, judges, and leaders in various fields. Dr. Hong, Tao-Tze, president of the Federation of World Peace and Love (FOWPAL) led the FOWPAL delegation to attend the event for the tenth time this year.

During the Conference, FOWPAL hosted the World Leader Summit of Love and Peace and shared with other attendees that the United Nations General Assembly declared April 5 the International Day of Conscience during its 73rd session, which marks a significant milestone in human history. FOWPAL invites all nations to jointly promote this UN day and hopes that global citizens will work together to create a culture of peace with love and conscience. 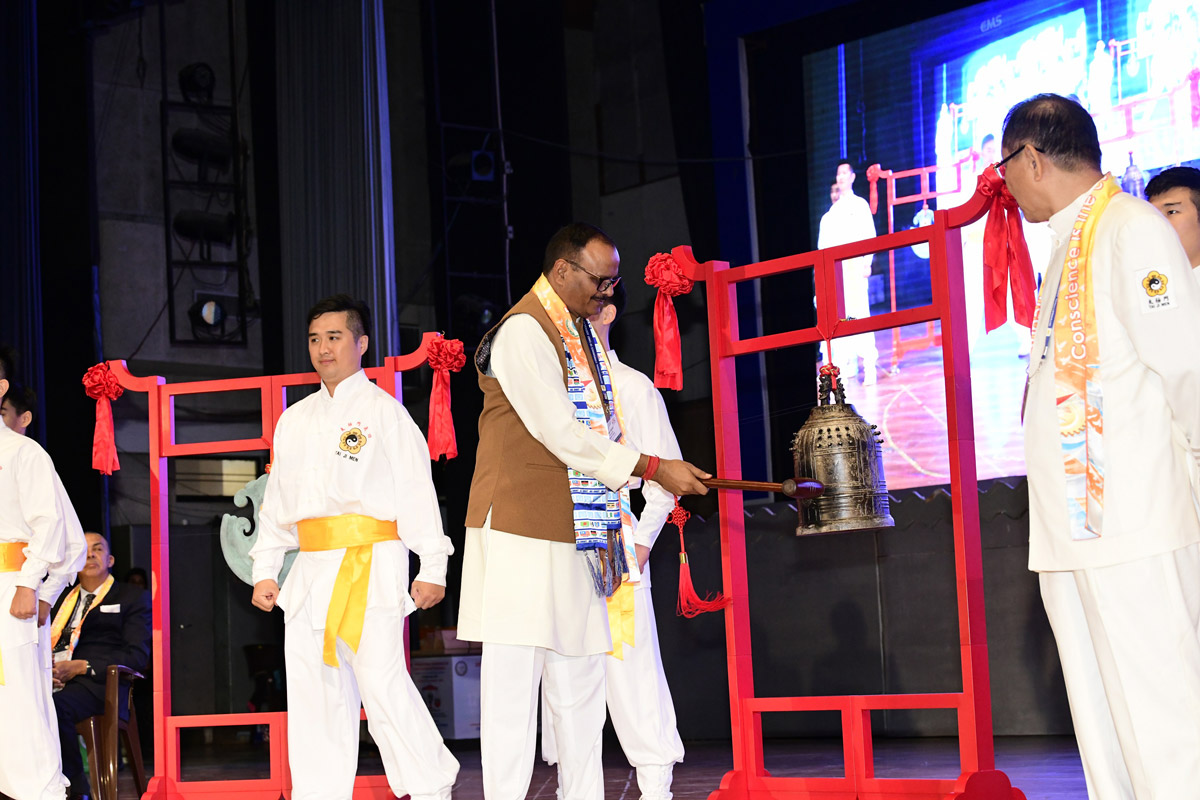 On Nov. 10, the City Montessori School, the organizer of the Conference, held the inaugural session of the Conference in its auditorium, which was attended by many honorable guests, including chief justices and judges. Hon. Deputy Chief Minister of India’s Uttar Pradesh Dinesh Sharma delivered a speech. Dr. Hong, Tao-Tze, president of FOWPAL, also gave a speech, emphasizing, “The core value of education is to inspire everyone's inherent kindness and self-awakening. Motivated by love, we shall avoid rigidity in our thinking and behavior, and we shall foster mutual understanding and caring. We shall come to the realization that we are all interconnected and interdependent so that we are willing to do altruistic things to realize a peaceful and sustainable future for the Earth and humanity and make the world a better place.”

He also pointed out, “Adhering to the rule of law is to protect human rights, which are universal values. Law is the last line of defense for human rights, and it is the embodiment of human ethics and conscience. Through the agreed upon rules and regulations, we uphold social order, fairness, justice and equality.” “Conscience is the soul of the rule of law and education. Like a compass, it guides us toward the right path and leads us toward harmony and truth. It constantly reminds us to return to our hearts, do good deeds, and make wise decisions. Conscience also empowers us to tolerate, forgive, thank and care for one another, and thus it bridges the distance between people and between nations. When people follow their conscience, they will take actions to love not just themselves but others for mutual benefits,” added Dr. Hong. 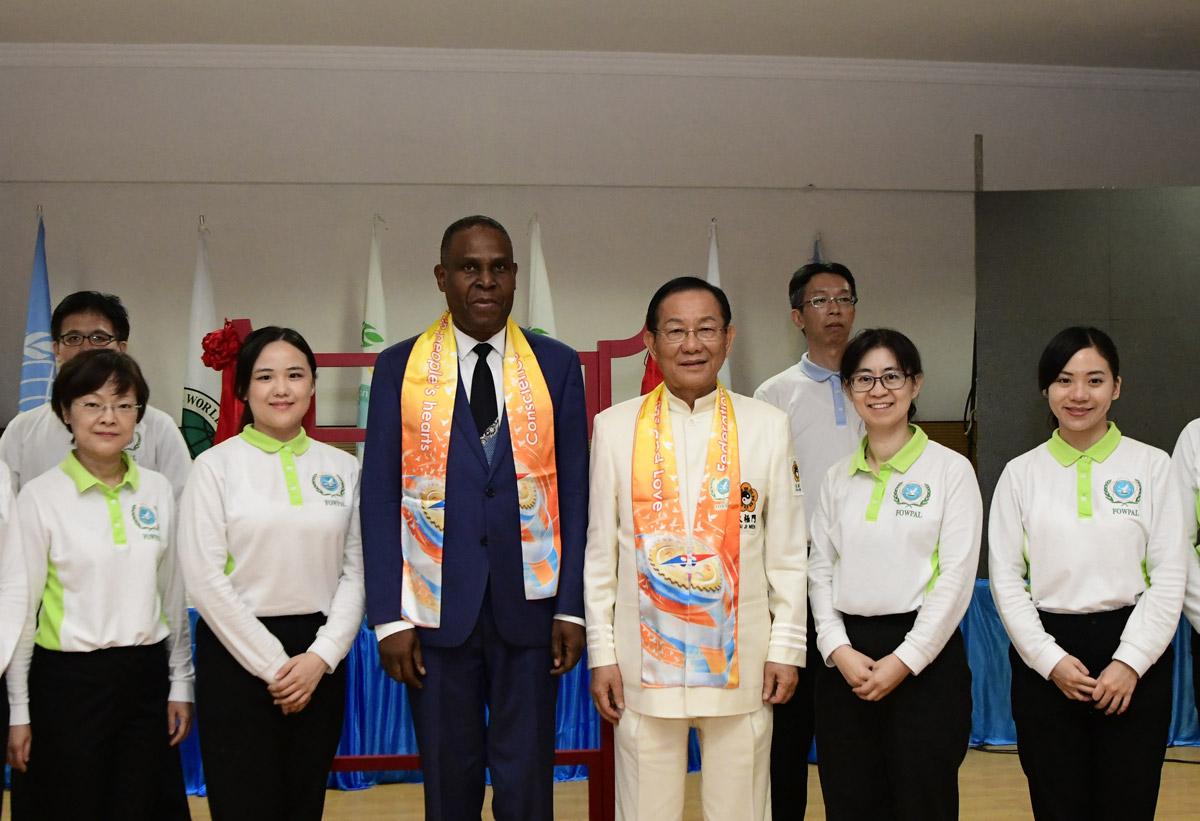 The bell-ringers shared their wishes for peace. Hon. Justice Minister of North Macedonia Renata Deskoska stated, “I wish all people follow their conscience and spread love and care for the humanity. That will bring peace and happiness in the world.” Hon. Mr. Khamis Juma Mwalim, Minister of Justice and Constitutional Affairs of Zanzibar, Tanzania, stressed, “Protect the children’s rights wherever you are, the children will protect you and your nation in the near future.” Hon. Deputy Chief Justice of the Egyptian Supreme Constitutional Court Adel Omar Sherif stated, “May peace prevail on earth, for us and for future generation.” Hon. Ms. Selima Ahmad, Member of Parliament of Bangladesh, remarked, “I wish we all are treated equally irrespective of gender, race or religion. I want to see this world love and peace for everyone. No war, no violence, no harassment to women.” Mrs. Masami Saionji, Chairperson of the World Peace Prayer Society in Japan, pointed out, “We are one in peace. May peace prevail on earth. We all have divine spark within us.” 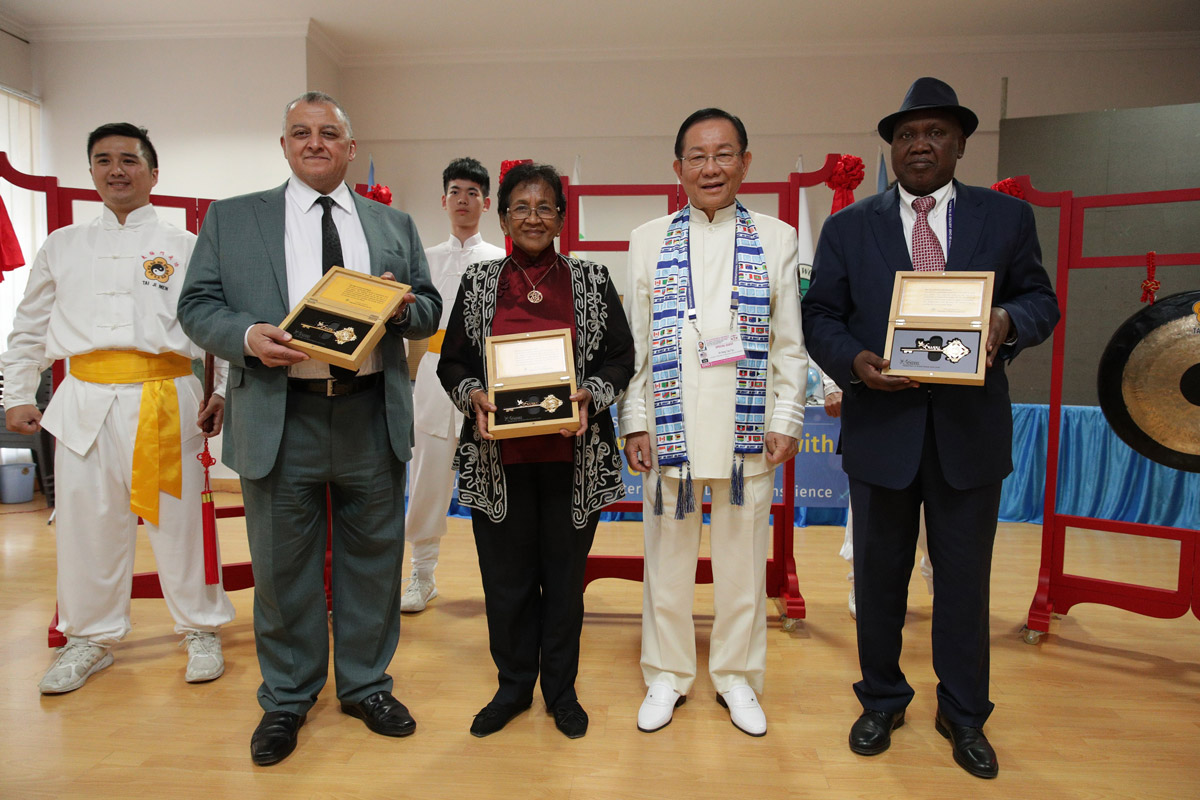 FOWPAL delegates shared the global endorsement campaign for the “Declaration of International Day of Conscience” with other participants, who responded warmly to the initiative. Dr. Hong presented the “compass clock of conscience” to honorable guests from various nations. The clock symbolizes that conscience is the guide that leads us toward the right path of life. Dr. Hong invites all nations to jointly celebrate the International Day of Conscience on April 5, 2020 and foster a culture of peace with love and conscience.

Since April 5, 2018, FOWPAL has worked together with the permanent missions of various nations to the UN to promote the culture of peace with love and conscience, and the ideal has resonated with many permanent missions to the UN. In recognition of this initial global cooperation, FOWPAL designated April 5 as the International Day of Conscience. On July 25, 2019, during its 73rd session, the United Nations General Assembly declared April 5 the International Day of Conscience, providing the international community a valuable tool to promote peace, tolerance, inclusion, understanding, and solidarity as well as to build a peaceful, united, harmonious, and sustainable world. FOWPAL hopes that all nations, cities, and families will observe this UN day on April 5. It is hoped that all people will start with themselves, stay calm, honestly look inwards to reflect on themselves, and follow the guidance of their conscience so that everyone’s inherent sincerity and purity will be restored. To date, the Declaration of International Day of Conscience has been translated into 41 languages, and people in 182 nations have endorsed it. 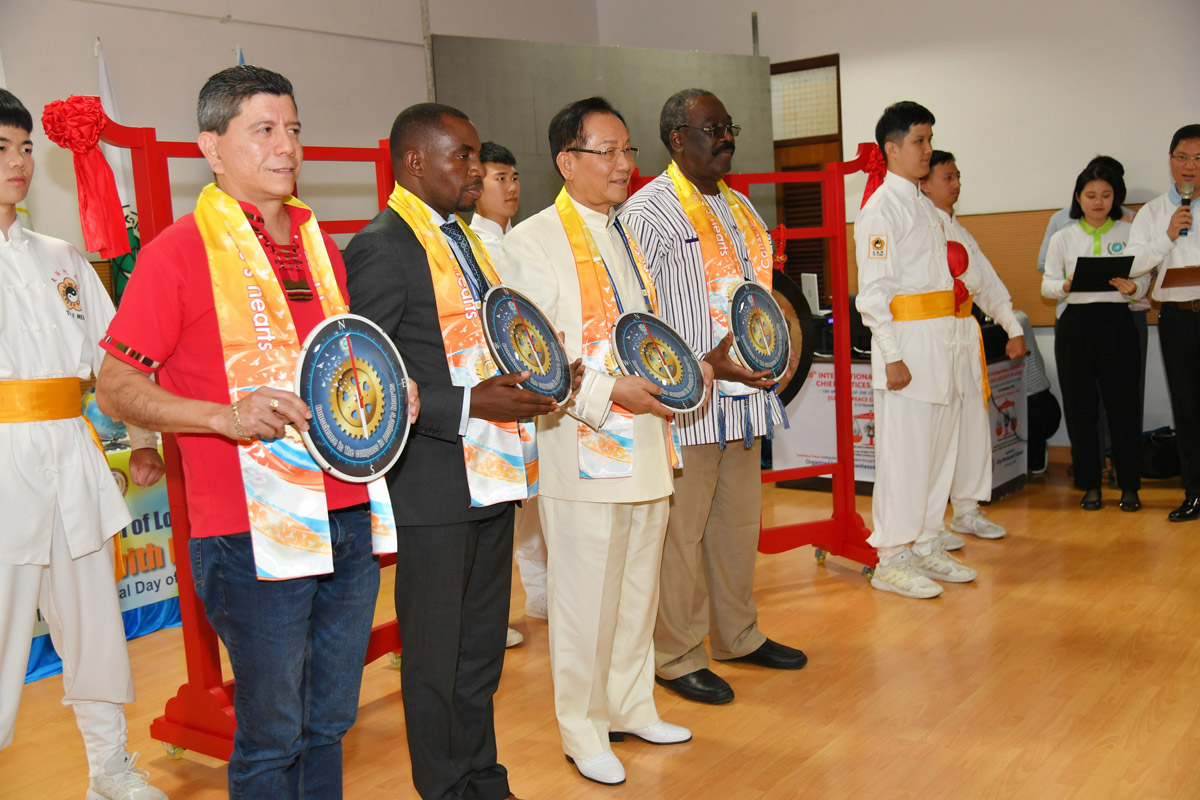 In addition to November 10, FOWPAL also conducted bell-ringing ceremonies on November 9 and November 11. On Nov. 9,  Hon. Mr. Justice Geoffrey Henderson, Judge of the International Criminal Court (Trinidad and Tobago); Hon. Chief Justice of Eritrea Menkerious Beraki; and Hon. President of the Comorian Supreme Court Cheikh Salim Said Attoumane rang the Bell and made wishes for peace. On Nov. 11, Hon. President of the Burundian Constitutional Court Charles Ndagijimana; Hon. Mr. Juan Ramon Lau Quan, Member of Parliament of Guatemala; and Hon. President of Burkina Faso’s Constitutional Council Kassoum Kambou rang the Bell and made wishes for peace. A total of 17 visionary leaders rang the Bell during the four bell-ringing ceremonies. To date, 390 influential leaders in 121 nations have rung the Bell, including 43 heads of state and government and seven Nobel Peace Prize laureates.

Over the years, Dr. Hong has led the FOWPAL delegation to tour the world, conducting cultural exchanges and spreading the messages of love and peace. To date, FOWPAL has visited 101 nations, engaged in meaningful and impactful interactions with the people they met, and received a lot of encouragement and support. FOWPAL has been inviting heads of state and leaders in different fields to ring the Bell of World Peace and Love and make wishes for peace. It is hoped that the peaceful sound of the Bell will spread around the Earth and that the leaders will bring back to their countries the beautiful energy of love and peace they experienced and take positive actions.