The Federation of World Peace and Love (FOWPAL), in Cooperation with the Kingdom of Bahrain, Hosts the World Leader Summit of Love and Peace: Promoting the Culture of Peace with Love and Conscience 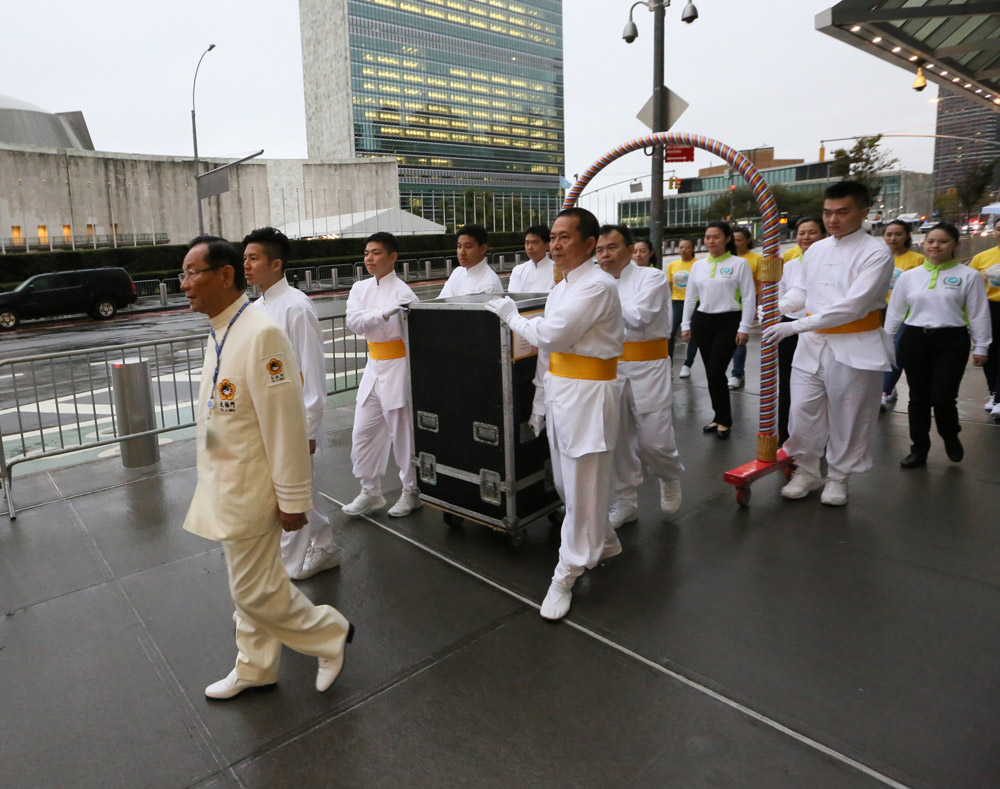 NEW YORK, NY—The Bell of World Peace and Love rang at the United Nations Headquarters for the first time on Sept. 28, 2018, at the World Leader Summit of Love and Peace during the 73rd session of the United Nations General Assembly.

The event was organized by the Federation of World Peace and Love (FOWPAL) in cooperation with the Kingdom of Bahrain to celebrate the 70th anniversary of the adoption of the Universal Declaration of Human Rights and to encourage all to work together for global sustainability and humanity's collective wellbeing.

H.E. Shaikh Hussam bin Essa Al Khalifa, President of the Court of His Royal Highness the Prime Minister of Bahrain, and Dr. Hong, Tao-Tze, President of FOWPAL, had met multiple times exchanging ideas about love, peace, tolerance, and cultural diversity. Sharing the same vision of world peace, Bahrain and FOWPAL co-hosted an event of cultural exchange in New York last September, where H.E. Shaikh Hussam bin Essa Al Khalifa rang the Bell of World Peace and Love. Now, FOWPAL, in cooperation with Bahrain, hosted the summit to promote the culture of peace with love and conscience. At the start of the event, Dr. Hong especially expressed his most sincere gratitude for the support and assistance from the Court of H.R.H. the Prime Minister of Bahrain and the Permanent Mission of Bahrain to the UN. 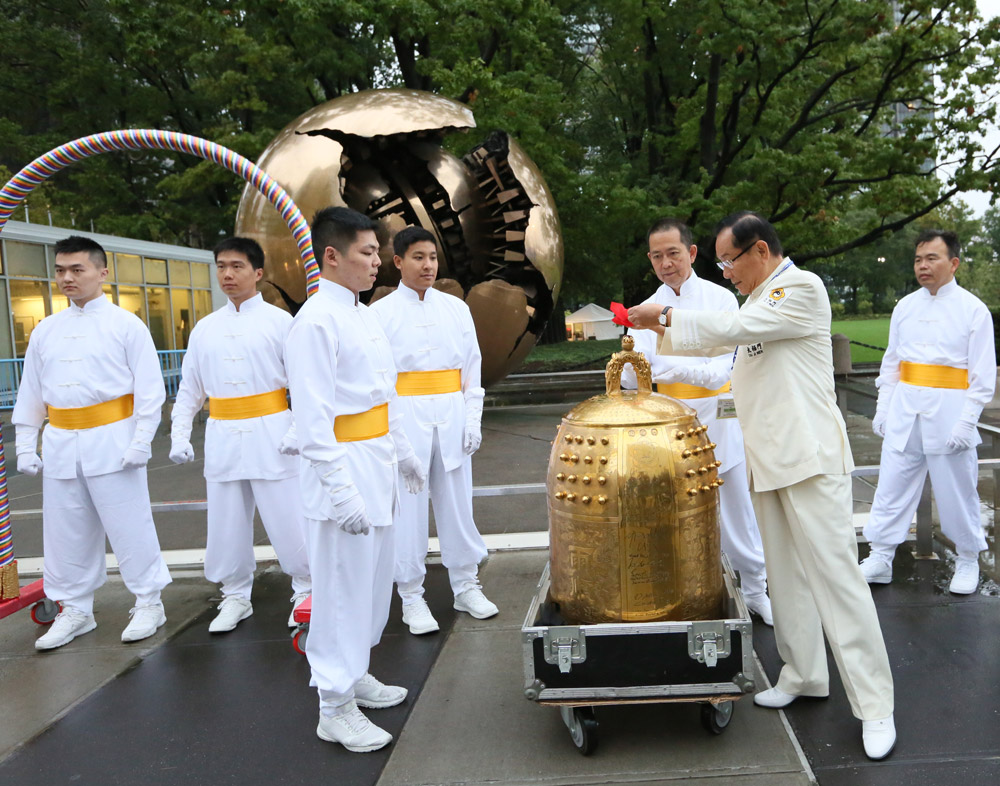 At the summit on Sept. 28, 2018, two visionary leaders rang the Bell: H.E. Mr. Waheed Mubarak Sayyar, Undersecretary of Regional and GCC Affairs of Bahrain’s Ministry of Foreign Affairs, and Mr. Julio B. Pujols, Counsellor of the Permanent Mission of the Dominican Republic to the UN. H.E. Mr. Waheed Mubarak Sayyar wished for “peace and love for all the world.” Mr. Pujols wished “for a world with no maladies, no weapons of mass destruction,” and wished love and peace to spread around the world, evil to disappear from the Earth, and happiness to be enjoyed by the whole world.

The Bell has traveled across the planet, reaching out to every culture and every community and spreading the energy of peace on significant occasions. Since 2000, the Bell has been rung by 310 influential leaders in 100 nations, including 38 heads of state and government, 7 Nobel Peace Prize laureates, UN ambassadors, and other visionary leaders. The Bell was also rung during the World Summit on Sustainable Development (WSSD) held by the United Nations in Johannesburg, South Africa in 2002 and during the United Nations Conference on Sustainable Development in Rio de Janeiro, Brazil in 2012. Through the bell-ringing ceremonies, the bell ringers’ kind intentions for a better world were consolidated to inspire more people to promote the culture of peace with love and conscience in their nations and across the Earth. 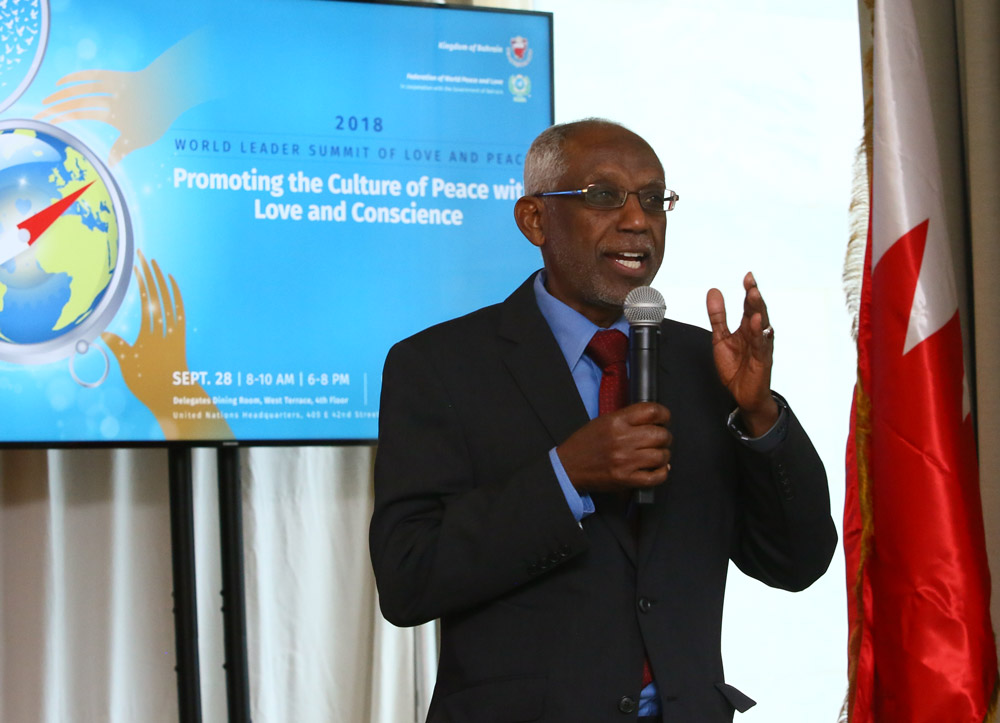 “A very simple golden round-shaped bell like this can change the world if our hearts go with that sound, the sound of world peace and love,” said H.E. Mr. Taneti Maamau, President of the Republic of Kiribati, at the summit. This was the third year President Maamau attended the World Leader Summit of Love and Peace. He rang the Bell in the 2016 summit and delivered a speech in the 2017 summit. Then the Kiribati Mission and FOWPAL worked closely together to promote peace and co-hosted the World Peace and Love Conference at the UN Headquarters this April. In honor of President Maamau’s efforts in the promotion of peace, Dr. Hong, Tao-Tze, President of FOWPAL, presented to President Maamau the World Peace and Love Award and a certificate of recognition during this year’s summit.

“Conscience is the root of all human kindness. It is the window to our souls and the origin of wisdom. It enables humans to attain inner peace, happiness, health, and security. It enables us to broaden our hearts and become compassionate," emphasized Dr. Hong, Tao-Tze. We need more governments like the Kingdom of Bahrain, which has been fostering peace, tolerance, and diversity, to work together with nongovernmental organizations to promote the culture of peace with love and conscience so that global peace, security, and prosperity will truly become a reality! 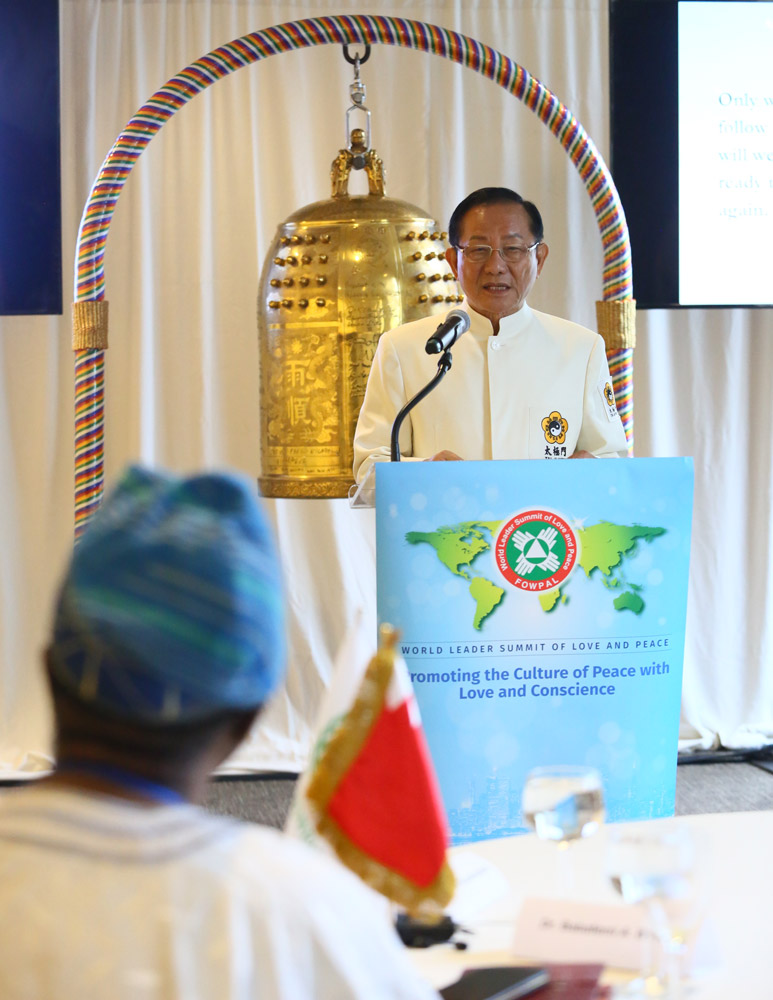 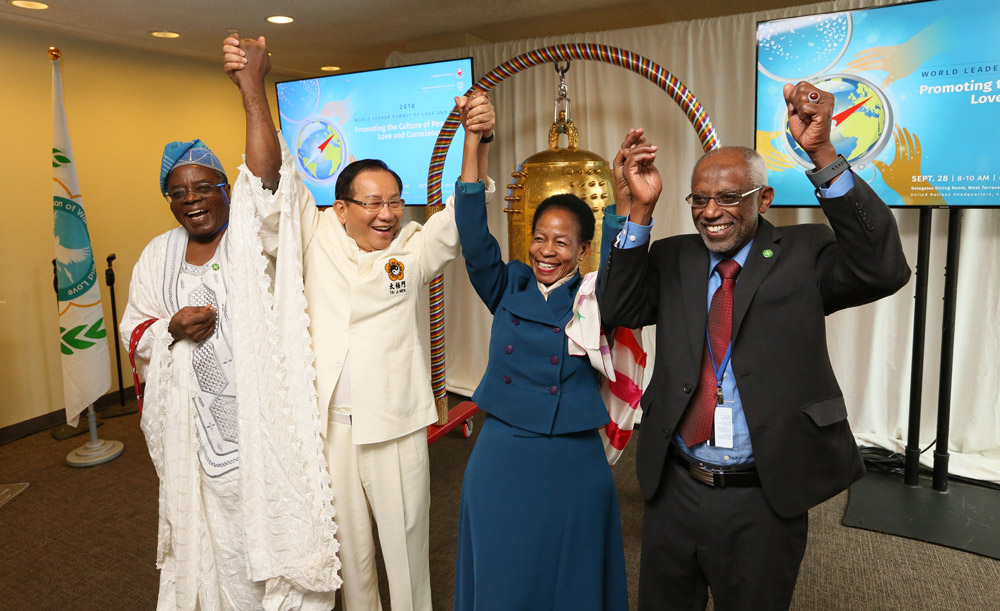 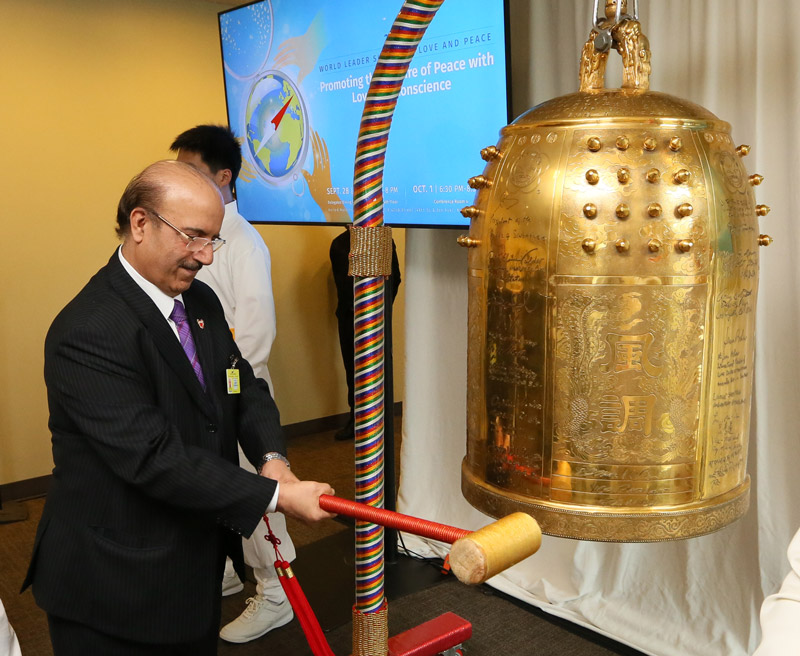 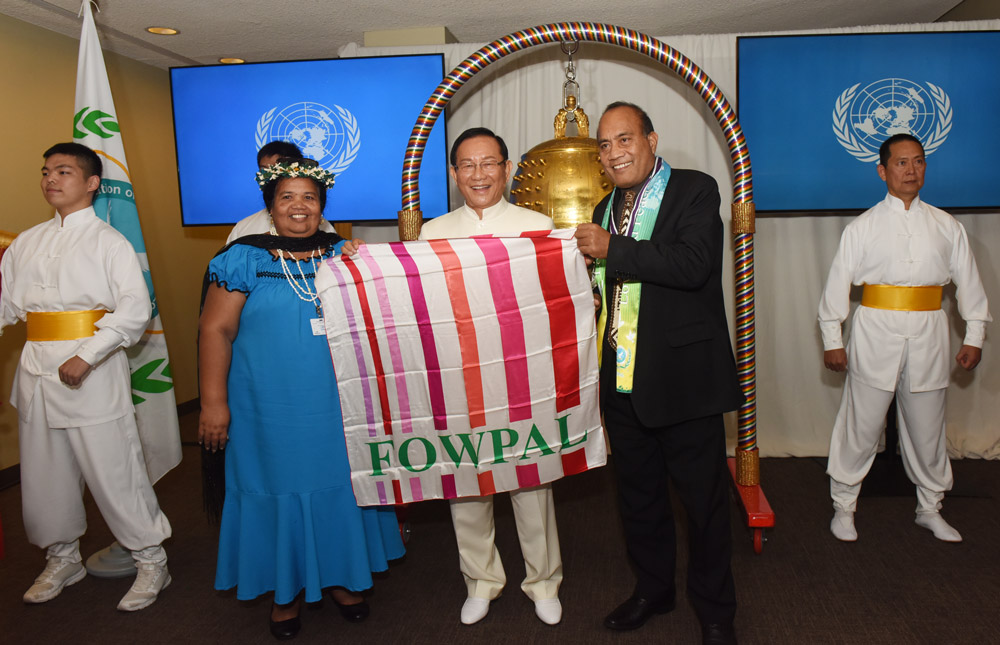 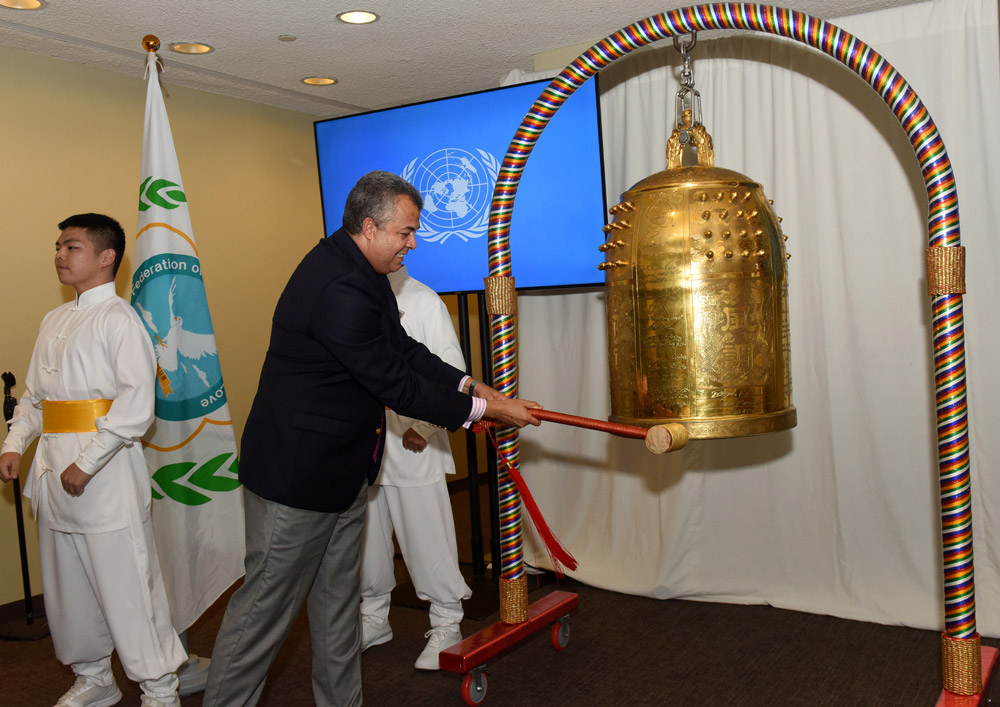