April 5, 2021 marks the second International Day of Conscience. The Federation of World Peace and Love (FOWPAL) hosted two virtual events to celebrate this significant day. It received greetings, warm wishes, and messages of conscience from many incumbent and former heads of state and government as well as visionary leaders from around the world, including the President of Malta; the Prime Ministers of Belgium, the Czech Republic, and Ireland; the Minister of Culture of Portugal; and the Secretary General of OECD. The two online events received over 20,000 views.

Dr. Hong, Tao-Tze, President of FOWPAL, delivered welcome remarks, saying, "I would like to thank many international friends and organizations, countries, and the United Nations for their endeavors, as our collective efforts have made the International Day of Conscience possible. It is a day of conscience for all humanity. This day belongs to every world citizen and has a profound meaning."

Dr. Hong also emphasized the importance of conscience for individuals and the world: "The world is volatile, but we can secure our hearts with ‘Oneness,’ which is conscience. Things change as the circumstances change, but we should adhere to conscience and noble deeds regardless of changes in circumstances. Only our conscience can save our souls, and only conscience can save our world. I invite you all to start practicing love and conscience in everything you do and inspire those around you to realize their era of conscience to jointly create a world of happiness for all humanity. Let us move forward happily together for a world of peace. Let us work together to give humanity an opportunity to move towards peace and sustainability and share a happy, fulfilling, and true era of conscience!”

H.E. Mr. Teburoro Tito, former President of Kiribati and current Permanent Representative of Kiribati to the UN, stated, “As a partner and supporter of FOWPAL’s great efforts in this global mission, the Republic of Kiribati is happy to join this celebration together with other partner countries, in particular the Kingdom of Bahrain, which had provided good leadership in the intergovernmental negotiation in New York two years ago that led to the United Nations’ declaration of April 5 as the International Day of Conscience.” To encourage everyone to be conscientious, he presented a beautiful song he composed titled, “Everybody Needs Your Love and Care.”

H.E. Dr. Ameenah Gurib-Fakim, former President of Mauritius, said, “We know how much FOWPAL has been active in making us think differently, in making us do things with our conscience.” She urged people to live sustainability: “We have to really think out the way we do business because the way we are overshooting our consumption, it's as if we have four planets and yet we only have one planet.”  “Today is the day that we have to celebrate our conscience and how we use the International Day of Conscience to spread positive influence of the way our conscience operate and how we should listen to our conscience,” she added. 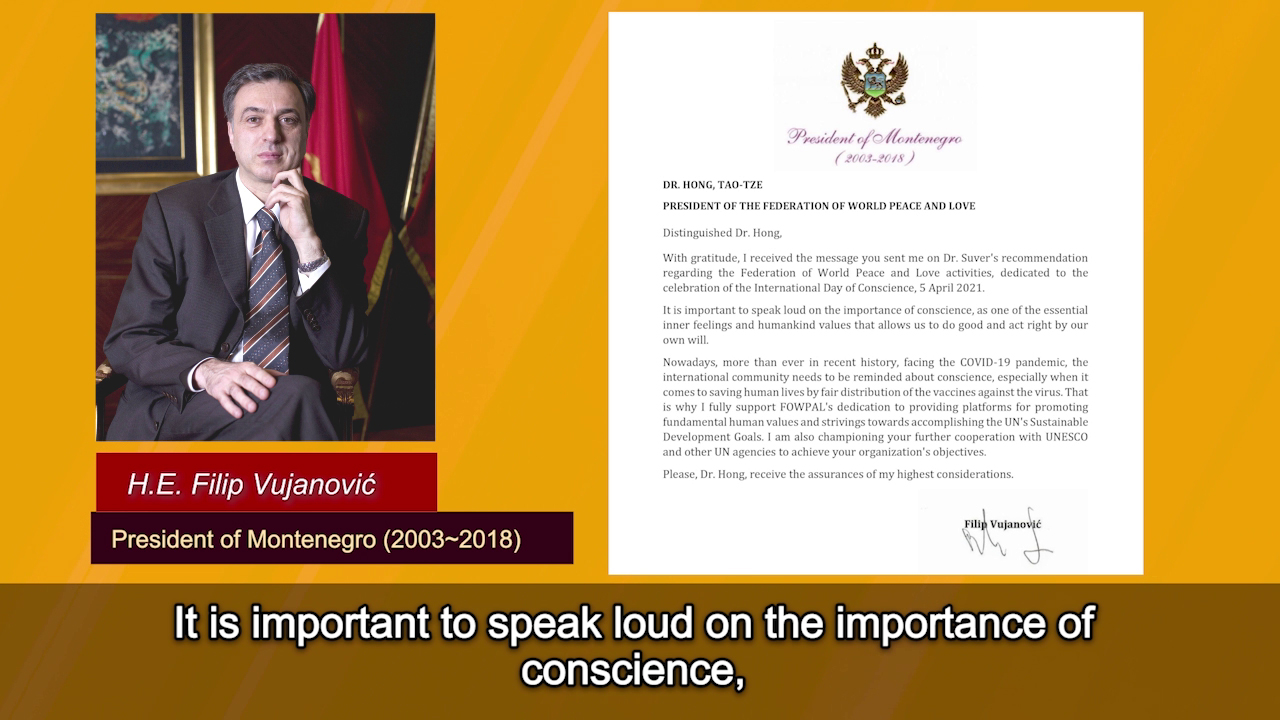 H.E. Ms. Rosalía Arteaga Serrano, former President of Ecuador, emphasized the importance of respect for others, appreciation of diversity, and peaceful coexistence. She shared how she overcame her sadness when her second child, who had Down Syndrome, passed away at the age of 10 months, by reaching out to others in similar situations.

H.E. Mr. Anthony Thomas Aquinas Carmona, former President of Trinidad and Tobago, shared how he, through conscience-driven action, transformed and saved lives and implemented a project to uphold restorative justice when he was a judge, ensuring that it is “a justice that heals rather than a justice that bleeds.” He also highlighted the importance of conscience in leadership: “A leader in every country should be the epitome of moral conscience for the society at large. You lead by example.”

H.E. Mrs. Reema Harrysingh-Carmona, former First Lady of Trinidad and Tobago, lent her voice to the advocacy for women empowerment and against child marriages. She said, “Through conscience-driven advocacy, many homes over the years have been transformed into repositories of progressive thinking and facilitators of female empowerment and equality.”

“In order to overcome all this, we must return to the notions of education and conscience,” said H.E. Mr. Petru Lucinschi, former President of Moldova, acknowledging the challenges the world faces and recommending that “we need to reduce the money that goes into armament and provide these sources to education and medicine.”

H.E. Dr. Emil Constantinescu, former President of Romania, highlighted the importance of preserving a clear conscience and an education predicated on moral values, adding, “I deeply believe that when we speak of conscience we must also consider how to best organize our own lives in the spirit of the moral values to which we aspire.”

H.E. Ms. Roxanna De los Santos de Piantini, Alternate Ambassador of the Dominican Republic to the UN (Vienna), stated, “Each and every one of us, habitants of our beloved Planet Earth, take full responsibility of our actions and start living in a culture of peace, love and consciousness, we will all be better off from our small communities expanding this awareness to our big cities and throughout the entire world.”

H.E. Talat Xhaferi, President of the Assembly of the Republic of North Macedonia, urged everyone to take action of conscience: “We have a moral and ethical obligation first to ourselves and then to convey that sense of responsibility to all, to care for the other, to take care of every single person so that every child is fed and never stop smiling.”

H.E. Mr. Sergio Duarte, former UN High Representative for Disarmament Affairs, stated that “The decision to institute the International Day of Conscience is an important landmark for the achievement of a culture of peace since the power of conscience is a necessary tool for the realization of this endeavor.”

“Empathy, compassion, conscience, these are all the things we need a little more of not only now but in weeks and years to come,” said U.S. Congresswoman Norma Torres. She commended FOWPAL’s efforts, saying, “The Federation's mission is exactly what we need to promote an environment of inclusion through understanding.” “We have the ability to empower those around us by embracing all that this date celebrates,” she added.

Honorable Ms. Selima Ahmad, Member of Parliament of Bangladesh, urged everyone to work together for peace. “With togetherness, we can do it and we need to also follow the principle of conscience because that will give us guidelines so that we can make a better world for ourselves, for our elderly generation and also for our children.”

California State Senator Susan Rubio said, “Today as we celebrate International Day of Conscience, let us recommit ourselves to reaching out to others and fostering a common humanity. It will unleash a spring of giving and goodness. Let that be our mission moving forward.”

California State Senator Josh Newman recognized the various challenges in the world and said, “That’s why the International Day of Conscience was created to tackle the root issues at the heart of continuing violence around the world.” He commended FOWPAL’s tireless efforts to instill the idea of peace and love to promote a prosperous world and conveyed his commitment to assisting FOWPAL in its future endeavors for peace.

Judge Antoine Kesia-Mbe Mindua, Vice-President of the International Criminal Court, stated, “Conscience is really instrumental for peace, love and brotherhood among nations. The concept of ‘conscience’ is commonly used in its moral sense. It is the inherent ability of every healthy human being to perceive what is right and what is wrong, and on the strength of this perception, to monitor, evaluate and execute actions.”

Dr. Werner Fasslabend, former Defense Minister of Austria, stated, “I think this is a great idea and a great initiative of Dr. Hong, because if everybody follows his own conscience, the world will become better and more peaceful every day.”

Dr. Akkan Suver, President of the Marmara Group Foundation, stated, “We cannot reach peace nor stability unless conscience takes part in schools, places of worship, and life. That is why I care about Dr. Hong, Tao-Tze and his friends as they lead on such an issue. Congratulations. I hope that our work will open a new window in the house of peace and stability of humanity.”

“You have to let that voice speak from within! Because it is your closest and most trusted friend and confidant; and your conscience, most importantly, won’t lie to you,” said Dr. Kuiljeit Uppaal, the world's first image scientist and impact strategist and a recipient of the prestigious Karmaveer Chakra Award, instituted by the UN, adding, “Goodness triggers goodness, and grows multi-fold. If I am good to you and I respect you and your rights as a human being, chances are very strong that you will also be good to me, and respect me and my human rights. So conscience has the capability to create a monumental difference in human behaviour and relations.”

"It's within my conscience, my integrity, my desire to help mankind. I know that helping our children and our families be free of drugs is very important,” said Dr. Bernard Fialkoff, President of Drug Free World Americas. He urged everyone "to bring mankind to a higher level, and one day we will all look back and see what we have accomplished.”

Additionally, many other visionaries also sent in their messages of conscience in support of the celebration. Ever since the first International Day of Conscience in 2020, FOWPAL has organized 24 virtual events to honor various UN days, connecting leaders of conscience around the world to promote a culture of peace with love and conscience together. These events, broadcast on ICDAY’s (International Conscience Day) social media platforms, have attracted over 3.3 million views worldwide.

With the collective efforts of all nations, organizations, and individuals, FOWPAL hopes that the power of conscience will ripple across the planet to transform the world and usher in a world of love and peace for current and future generations!