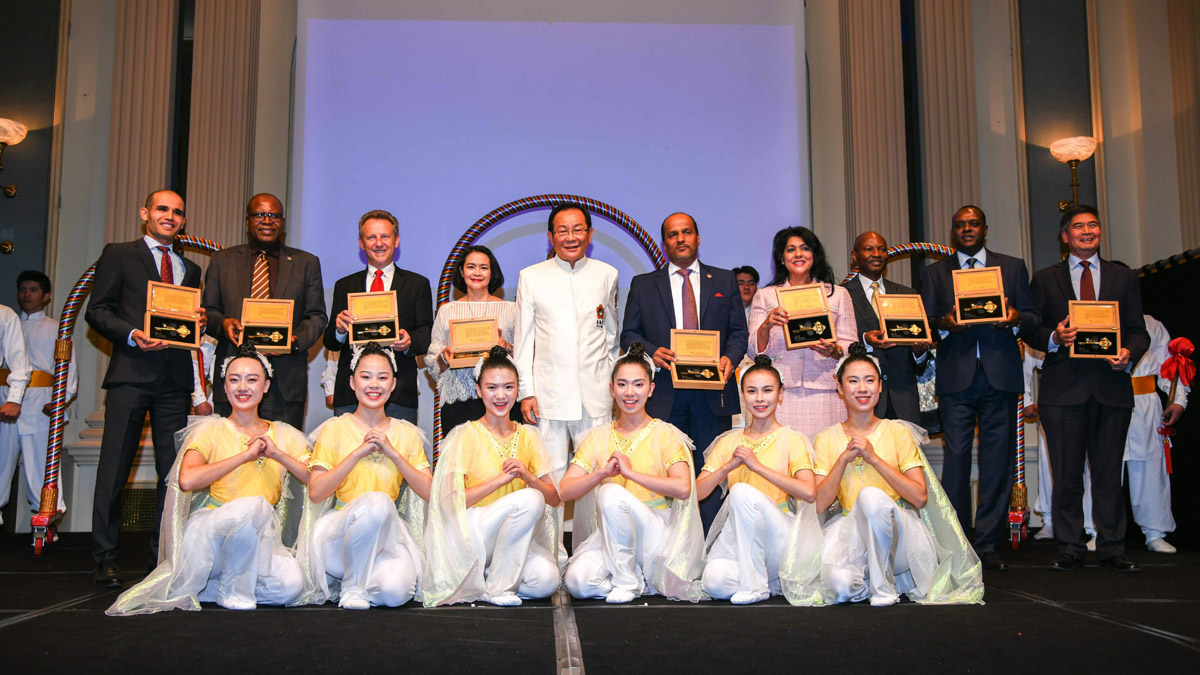 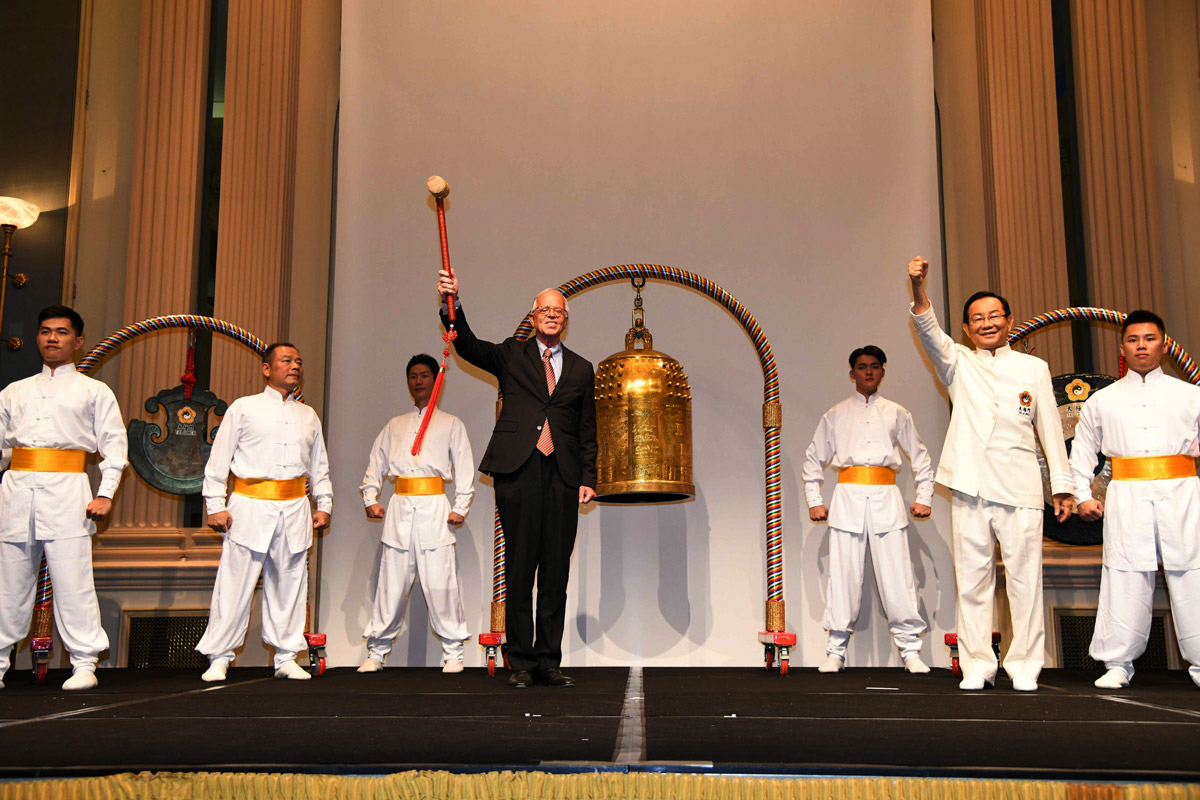 Dr. Hong, Tao-Tze, President of FOWPAL, delivered a speech, stressing, “All efforts in technology and economic development should eventually follow the laws of nature to advance human development while striking a balance between spirituality and technology as well as between yin and yang. That is the focus of sustainable development. Since ‘love and peace’ are the common aspirations of all humanity, we believe that the promotion of all human activities that are driven by ‘conscience’ will form ‘the culture of peace,’ which will benefit all world citizens.” He continued to say, “In this era, we need a ‘new Renaissance’ and a rebirth of the ‘culture of the heart.’ We need to carry forward the essence of excellent cultures and revive them with creativity.”

FOWPAL chose to host a ceremony of ringing the Bell of World Peace and Love in Vienna, spreading the messages of love and peace, because the presidency of the Council of the European Union is currently held by Austria and because Austria has been a permanent neutral country and has placed great emphasis on security, culture, and positive values. Mr. Ernst Woller, First President of the Vienna Parliament, was the first person to ring the Bell on this significant occasion as the ceremony of ringing the Bell was hosted in Vienna for the first time.

A dedicated promoter of love and peace, Dr. Hong, Tao-Tze has been admired and respected by many leaders across the globe and has been a good friend and mentor of them. H.I.R.H. Herta Margarete Habsburg-Lothringen, President of the Flame of Peace, presented the Flame of Peace Award to Dr. Hong for his tireless efforts in promoting love and peace across the planet. Dr. Hong awarded Their Imperial and Royal Highnesses Sandor and Herta Margarete Habsburg-Lothringen FOWPAL’s certificate of “Honorary International Ambassador of Peace.” 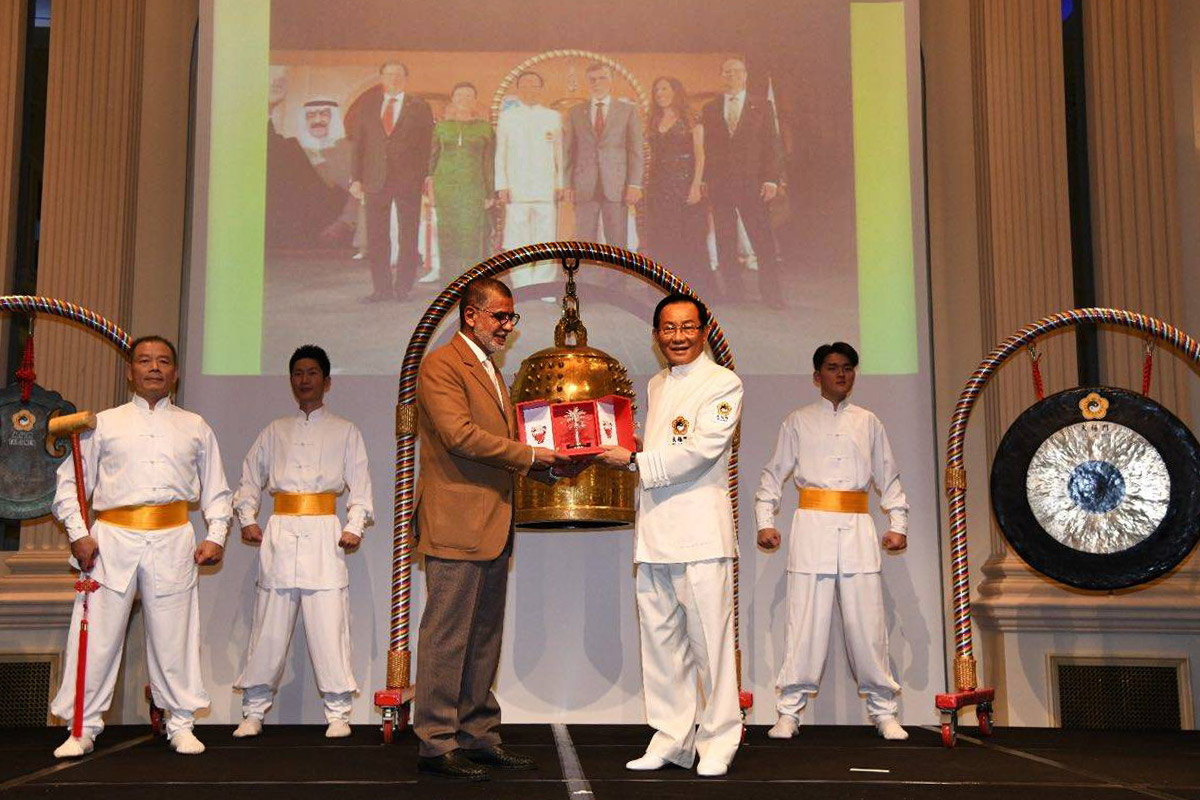 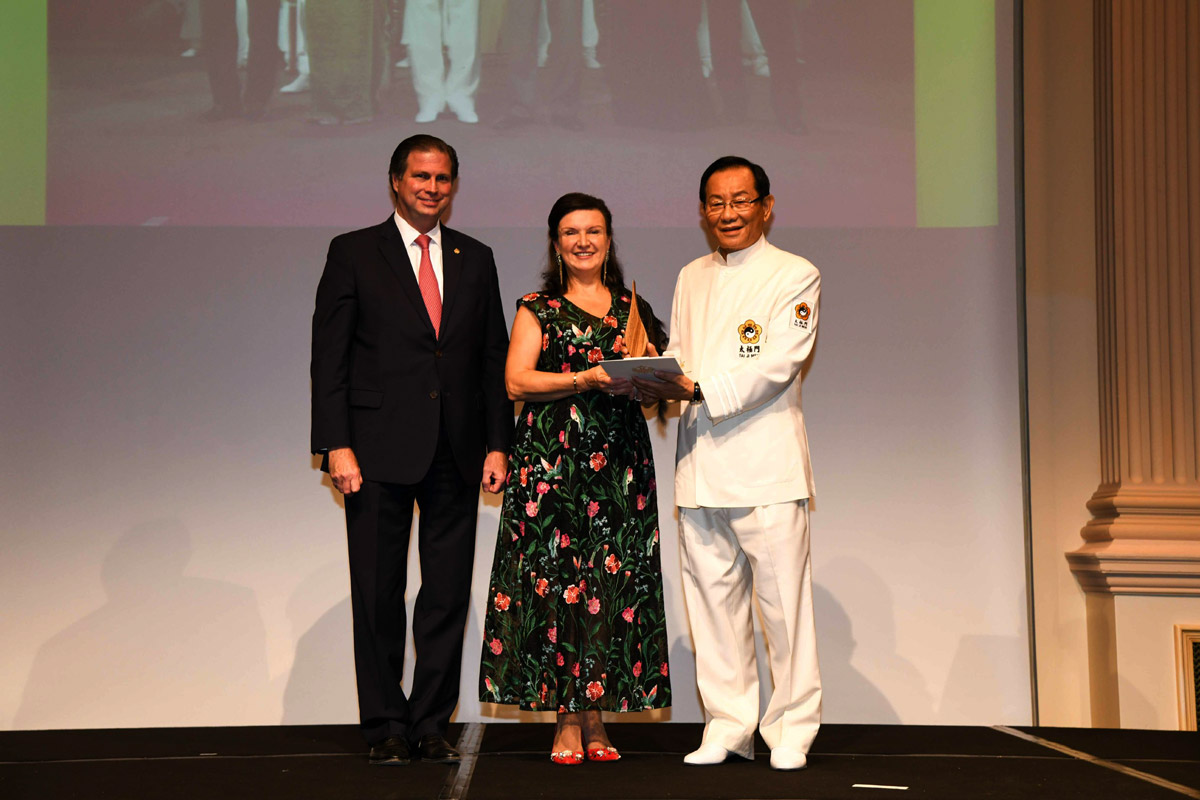 H.H. Prince Bernard Ndouga from Cameroon made a wish for world peace and thought that everyone should do his or her part for world peace. His Highness remarked that the cause of human suffering is selfishness, so he was thankful to Dr. Hong for selflessly encouraging people to work for world peace.

FOWPAL’s  “2018 Love of the World Cultural Goodwill Group” presented amazing cultural performances at the summit. FOWPAL volunteers conveyed the messages of love and peace through Eastern martial arts presentations as well as rich and diverse music and dance performances. A team of young ladies from FOWPAL, in beautiful blue kung fu costumes and with long swords in their hands, presented a powerful and yet elegant sword dance, expressing love, kindness, courage, and tenderness. A group of modern-day knights-errant demonstrated confidence, vitality, and strength while performing  “double staffs, ” “kung fu fan,” and “Chinese boxing.” Their performances embodied the spirit of martial arts, which is to promote goodness and stop conflicts. FOWPAL’s “angels of love and peace” spread their wings, radiating boundless energy of love and happiness to the attendees. The event also featured a graceful dance once only accessible to the ancient Chinese royal court, an auspicious lion dance, and a singing presentation in an ancient Eastern style. On top of that, a singing performance titled “Que Sera, Sera,” well-known to the locals, and FOWPAL youth’s energetic singing and dancing brought the participants closer together as all danced to the music, filling the entire room with powerful happy energy! 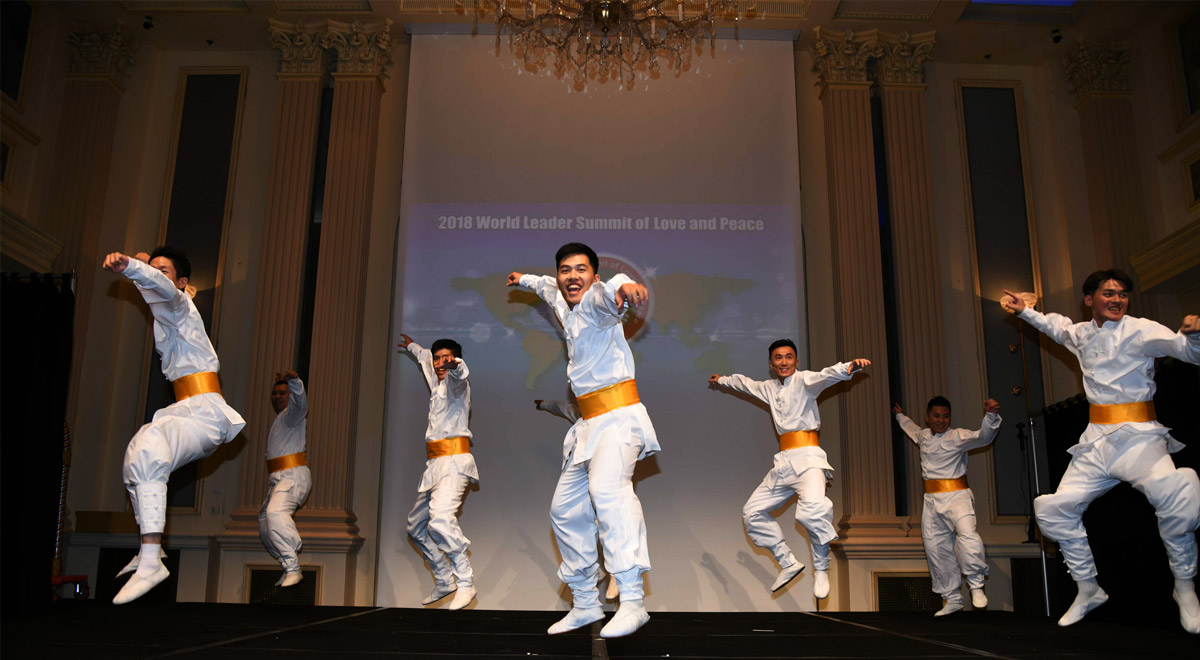 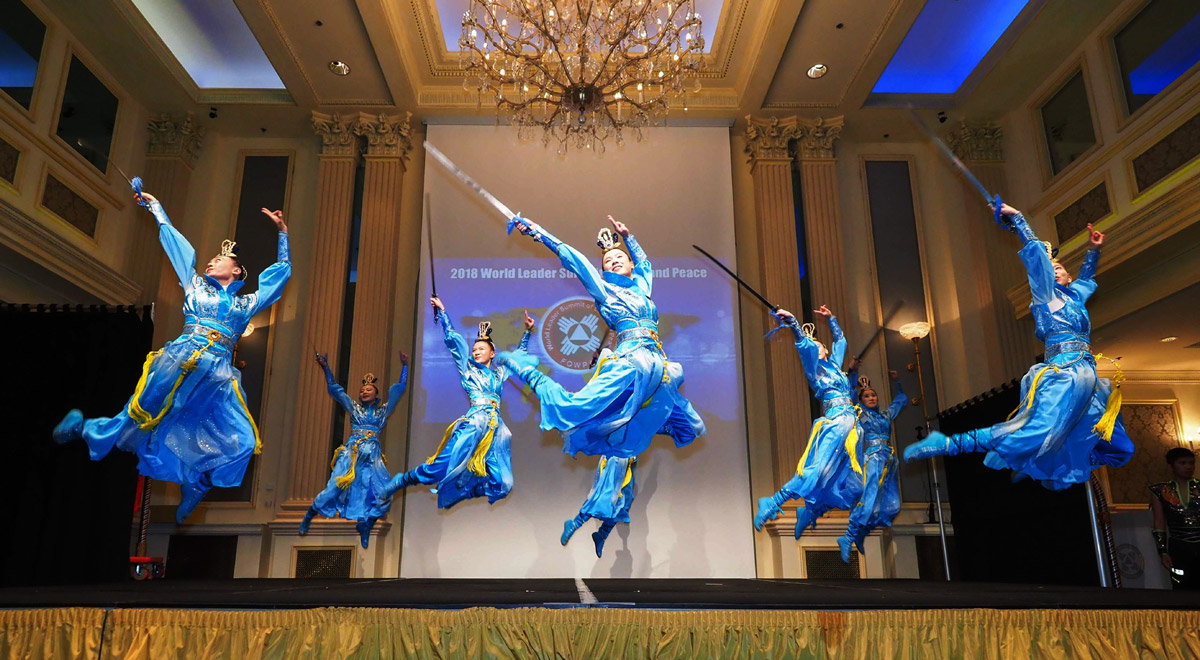 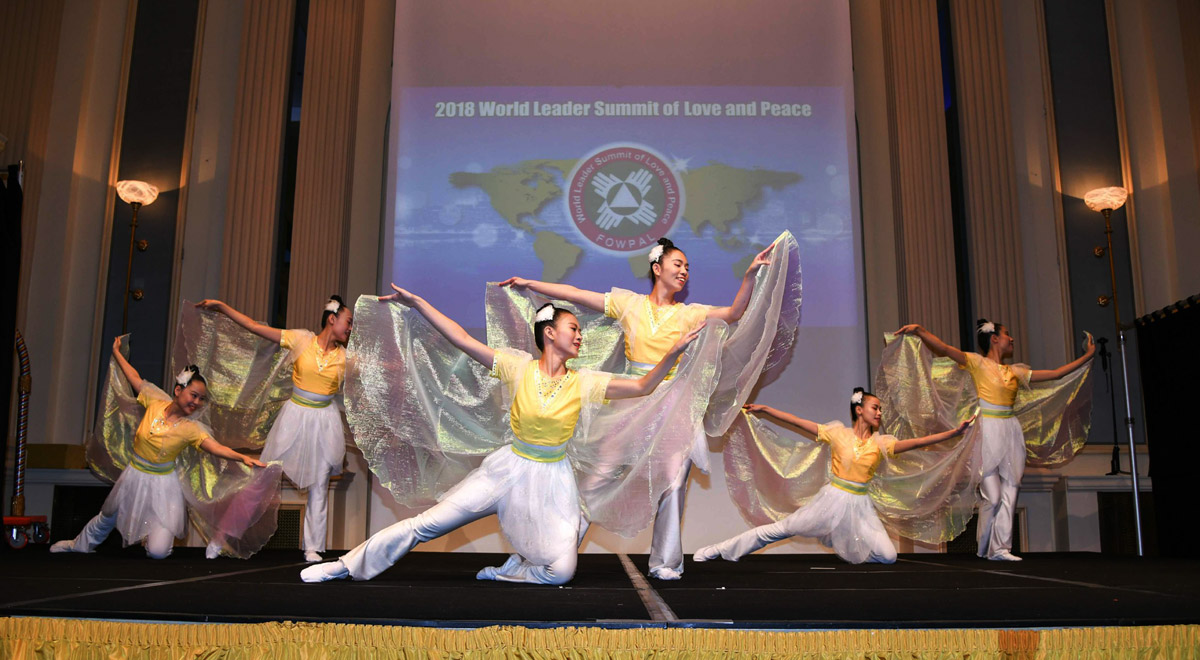 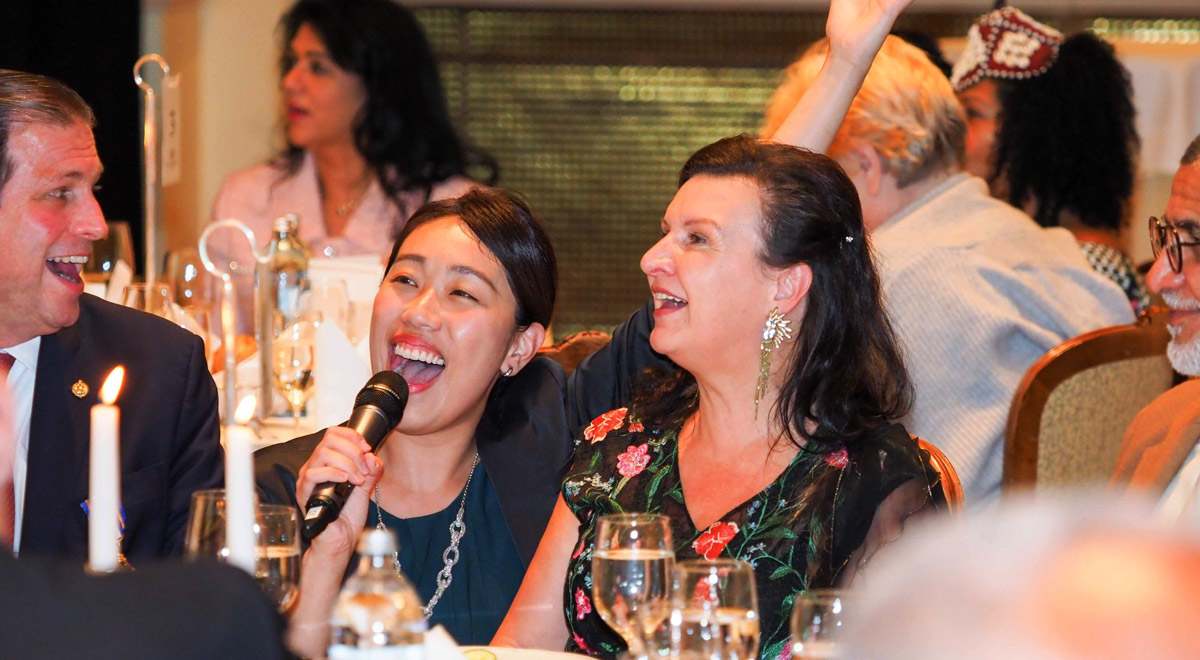 〔Video〕2018 World Leader Summit of Love and Peace in Vienna